Why We Must Look To Past To Save India’s Forests 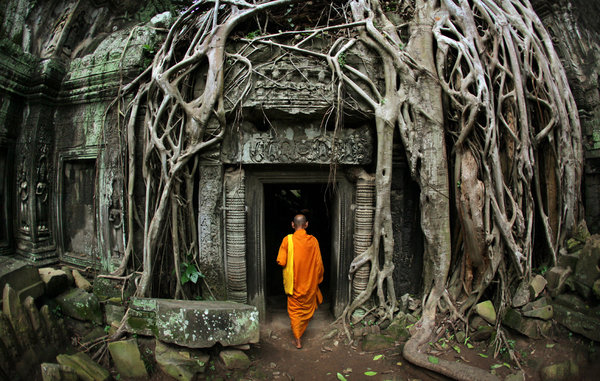 Indians believe in the virtue of worship. From idols of animals to worshipping mountains and nature, living in harmony has been an integral part of our culture. From the bamboo forests of the eastern coast, thicket trees of the northwestern desert, the tropical south to the dense Himalayan forests of the north, everything is considered sacred.

Ours is a long history of nature worship and even today, the legacy continues through the worship of forest groves.

Local communities incorporate social traditions, spiritual and ecological values to protect these groves, often considered the abode of spirits of local deities or ancestors. Even as the world moves towards modernity, these communities have preserved rare species of flora and fauna for generations, and they continue to do so.

The Bishnoi community is considered the first environmentalists of India. They are born nature lovers. Back in 1730, the Bishnoi, who follow a tribal religion formed on the foundation of protection of trees in Rajasthan, sacrificed their lives to protect trees. They have, for centuries, married eco-conservation with their faith, making it one of the most ecologically relevant orders of today. Reverence for nature and all forms of life is what makes a true Bishnoi.

Bishnoi women’s non-violent demonstrations by hugging trees became the inspiration for the Chipko Movement against tree felling in Uttarakhand in 1970. According to Bishnoi member Johra Ram: “Any change in the world is bound to start with us. All the talk about nature and wildlife conservation will be more effective if everyone considers the Earth as a living, breathing heritage. We must also fight for nature’s survival, like the way we fight for our lives.”

The existence of sacred natural forests in India dates back to the pre-agricultural and hunting era. Its documentary reference is found in ancient texts such as the Rig Veda and the Atharva Veda.

Considering trees as manifestations of gods and ancestors, many communities reserve areas of their forests as sacred and establish rules and customs to ensure their protection. These rules may differ from one forest to the other, but the basic objectives are similar — such as no cutting of trees, no collecting any material from the forest, and banning animal hunting.

As a result of these protective restrictions, the sacred groove — an important source of biodiversity — have been preserved for eons.

Like its people, even India’s forests are full of diversity. Some have a few trees while others have trees spanning hundreds of acres. In some, the dense forest areas are within large forested areas, while some exist as open plains or tree islands in deserts. Many sacred forests have water resources such as lakes and rivers, and the vegetation that covers the land absorbs water during the rainy season and frees it up in times of drought. Trees improve soil stability, reduce soil erosion and provide irrigation for agriculture in dry weather.

In many forests, annual rituals are performed to appease ancestors or deities and for the well-being of the community. People follow the practice of offering terracotta idols in exchange for wishes such as good health or the harvest of a freshly grown crop or the birth of a child. The offering of terracotta idols in forest and hill temples has been integral to the tribal tradition in many parts of Gujarat. Such terracotta idols of deities can be found in Ambaji in north Gujarat, Pavagad in the Panchmahal region of east Gujarat and in the Dang and Dedhiapada region of south Gujarat.

In every forest of the Bhil community in Ratanmahal in Dahod district, people see forests as the abode of the souls of their ancestors. Avan has been known as the Forest of the Gods. The forest areas have been protected through restrictions such as bans on cutting trees and cultivating the land under any circumstances.

In the Dakshina Kannada and Udupi districts of Karnataka, the sacred forest known as Nagabanas has long been used for the conservation of specific species of animals such as the king cobra and the Indian rock python.

According to tradition in Tamil Nadu, Kovilkadugal is an intrinsic feature of the ecological heritage but the last remnants of this sacred forest park are the forests that once flourished in these areas. In the shade of dense trees there is a temple, usually of the mother goddess, which is worshiped by the local community to preserve both the atmosphere and the sanctity of the forest. Many prohibitions and customs set in the past still exist. The tradition of associating trees with gods and goddesses was also a part of the Sangam literature of the Tamil language.

In the Khasi mountains of north-eastern India, there are forests controlled and monitored by a religious purpose known as Lo Lingdoh, Lo Kintang, and Lo Niam. The use of timber or forest produce for commercial or household purposes is strictly prohibited. The only exception given is to religious rituals. To obtain wood for religious purposes permission is obtained from the chief forest officer. For this, leaders of the Khasi community have been given limited rights to the forest officials.

Many conservationists and communities, along with governmental and non-governmental organisations, have come to understand that development, progress and modernity do not mean turning away from tradition. Instead, traditional wisdom can be integrated into modern systems.

Bringing this to the notice of regional protection mechanisms and mobilising their efforts is much needed. Awareness campaigns for sacred forest parks in communities and schools, proposals to educate people about the value of biodiversity conservation and to encourage the revival of traditional practices is the need of the hour.

Traditional customs and beliefs combined with scientific logic are the crucial reason behind the protection of such sacred forests. The government and citizens at large need to understand their own responsibility to protect and nurture our forests, which are part of our legacies.

We need to own up to our responsibility before it’s too late.

What Erwin Schrödinger Said About the Upanishads

Massive Asteroids To Fly Past Earth In 2 Months