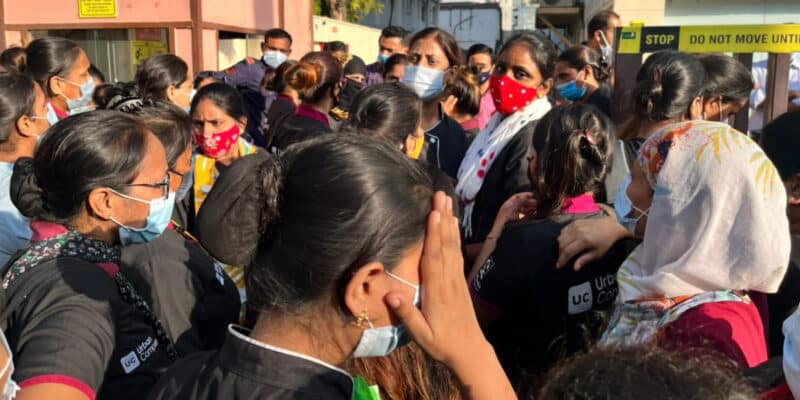 More than 100 female beauticians from Urban Company hit the street protesting against the pay scale, working conditions, and absence of insurance.

This incident has come to a blow in the face of Urban Company, Which has been riding on an ego trip dependent on these elements for some time now.
Urban Company was among the top business organisations to offer better conveniences and working conditions to the gig labourers that have been associated with them. Just ten months prior to this, the Fairwork India Ratings 2020 Report —gave Urban Company a score of 8 on 10. This rating depended on a few components including reasonable pay scale, contract, the executives, representations, etc.

So, the biggest question which arises is — What went wrong in these 10 months?

While the ladies challenged the Urban Company outside their office in Gurgaon, Urban Company shared a statement featuring every single part of their business according to the grumblings raised by these ladies.

Perhaps, there is a much larger picture that is getting missed.
Zomato or a Swiggy, a Uber or an Ola, this lot of organisations share a common trait — all of them started off with extensive offerings for these gig workers.

From better compensation to adaptable working hours, from protection to impetuses — and so on and the rundown was brimming with it. In any case, as these stages increased and the job of gig labourers expanded further their significance, be that as it may, diminished.

The explanation was basic — the interest for work was high and the inventory was higher. No big surprise these equivalent specialists have now moved to the Supreme Court looking for greater responsibility on these organizations’ parts and better working conditions.

Public general secretary of the Indian Federation of App-based Transport Workers that recorded the supplication in the summit court, Shaik Salauddin, highlighted that these platforms had much better offerings when they started off and that is why several workers switched to them. However, as these businesses scaled the conditions of these “partners” deteriorated substantially.

Financial advisory firm Valpro’s director Neha Khanna also highlighted in this regard, that as any company scales up, their overhead costs increase as well. This can include marketing expenses, operation costs or more. So cutting a higher percentage out of gig workers is an easier way to generate more revenue, and that is majorly why the gig worker’s conditions depleted further

While it is still too soon to say whether Urban Company is taking off for a similar route, it is most certainly something that the organisation, and the workers, must stay cautious about.

Urban Company’s co-founder Varun Khaitan guaranteed that they have taken in a few examples from different organizations and plan to scale their business economically, without eating into the income of these accomplices.

“The Fairwork report features that our functioning model is practical,” Khaitan added. Metropolitan Company — esteemed at $2.1 billion — has more than 40,000 help experts on its foundation and plans to add another 15,000 to fulfill the developing needs”