1,100 crore projects launched in Gujarat and that’s not even the beginning of 2022 elections campaign 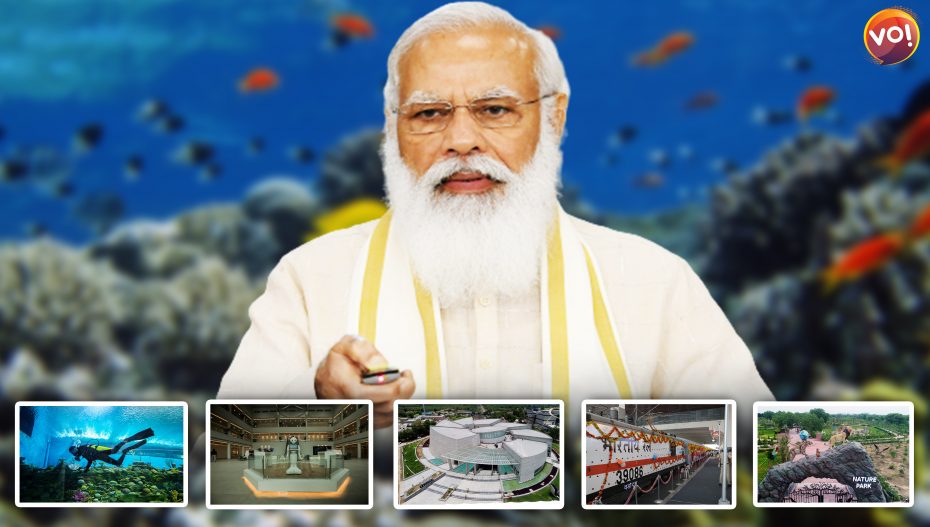 After laying the foundation stones of development projects in Uttar Pradesh; now it’s time for Gujarat. On July 15, PM Narendra Modi inaugurated projects worth Rs 1,500 crore in Varanasi and today he launched over 11 projects worth 1,100 crore projects in Gujarat.
The commonality between the two states—UP and Gujarat—is its importance in the 2022 assembly elections. As a Gujarat ka beta and an MP from Varanasi; Modi knows how crucial both states are in the forthcoming elections. A defeat in these states can be a big hurdle for Modi, and he knows it well.
In the past 2017 elections, BJP couldn’t achieve the 100 seat mark in the 182-seat assembly. Known for his groundwork and strategic planning, Modi oversaw all arrangements for the mega inaugurations in both states—a step closer to his endgame.
Both the states are headed for elections next year – UP early in 2022 and Gujarat towards the latter half – and they are likely to remain the top priority for the BJP. Amit Shah represents the Gandhinagar constituency in Lok Sabha and personally oversaw all the arrangements for the inauguration of the projects.

“We don’t want to make buildings; we want to bring world-class infrastructure in Gujarat and set it as a benchmark. As soon as time permits, I will visit Gujarat personally to see the projects inaugurated today,” PM Modi said over a virtual event about the projects launched in Gujarat.

Gujarat CM Vijay Rupani emphasised railway projects as he said, “For eons, Gujarat didn’t have strong connectivity through railways but now, we finally got justice. Even in the tough times of Covid when the world has come to a standstill, PM Modi brought ‘Vikas’ to the state.”
To woe Gujarat, he inaugurated multiple development projects in Gujarat via video conference. Home Minister Amit Shah, Gujarat Chief Minister Vijay Rupani and Railways Minister Ashwini Vaishnaw also joined the event. The projects include:

Spread over 11,000 sq metres, the project costs Rs 127 crore. It has over 200 robots of 79 different types. It includes humanoid robots and machines that can interact with human beings.

With 68 large tanks and aquatic species from across the world, the 28-metre walkway tunnel costs Rs 260 crore. Home Minister Amit Shah said the Aquatic Gallery and Robotic Gallery at the Science City will prove to be very important for students interested in science.

Vadnagar railway station, where PM Modi is said to have worked as a tea-seller in his childhood has now got a face-lift. The the station is part of the Vadnagar-Modhera-Patan heritage circuit and has been redesigned by Indian Tourism, giving it a heritage look with aesthetic stone carvings.

After the world’s tallest statue of Sardar Vallabhbhai Patel came on the global stage, the Railways have done work of connecting eight important places in the country and today the work of connecting Gandhinagar with Varanasi, the city of Baba Vishwanath will also be completed.
Other railway projects
Other railway projects to be launched by the PM includes a weekly superfast train between Gandhinagar and PM Modi’s constituency Varanasi, a new electrified broad gauge rail line (55-km-long) between Mehsana and Varetha worth Rs 74 crore. It has a total of 10 stations with four newly developed station buildings viz. Visnagar, Vadnagar, Kheralu & Varetha.

The project portfolio also includes the electrification of the Surendranagar–Pipavav section at Rs 289 crore. A Mainline Electric Multiple Unit train service connecting Gandhinagar and Varetha and others.