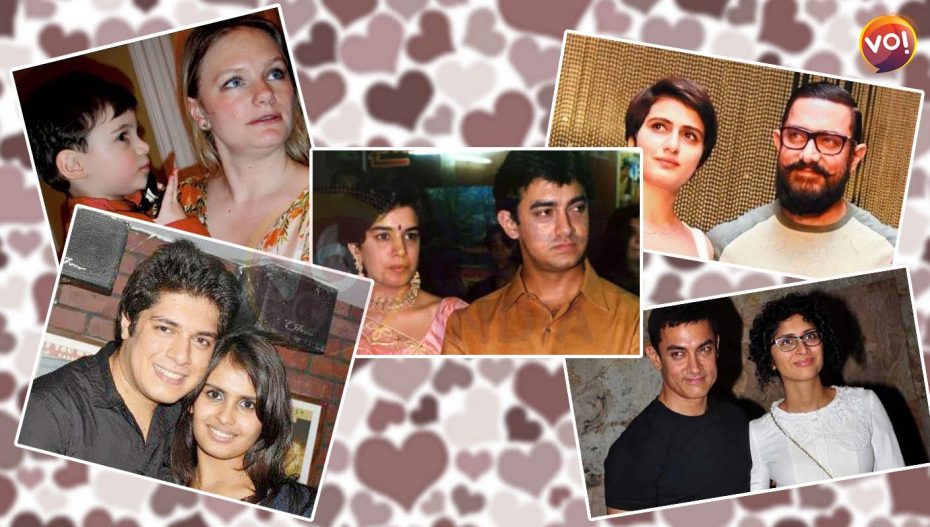 Bollywood actor Aamir Khan, known as Mr Perfectionist of Bollywood has always been known for his perfection when it comes to his films but still seems to be searching for his perfect marriage. He has been in the news not only for his professional life and blockbuster films but also for his personal life. Aamir Khan made his debut as the main actor with the film ‘Qayamat Se Qayamat Tak’ in 1988. Starting from a lover boy image, Aamir Khan successfully graduated to being one of Bollywood’s few versatile actors of Bollywood.

Now that he has ended his 15-year-old marriage with Kiran Rao, Vibes of India takes a look at Aamir’s personal life. What is point worthy is the fact that Aamir has always maintained good, civil, decent relations with his ex-es.

Reena Dutta and Aamir khan married each other on April 18, 1986, two years before his debut in Bollywood. Reena was 18 years old and Aamir was 21 years when they got married. Reena and Aamir were neighbours and Aamir had asked her out many times, but Reena always rejected his proposal. Later, Aamir gave up and then in a very Bollywoodish style, Reena confessed her love for him. Aamir once said that he also wrote a letter to Reena with his blood to impress her when he was in a relationship with her, but Reena had got upset with the incident. They married had two children but the marriage ended after 16 years. They have two children Junaid and Ira, whose custody was won by Reena. At present, his son Junaid, about 28  years old is dating Sonam Verma, who is a student, and Aamir’s daughter Ira is dating fitness trainer Nupur Shikhare.

It must be noted that it was on the set of Lagaan, produced by his then-wife, Reena that he first met Kiran Rao who was an assistant director to Ashutosh Gowariker. In an eerie co-incidence, he is leaving his current wife Kiran because he met Fatima on sets of Dangal where his wife Kiran was one of the co-producer.

Jessica Hines is a well-known British author and journalist, known for her book on Amitabh Bachchan, ‘Looking for the Big B: Bollywood, Bachchan and Me. Rumours had it that Aamir met Jessica on the sets of his 1998 film ‘Ghulam’ and eventually started a live-in relationship with Jessica. Also, there have been no confirmations from Aamir’s end there are rumours that he also has a son with Jessica and they have named him Jaan. Jaan was born in 2003. Jessica told the media, “Jaan’s father is Aamir Khan of Bollywood film industry”. Jessica was 32 when she met Aamir who was 37, then.

Aamir Khan and Kiran Rao first met on the set of the 2001 film Lagaan, where Kiran was assistant director to director Ashutosh Gowariker. After Aamir’s separation and divorce from Reena, he met Kiran again and used to have long talks on calls. Aamir has confessed that it was a phone call where they talked endlessly about life, love and relationships that made him fall in love with Kiran and marry her. Aamir was 40 then and Kiran was 33 years old. Their son Azad Kiran Rao was born in 2011 through a surrogate mother.

Then they fell in love with each other and 40 years old Aamir married 33 years old Kiran in 2005. However, several reports say that they fell in for each other on the sets of the film.  The couple has a son, Azad. The couple has announced their divorce earlier today after 15 years of their marriage. The couple in their statement has said “In these 15 beautiful years together we have shared a lifetime of experiences, joy and laughter, and our relationship has only grown in trust, respect and love. Now we would like to begin a new chapter in our lives – no longer as husband and wife, but as co-parents and family to each other. We began a planned separation some time ago, and now feel comfortable to formalise this arrangement, of living separately yet sharing our lives the way an extended family does”. The statement further read that they would remain devoted parents to their son Azad and will nurture and raise together.

Aamir is being rumoured to be seeing his Dangal co-star Fatima Sana Shaikh. She is from Jammu and Kashmir. Her dad Vipin Sharma is from Jammu and her mother Tabasusum is from Srinagar. Fatima was born in Hyderabad and raised in Mumbai. There has been a buzz that they even dated in 2016 when Dangal was being produced, ironically by Kiran Rao. Bollywood says Kiran dismissed this earlier because Fatima is just a year older than Aamir’s son with Reena.

Aamir and Fatima were seen together, holding hands and Fatima used to always accompany Aamir to several parties and get-togethers, which sparkled the rumours even more. The rumours got intensified when Aamir recommended Fatima for Aditya Chopra’s film Thugs of Hindostan. Notably, Fatima is 27 years younger than Aamir.

Aamir Khan and Kiran Rao announced their divorce earlier today after 15 years of marriage. Mr Perfectionist of Bollywood will next be seen in the film ‘Laal Singh Chadda’ alongside Kareena Kapoor

Like A Proud Father: Shah Rukh On Pathaan Success