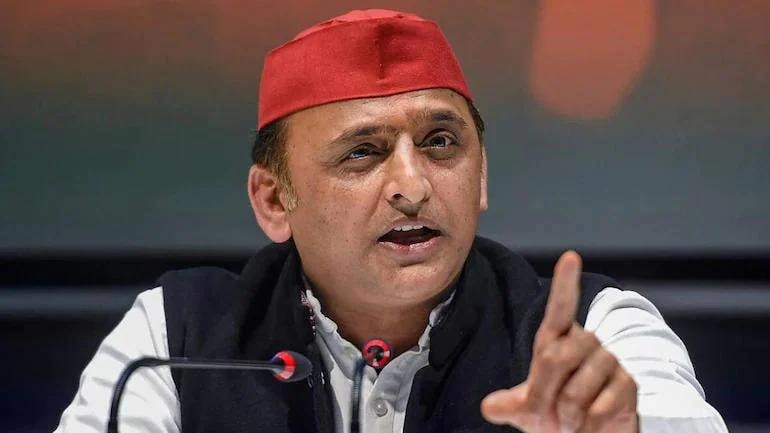 A “potli” (bundle) of grains encased in red cloth in hand, Samajwadi Party (SP) leader Akhilesh Yadav repeated the vows he had first taken in Lucknow on January 17, in the presence of a farmer Tejinder Singh Birk, who was among those wounded in October when an SUV, driven by Ashish Mishra, the son of central minister Ajay Mishra Teni, rammed into a handful of protestors, killing eight, at Lakhimpur Kheri in Avadh. The farmers, who were principally sugarcane cultivators, protested the Centre’s three disputatious laws (that were later scrapped and repealed by Parliament) and the Uttar Pradesh government’s failure to substantially increase the state advisory price for cane and clear the payment backlog owed by the sugar processing mills. Akhilesh Yadav went through the ritual of rerunning his pledges today at a press conference in Muzaffarnagar in the sugar belt of western Uttar Pradesh: irrigation free of cost, 300 units of cost-free electricity, payment within 15 days of crop procurement and creating a revolving fund for farmers through a special allocation earmarked in the yearly budget.

Akhilesh Yadav had Chaudhary Jayant Singh, the president of the Rashtriya Lok Dal, and his ally since 2019, by his side, at the presser which was delayed by over three years. In a string of tweets before departing, Akhilesh Yadav alleged that his copter was not being allowed to take off inexplicably from Delhi to Muzaffarnagar, about 130 kms by road.

The abuse of power is the sign of losers…This day will also be enshrined in the Samajwadi Party’s history! We are taking a historic flight to victory….

“You can ground a helicopter, but not a person’s morale. People understand everything.”

The second tweet depicted Akhilesh Yadav on the tarmac with the copter in the background.

The presser with Jayant was politically significant and called for after the BJP made an overture to the RLD chief to reconsider his ties with the SP and crossing over to its side a couple of days ago. The BJP’s move came in the backdrop of rumours that the RLD was unhappy with the number and kind of  seats it was allocated although the distribution is not yet over.

In a meeting with local Jat leaders and opinion-moulders, Amit Shah, the home minister, who is micro-managing UP and Uttarakhand elections, reportedly invoked the BJP’s version of history and claimed that since the Jats and his party had a “common enemy” in the Mughals for the past “650” years, they shared a deep bonding till date. Interestingly, Shah did not revisit the 2013 Muzaffarnagar communal violence in his speech. The incidents that year scarred western UP and drew a wedge between Muslims and Hindus that resulted in the polarisation of Hindus to the BJP’s side in the 2014, 2017 and 2019 elections. Before the 2017 elections, there were signs that the Jats, who are the dominant community in the western region, were upset with the BJP government at the Centre for not doing enough for cane cultivators. Shah intervened and spoke to the local community representatives and swung opinion and votes to the BJP’s side.

In 2022, the elections are happening against the backdrop of the long-drawn farmers’ protests that were called off only when the laws were taken back. The Jats of western UP, led by the Tikait brothers, Rakesh and Naresh, joined the agitators from Punjab and Haryana and gave the movement a political dimension because of the impending UP elections. The RLD and later the SP clambered on to the bandwagon when it began apparent that the protests impacted farmers in other parts of UP including the small and marginal farmers who demanded a minimum support price or MSP even for commercially grown vegetables and fruits. Other agri issues concerned the uneven spread of irrigation, inaccessibility to markets, a huge increase in the price of inputs and nutrients and a shortage of fertilisers and urea. As 41 seats vote in the first phase of the UP elections on February 10, what are the factors that could determine the outcome?

The strength and persuasiveness of the SP-RLD alliance. When Akhilesh teamed up with Rahul Gandhi in 2017, the catchphrase was “UP ke do ladke” (the two boys of UP). The partnership failed hopelessly; Akhilesh was voted out of power and the Congress reduced to a single digit tally. This time too, the principal  Opposition’s narrative will be about the two boys, but a different set. Akhilesh and Jayant are legatee. Jayant is carrying forth the bequest of Chaudhary Charan Singh, reckoned to be the tallest farmer leader of UP even today. Akhilesh’s father Mulayam Singh Yadav was Charan Singh’s disciple and there was a point at which Charan Singh wanted to anoint Mulayam as his political heir. Today at the Muzaffarnagar presser, Akhilesh Yadav invoked Charan Singh’s legacy and described himself and Jayant as the sons of farmers.

It is clear that farming and farmers make up the leitmotif of the SP-RLD’s campaign because the thrust of Akhilesh’s submissions and statements was the BJP never made good its promises to the agricultural community.

The Jat factor: Will the community vote as farmers or hard-core Hindus as they tended to in the past? As reports and videos surfaced of BJP MLAs being booed and chased out of their constituencies by people, the party resorted to a slew of damage-control measures. Primary among these was appealing to the religious sentiments of Jats and accentuating the Jat-Yadav contradictions that seemed exaggerated.

While there is an element of envy among the Jats, an intermediate caste, towards the Yadavs, a backward caste, because of the Yadavs’ rise and prosperity in the post-Mandal phase, the envy never transformed into antagonism. Caste clashes between Jats and Yadavs were rare, if any. However, in the final analysis, it needs to be seen if the Jats transfer their votes to an SP contestant and if the Yadavs vote an RLD candidate.

Yadavs do not have a significant presence in this part. There is a vast expanse of other backward castes inclined to support the BJP but they are as troubled by bread-and-butter issues this time as the others. In the end it boils down to whether religion takes precedence over economics or economics trumps emotions.

The Dalits are another significant grouping. The dominant Jatavs have always gone with Mayawati who is lying low in these elections.