BJP, Congress Stand with the Rich; I am with the Poor – Kejriwal in Gujarat 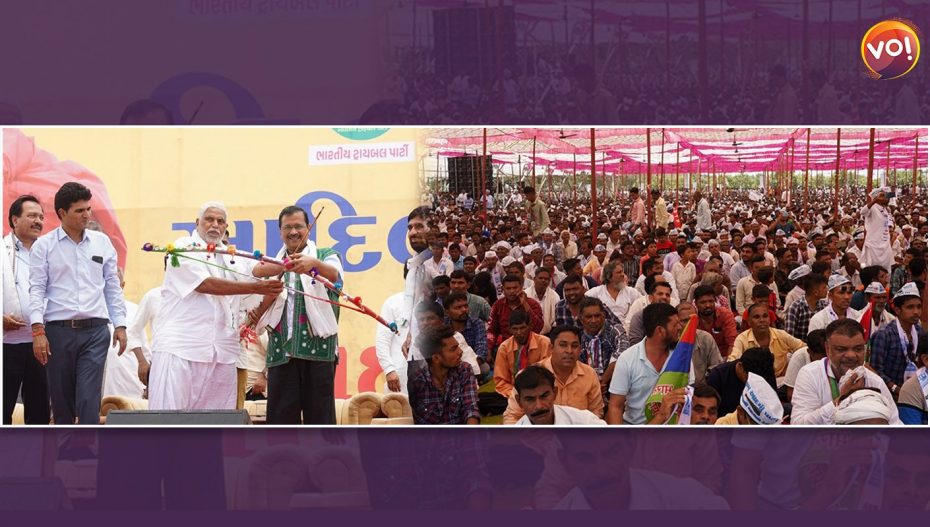 Aam Aadmi Party chief and Delhi Chief Minister Arvind Kejriwal today, while addressing the Adivasi Sankalp Mahasammelan in Chanderia village of Bharuch district, said that the tribal community in Gujarat makes up to about 1 crore of people. As such, the state is home to some of the poorest of tribal communities as well as two of the country’s richest industrialist. Attacking other parties for supporting the rich alone, he said, “On one hand the Bharatiya Janata Party (BJP) and the Congress are standing with the rich and making them richer. But I am here to tell you all that we stand with the poor.”

Speaking about the condition of tribal community in the state, he said, “After winning Punjab, we held the first public meeting in a tribal area. Tribals have been exploited for a long time. They were first exploited by the British and they are being exploited even now… We are a country of common man and not the rich.”

Arvind Kejriwal said that the state’s government had not paid any attention to the education system and that AAP can decidedly change this situation. There are no teachers in schools, no rooms, walls are broken, he said. It was the same in Delhi earlier also, but now the situation has changed. Talking about the condition of government schools in Gujarat, Kejriwal said that many schools in the state have been shut down and that AAP’s governance model has been hugely successful in improving education system in Delhi as well as Punjab. The same can be done in Gujarat as well he said. “There are 6,000 government schools in Gujarat, which have been shut. Many others are in dilapidated conditions. The future of lakhs of children has been disrupted. We can change this future. The way we changed schools in Delhi,” he said.

Furthermore, Kejriwal added, that in Delhi, the kids of the rich and the poor are studying together. “In Delhi, children of judges, officials and rickshaw pullers study sitting on the same bench. I have promised Babasaheb Ambedkar, ‘Baba, Kejriwal will carry out your unfulfilled dreams.’”

Attacking the BJP, the CM of Delhi said that even if they get another 5 years, they will not do anything. He invited Gujarat CM Bhupendra Patel to visit schools and health centers in Delhi and see the difference.

Kejriwal also said that AAP would welcome leaders and members of any party, may it be BJP or Congress, as long as they have the right attitude and a determination to work towards the welfare of the people. He also said that leaders who are unwilling to work for the poeple should stay where they are.

Besides Kejriwal, Bharatiya Tribal Party (BTP) Founder Chhotubhai Vasava also addressed the convention. “Today we are bearing the brunt of BJP’s poor administration. Thus the AAP has come to our support. Support BTP and AAP to make a change and bring in reform in the society.”

Talking about OBC communities, Vasava said, “If our government comes, we will count OBC census. This government gives APL, BPL and identity cards but does not give budget cards.”

Insisting that the current governments must be ousted, Vasava said, “Our welfare will be ensured only when these governments are thrown out of Gujarat. We will survive only when power is in hand. We have to change the history of Gujarat and the country.”