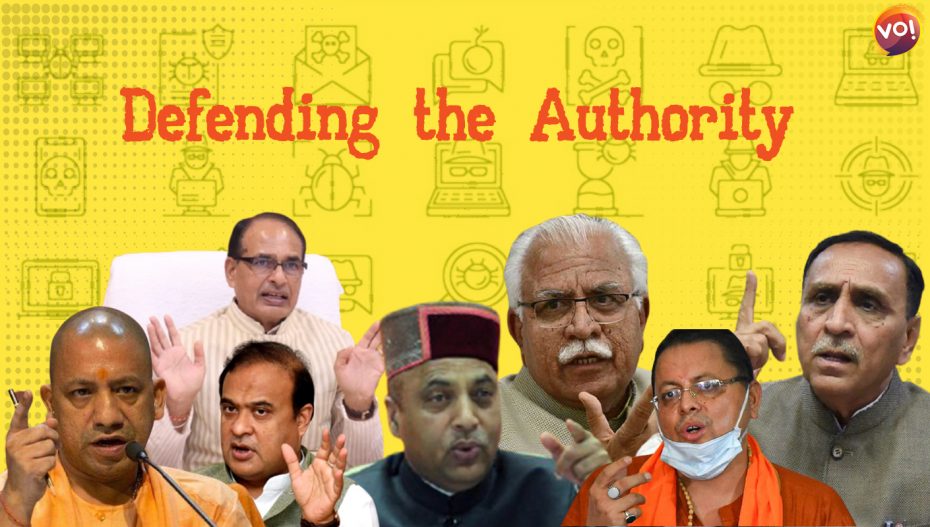 The Bharatiya Janata Party (BJP) on Tuesday fielded its senior leaders across the country including state chief ministers to try and blunt the opposition attack over the Pegasus spyware revelations.

As part of the Pegasus Project, 17 global partners revealed how a leaked list of numbers, which include some who have been targeted with the military-grade spyware, included those of opposition leaders, journalists, rights activists, businesspersons and others. In India, several opposition leaders including Rahul Gandhi were on the leaked potential targets’ list.  Digital forensics conducted by Amnesty International’s Security Lab have confirmed that poll strategist Prashant Kishor’s phone was compromised using the spyware.

BJP chief ministers including Yogi Adityanath (Uttar Pradesh), Manohar Lal Khattar (Haryana), Shivraj Singh Chouhan (MP), Himanta Biswa Sarma (Assam), Vijay Rupani (Gujarat), Jai Ram Thakur (Himachal Pradesh) and Pushkar Singh Dhami (Uttarakhand) were among those who addressed the media to hit back at the Congress and other opposition parties which have slammed the Modi government over the snooping row.

Senior BJP state leaders, including its state presidents and leaders of opposition, also targeted the opposition. However, none of them categorically denied that the Union government had paid the NSO Group and used Pegasus spyware.

Most of the state leaders made wild claims about how these revelations – released globally by a consortium of media organisations who have been investigating the leaked list together – was some sort of “international conspiracy” to “defame India”. The project, however, has unveiled alleged spyware attacks across the world, including on 14 heads of state globally.

“The opposition parties including the Congress are involved in dirty and controversial politics even when the country is in the midst of a pandemic,” said Uttar Pradesh’s Adityanath. “The opposition, knowingly or unknowingly, is falling prey to the international conspiracy.” Adityanath had famously used the “international conspiracy” bogey even when his government and the state police were criticised for their handling of a Dalit teenager’s gang-rape and murder in Hathras.

Assam chief minister Himanta Biswa Sarma too chose a similar line of attack. “The story was broken by certain international media and some news portals in India and they have said that Amnesty International is the partner. We all know the role of Amnesty – they are encouraging all along left-wing terrorism in India and they are working overnight to defame India globally. We know all the credibility of Amnesty,” he claimed.

Gujarat’s Vijay Rupani used another favourite term of the BJP’s, in addition to the international conspiracy line – according to him, the revelations revealed the oppositions “anti-national mindset”. “Congress has enjoyed power for many decades…now (without power) it is gasping for air like a fish out of water…It is making efforts to come back to power at the expense of damaging the reputation of the country at international level but it is not going to succeed…,” he said.

Pushkar Singh Dhami, chief minister of Uttarakhand, too said “anti-national forces” and the Congress were trying to stall development work by bringing up the issue. Why talking about these serious accusations would stall development, though, he did not clarify.

Madhya Pradesh chief minister Shivraj Singh Chouhan chose a different angle – to claim that it is the Congress who regularly spies on people, not the BJP. The BJP had no reason to spy on leaders like Rahul Gandhi, he claimed, because they are “politically zero”.  Himachal Pradesh’s Jai Ram Thakur too pointed to the Congress’s alleged history of phone-tapping, without saying anything about whether or not the Union had used Pegasus.

This article was first published on The Wire