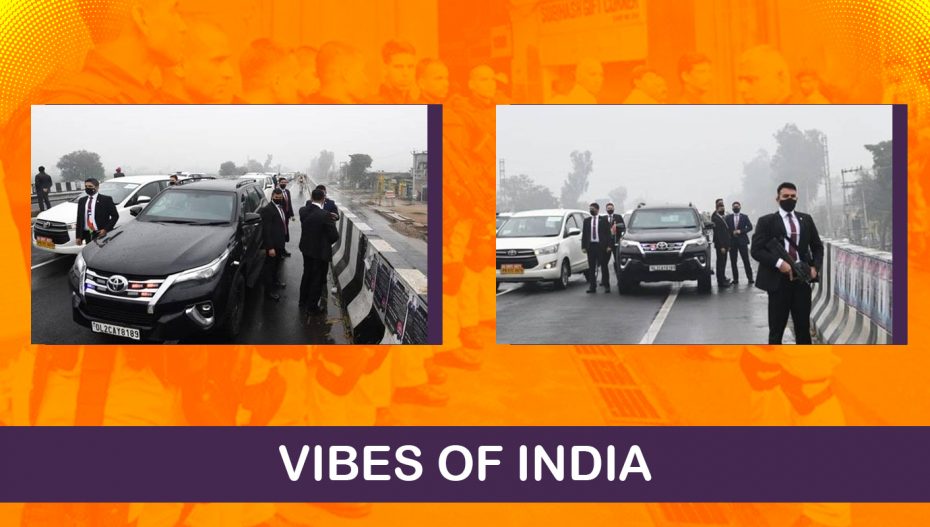 “We asked the PMO to discontinue the visit due to bad weather conditions and protests and had no information of the Prime Minister’s sudden route change.”said Chief Minister Channi.

“A detailed logistical report was made available to the Punjab government well in advance.”MHA

Scheduled to make an appearance at a rally in poll-bound Punjab’s Ferozepur district, the Prime Minister’s cavalcade was stuck on a flyover for 15-20 minutes, Wednesday. The road ahead, was blocked by some protestors.

According to a statement released by the Ministry of Home Affairs, the PM landed in Bathinda Wednesday morning, from where he was to go to National Martyrs Memorial at Hussainiwala by helicopter. Due to rain and poor visibility, the PM waited for about 20 minutes for the weather to clear“When the weather didn’t improve, it was decided that he would visit the National Marytrs Memorial via road, which would take more than two hours. He proceeded to travel by road after necessary confirmation of necessary security arrangements by the DGP Punjab Police. Around 30 km away from National Martyrs Memorial in Hussainiwala, when the PM’s convoy reached a flyover, it was found that the road was blocked by some protestors. The PM was stuck on a flyover for 15-20 minutes. This was a major lapse in the security of PM,” the statement read.

It added that after this security lapse, it was decided the PM would head back to Bathinda airport. However, defending his government, Punjab CM Channi said: “It was just an agitation. There was a peaceful protest on the way. It would be wrong to say that there was a security lapse. We asked the PMO to discontinue the visit due to bad weather conditions and protests and had no information of the Prime Minister’s sudden route change.”Now, the MHA has sought a report from the Punjab government on the matter.

BJP National President J. P. Nadda in a series of tweets accused the Punjab Government of compromising the security of the Prime Minister. Union Minister of Textile Smriti Irani, convened a press conference in Delhi accusing the state government for the lapse.

“This is proof of complete failure of law and order in Punjab. When you cannot assure a safe passage to the PM and that too just 10 km away from the Pakistan border, you have no right to stay in office” said Cpt Amarinder Singh, former chief minister, Punjab.