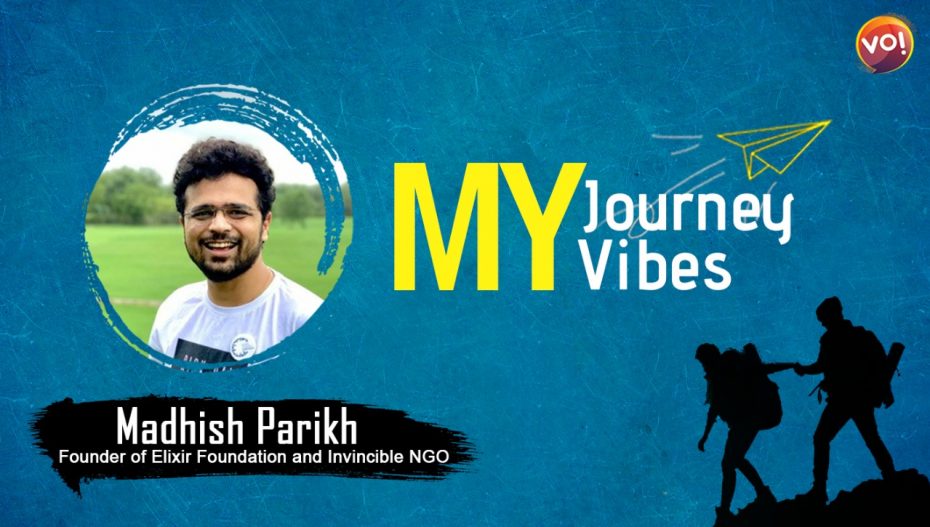 He’s the founder of Elixir Foundation and Invincible NGO and has been actively involved in community services for a decade now. But though Madhish Parikh has seen a lot of distress and poverty, there are still times when a situation disturbs him acutely. “I remember an incident in Kathwada village on the outskirts of Ahmedabad, where we saw a pregnant woman boiling water with salt and chili powder -that was the only meal she could afford,” explains Parikh. “When we saw this, my team and I felt very helpless.”

In Vibes of India’s exclusive segment, ‘My Journey, My Vibes’ Parikh emphasizes safeguarding one’s mental health when working in community service. “When I met this pregnant woman during the pandemic, I almost broke into tears. People on the outskirts of Ahmedabad received no aid. You must be emotionally strong to realise that we don’t live in a utopian world. I had to consciously work on my mental health.”

Parikh founded Elixir in 2015 to enable youth to work at the forefront of community service. They have over 10,000 members across India. Parikh and his team raised over Rs 70 lakh for Covid relief, distributed over 10,000 ration kits, served 5 lakh meals, and distributed as many as 2,000 face shields, 10,000 PPE kits, gloves and masks to frontline workers. Apart from that, he arranged training programmes with UNICEF Gujarat for around 100 volunteers and helped at least 100 labourers to reach their homes.

Parikh is an Amdavadi, born to a family of businessmen. His father is into the gold and silver business and it was expected that he would join the family business. “I was mocked when I shared my desire to work on community issues,” says Parikh, adding, “But after I did my computer engineering, I was sure that I was not made to fix machine-level problems but fix the errors in society.”

He adds, “The importance of community service was instilled within me right from childhood because my family has always been involved in giving it back to society. However, my first real experience as a volunteer was when my college professor introduced me to the National Service Scheme, a youth organization led by the Ministry of Youth Affairs and Sports. As a part of this, my first task was to conduct a blood donation camp and I did my best to make this event a success. The camp collected 692 units of blood, which was the highest in the state of Gujarat that year. This enabled me to understand the impact that I was capable of creating.”

Parikh has been given the ‘Gujarat State NSS Award’ by the state government for his community welfare services. He was also honoured with the ‘Indira Gandhi Award’ by the President of India, Pranab Mukherjee, on November 19, 2014, at Rashtrapati Bhawan, New Delhi. He was also selected as a delegate to Bahrain in December 2015, where he worked on Indo-Bahraini relations. He has been a delegate to ‘Women Higher Education for Disarmament and Peace, Vienna Forum’ at the UN in Vienna, Austria.

Parikh has been emphasising the lack of public policy for youth in Gujarat since 2013. He said, “Gujarat was at the forefront of Navnirman Andolan, but today the youth doesn’t even know who the state youth minister or national youth minister is. How will they ask the right questions if they don’t even know the basics?  Gujarat doesn’t have a public policy for youth and that’s a major drawback. Youth policies are a way to channelise the youth into active politics.”

Parikh also believes in due publicity for his work so that it will attract others to do the same. He says, “There are people who take social service as a fashion and only want to upload their pictures on Facebook; but I believe that if the genuine work of community service is promoted on social media it will inspire other young people.”