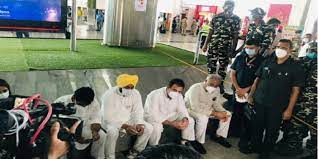 However, the Congress leader arrived today at Lucknow airport only to be directed the way in which he can proceed. Incensed about curtailing his freedom of movement, Rahul Gandhi retorted sarcastically saying “ “What kind of permission I have been granted by UP Govt? These people are not letting me go out of the airport.”

Rahul Gandhi sat in a dharna along with Punjab chief minister Charanjit Singh Channi and Chhattisgarh chief minister Bhupesh Baghel. “This is what UP government’s permission looks like. Show them on your camera,” Rahul Gandhi said while trying to get past the security personnel unsuccessfully. “We want to go in our car but they want to take us in their vehicle. they want to take me like a prisoner.” Rahul said

Though the Uttar Pradesh Police initially insisted that the Congress delegation will have to travel accompanied by the UP Police only, they ultimately relented and allowed Rahul Gandhi to travel in his own vehicle after much drama at Lucknow airport.

“For some time now, the farmers are being attacked by the government. Farmers are being mowed down by a jeep, they are being murdered, the name of a BJP home minister and his son is coming up, but no action is being taken. The farmers of the country are being systematically attacked. The first attack was to reverse the land acquisition bill, the second was bringing the three farm bills and today systematically what rightfully belongs to farmers is being snatched away,” Rahul Gandhi said earlier on Wednesday.