Devendra Fadnavis Retains Same Stature Within BJP As Before? 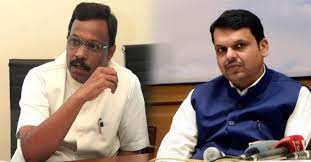 Former Chief Minister of Maharashtra, Devendra Fadnavis has reasons to be worried. The winds within his own party seem to be blowing in a different direction. If the indications dropped by the BJP High Command is anything to go by, the plan to provide him more time listening Hindi version of Sinhalese Mahi ke song sung by his wife Amruta in private audience is being prepared enthusiastically.

BJP has chosen to reinstate two leaders who Fadnavis did nothing to hide his dislike for, when he was the blue-eyed boy of the BJP Top brass during successful five years as Chief Minister. First, Vinod Tawde was promoted as BJP general secretary from the position of national secretary and then, Chandrashekhar Bawankule was nominated for the Maharashtra Legislative Council polls.

There are reasons enough to deduce that the poster boy of good governance in Maharashtra is out of favour of the central leadership. While it is being insisted in the party circles that nobody questions Fadnavis’ integrity and ability, his inability to overcome the Tawde and Bawankule issue, has cost BJP at least six seats in the Vidarbha region. Side lining the two leaders is seen as a reason which antagonised OBCs and Maratha community

Party seems therefore in amendment mode even at the cost of Devendra Fadnavis who was previously projected as a savvy leader who could be elevated to the national stage. A protégé of Gadkari, Bawankule’s elevation will strengthen the hands of Gadkari at the expense of Fadnavis. Fadnavis’ relative failure in the election in Bihar last year also contributed to his position being weakened in the party.

Brought in as Maharashtra BJP president in April 2013 for the purpose of unifying force between two rival factions led by Nitin Gadkari and Gopinath Munde, Fadnavis is Blamed today by his critics for the break up of the 25-year-old alliance with Shiv Sena. He is equally criticised for more factionalism in the party citing examples of his open battle with late Gopinath Munde’s daughter Pankaja. It was in a function in the memory of Gopinath Munde where party president J P Nadda extolled the virtue of the dead leader that people first noticed the commencement of downsizing of Fadnavis.