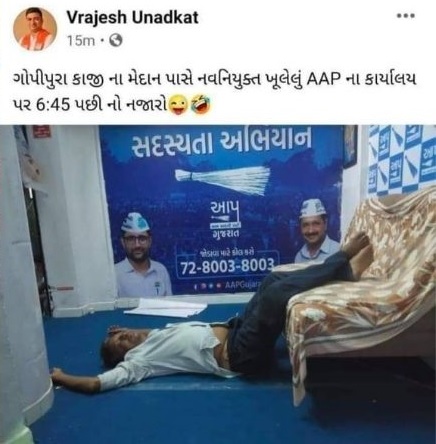 In dry State Gujarat, where alcohol consumption is a crime liable for prison, the Aam Aadmi Party and BJP is entangled in a dirty politics over booze.

BJP Municipal councilor of Surat Vrajesh Unadkat posted a photograph on social media, that soon went viral in Gujarat. It shows an AAP worker sleeping weirdly in AAP’s Gopipura office in Surat. Turns out, that the drunk man, Himanshu Arvind Mehta was a BJP worker and not from AAP. Even the man behind the lens, Jayraj Ramchandra Sahukar is a BJP worker. As soon as the tables turned, BJP Corporator Unadkat changed his statement and claimed that while the lensman Jayraj Ramchandra Sahukar is from BJP, the party has no connections with the drunk man, Himanshu Arvind Mehta. BJP claimed that Himanshu Arvind Mehta was fond of politics and was a regular at all rallies but he was not a primary member of the BJP but AAP.

As per Prashant Barot who wrote a written apology, “We are all friends, irrespective of our choice of a political party. The photograph was clicked for fun; unfortunately, it went viral.”

Threatened to write an apology letter

BJP Corporator Vrajesh Unadkat says that Jayraj Ramchandra Sahukar, the photographer of the pic that went viral is a BJP worker. However, Himanshu Arvind Mehta participates in BJP rallies during election campaigns but is a full-time worker of AAP.