Ahmedabad: Is It A Bird? Is It A Plane? No It’s Monitoring By Drone This Uttarayan 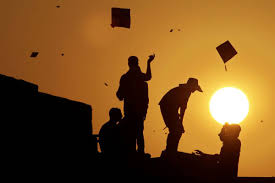 The city of Ahmedabad has been witnessing a steady increase in cases of coronavirus for some time now.  The police system has been in action mode due to the increasing number of cases.  For Uttarayan, a notice was issued by the city police commissioner banning kite flying or flying on the roads, along with instructions not to use Chinese thread.  People are instructed to not assemble too many people on the terrace in order to prevent further transmission of the virus in larger numbers.

The city will be monitored by drones on the day of Uttarayan by the police.  Last year also on the day of Uttarayan, drones were used for monitoring in various parts of the city where large numbers of people gather on the terrace.  The police had acted against those who were found in breach of protocols.  Similarly, 50 drones will be used to monitor the city this year.

Due to the surge in covid in Ahmedabad, the virus is spreading among people once again and in Uttarayan it may lead to further transmission. The police have earmarked at about 250 places, as checkpoints, including tall buildings and towers in various parts of Ahmedabad, and will also monitor them through binoculars.