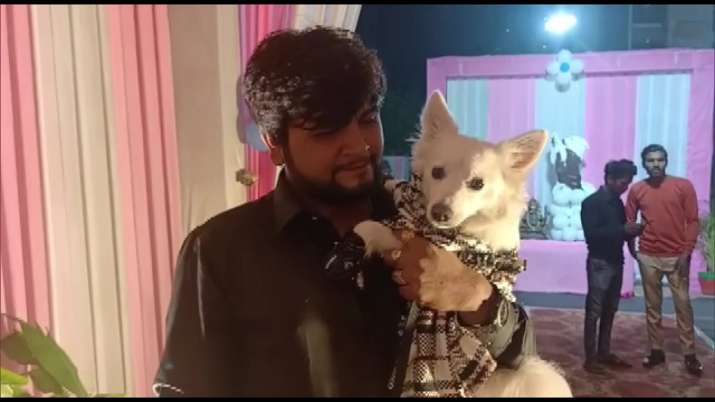 Abby meant the world to Chirag Patel of Ahmedabad . His two-year-old Pomrerarian was his life, his sweetheart, his everything. So his friends and relatives were not surprised when Chirag also known as Dago threw a lavish party on Abby’s second birthday.

He not only threw a party and booked a posh party plot in the Nikol area of the city, but he also booked a very popular singer Kajal Mehariya to perform at the event. An event manager was also hired. “White” money spent on Abby’s birthday party crossed Rs seven lacs but that was what Chirag wanted.

He was very pleased to see the arrangements at the Madhuvan Green Party plot. It was Abby all the way. A special stage with a special cake was also arranged for Abby’s cake cutting ceremony.

However, one mistake that Chirag the dog owner made was that he forgot to inform the local police. In the #covidera, it is mandatory to inform the police before a gathering.

Chirag knew that he could not invite more than 400 people as per the Gujarat government law for any function which is held in an open air area. The limit to call people in a close area is 50% of the hall’s capacity. So Chirag was not breaking rules. He had not flaunted Covid guidelines, he had invited less than 400 people.But under the disaster management act, he violated a rule of not informing the cops.

Kajal Maheria is a popular Gujarati singer.  This Mehsana based singer whose numbers from Dago, Bewafa, Jaanu ni yaad avshe, mane tu shu samje chhe and others have over 1.4 million followers on her Facebook.

Chirag is a 24-year-old hard-working man who runs a paan shop at Bapa Sitaram Chowk. Paan and masalas are very popular in Gujarat but require hard work.

The party began at around 6 pm and by 8 pm, Kajal Maheriya had made the party-goers crazy. She spent about 20 minutes only at the Party, local police inspector V D Jhala told Vibes of  India. The police however got information from its D staff and they raided the party around 9.45 pm on Saturday night.

Saturday night fever for Gujjus means garba. Most Western parties in Gujarat or among Gujaratis anywhere in the world from Toronto to  New York or Sydney to London end with garba. Sanedo Sandeo originally sung by late folk artist Maniraj Barot is a popular song to end a Gujarati party.

In Abby’s party, he was being looked after and fed well while Chirag’s friends and relatives danced to the DJ’s tunes. The DJ party had converted into a garba frenzy and people were dancing their hearts out and also their masks out.

The police arrested Chirag Patel, Urvish Patel and Divyesh Maheriya under Indian Penal Code 181 and 188 for posing danger and violating the disaster management guidelines. The three have now been released on bail, PI Jhala said.

“Whatever happened is okay. It was my mistake but at least I could Abby a time of her life”, Chirag said.