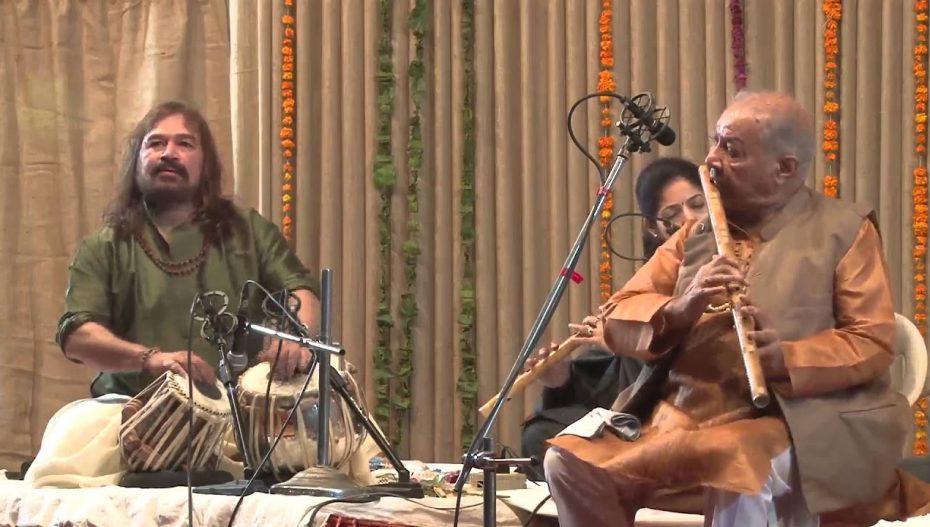 At the age of 84, Hari Prasad Chaurasia appears unsteady and frail, but that impression quickly dissipates when he begins playing. The doyen of Indian classical music created magic on the fifth day on the Saptak Music Festival on Wednesday, with his hour-long performance of Rag Maru Bihag.

For a while, it seemed the unseasonal rain might disrupt the concert. The shamiana constructed at LD Arts College couldn’t quite withstand the drizzle, sending a section of the audience scurrying for cover. Pandit Chaurasia played on regardless, eyes closed, and the audience soon settled in to enjoy the magic he creates with the flute.

Pandit Chaurasia began his performance on a cheerfully defiant note, saying: “I never thought I’d see the day when everyone has to go around with their face covered like this. But I’m not going to cover my face, I’m going to make music for you.” The maestro was ably accompanied by Ramkumar Mishra on the Tabla and three talented youngsters on the flute, providing back up.

Pandit Chaurasia’s performance was preceded by Rattan Mohan Sharma with Ramkumar Mishra on the Tabla, Hemant Bhatt on the Pakhwaj and Nilay Salvi on the Harmonium. Sharma, who is a disciple of the late Pandit Jasraj (who passed away in August 2020 and who this Saptak Festival is dedicated to) started with a rendition soulful rendition of Raga Puriya, followed by some Haveli Sangeet.

Speaking on the occasion, sitarist Manjuben Mehta, wife of Pandit Nandan Mehta, founder of the Saptak Music School, recalled how her husband would regularly accompany Pandit Jasraj on the Tabla when he played in Sanand. “Out friendship goes back 50 years. We want to move Jasrajji’s gharana legacy forward through his students,” she said.

The first performance of the evening was by Ahmedabad’s very own sitarist Amita Dalal, who has long been a student of Manjuben Mehta. Resplendent in a white and gold ankle-length gown, Ms Dalal performed a Bandish of Rag Kauns and Rag Tilak Kamod. She was accompanied on the Tabla by Sapan Anjaria, another Ahmedabadi and Saptak regular.