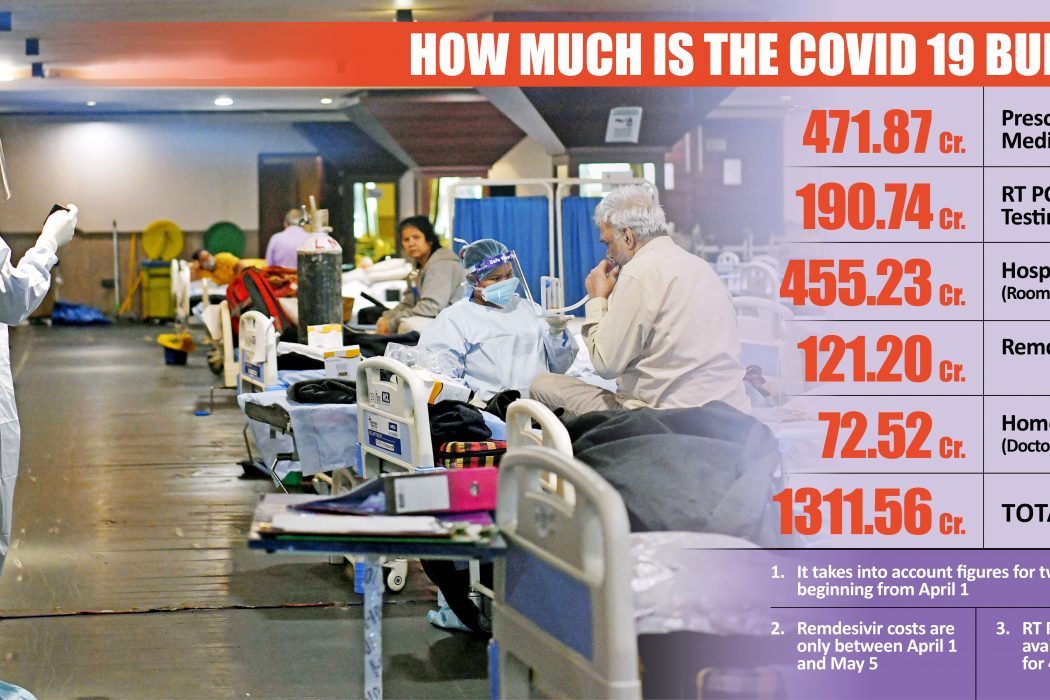 The bigger, wider, and scarier second Covid wave has devastated families in Gujarat. On one hand, it was hard to find health facilities on the other hand little intervention resulted in an increased financial burden on the people. Vibes of India has tried to capture the monetary burden on the people of Gujarat. The calculation does not include the burden of laboratory tests, CT scans, and other supplements. Even packages fixed by the civic administration excluded such charges. Of the total burden of Rs1,311.56 crore, two-thirds or Rs927.1 crore was spent on hospital or prescribed medicine bills.

Our calculations are based on the most conservative costs and thus it would be at least 50 percent lower than the total costs, especially for patients under home care and treated at private hospitals.

Between April 1 and May 4, Gujarat’s health infrastructure collapsed as the number of new patients increased 12 times in a matter of days. Official data from the health and family welfare department show the number of active cases in Gujarat increased from 12,996 on April 1 to 1,48,297 on May 4. All health-related services become hard to access. Getting an RT PCR test and results done would take at least 24 hours, serious patients had to wait for 24 hours to get an ambulance, most hospital beds were full and even supply of oxygen was not sufficient.

“Managing everything — medicines, hospital beds, Remdesivir – was mentally stressful. My parents were in the hospital, my daughters were treated at home and I had just recovered from Covid. The psychological trauma cannot be explained in words,” says a resident of Bopal, on condition of anonymity.

The sudden surge in cases resulted in the tremendous burden of getting treatment for the public. For example, in the 45 days for which data is available (April 1 to 23 and May 1 to 22), a total of 14,67,439 RT PCR tests was conducted across Gujarat, an affidavit submitted by the state before Gujarat High Court reveals. Assuming all tests were conducted at the lab premises (and no sample collection at home was done), the total burden of these tests stands at Rs190.74 crore.

Not all were lucky enough to get hospital beds. Some had to be treated at home. “Not all patients in the second wave required hospitalization. You cannot average out, but 30 percent of moderately affected patients would have needed home care treatment. Few of them, who was mildly infected could have recovered in just three or four days,” says Dr. Bharat Gadhavi, president of Ahmedabad Hospitals and Nursing Home Association.

However, getting home care treatment was also not easy or cheap. Depending on the place or city you were living doctors charged the consultation fees. “My parents aged was found to be Covid positive. A leading doctor in my area refused to come for home treatment. I had to request one of my friends to convince the doctor,” says Kumar Kagathara, a corporate executive working with multinational.

The charge for home treatment varied from doctor to doctor. A Covid center in Rajkot charged Rs40,000, which included six visits to the patient and medicines. One of the doctors in the Satellite area of Ahmedabad would charge Rs.10,000 for a 14-day consulting package,  not including medicines. In the peak of the second wave, some Ahmedabad doctors charged as high as Rs25,000 for a 14-day package that would not include medicines or any tests.

All Indian Origin Chemists & Distributors (AIOCD) collects data on sales of prescription drugs across the country. The data reveals, since March 2020, when the first few cases of Covid19 infections surfaced, total spend on drugs used for treating infections, respiratory disorders, and vitamins surged to Rs1,875 crore. During the second wave, sales for these three drug categories surged to Rs471.87 core – one-fourth of the total in just three months.

“Anti-infectives have seen the highest surge in demand followed by Cardiac, Nutritional and Respiratory segment. All the drugs that have picked up have some role to play in the treatment of Covid – either direct – for treatment purposes or indirect. for boosting the immunity of individuals,” says Sheetal Sapale, president marketing, AIOCD AWACS.

The biggest burden on households due to the second wave was hospitalization and home care treatment. The data for both is not available or measurable. Thus, we have relied on certain assumptions after talking to doctors, medical experts, hospital management, and patients.

The first assumption is that not all would have required hospitalization. We have also assumed that none of the patients that would have been hospitalized would have need critical treatment – ICU or oxygen beds. This is not correct as there was a huge shortage of beds, especially ICU and oxygen beds. But our assumption of no critical care requirement averages out the overall costs of hospitalization. We have also assumed that all treatments (including medicines) in government-owned or managed hospitals were completely free.

In the second wave, municipal corporations had fixed the price at Rs11,300 per day for a normal bed. Assuming a patient was needed to be kept under medical observation on a normal bed for ten days, he would have incurred expenses of Rs1,13,000 for treatment. The two-month daily average (April and May) of patients under treatment comes to 80.573, assuming only 50 percent (or 40,286 patients) of these were in hospitals for 10 days, the total burden of hospitalization comes to Rs455.23 crore.

It is worth mentioning that charges for ICU without a ventilator were capped at Rs16,200 and for that of with ventilator was at Rs19,600 per day. Even all these charges excluded visits from a critical care specialist, pathology lab tests, and medicines as basic as Favipiravir, high-end antibiotics. Should be noted that all patients – in-home care or at hospitals – were prescribed CRP and D-Dimer tests every third day by doctors. Assuming only 20 percent of hospitalized patients (8057 people), would have needed ICU with a ventilator, the hospitalization burden would further increase by Rs.66.87 crore.

Moreover, assuming only 30 percent (or 24,172 patients) of the people needed homecare and Rs30,000 would be the cost of treatment (including medicines, doctor visit,s and pathology reports), the total burden comes to Rs72.52 crore.