Is BJP-Sena going to remarry in Maharashtra? 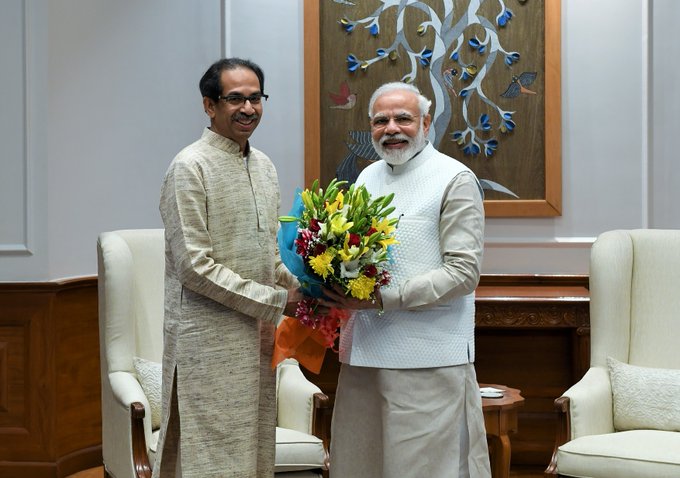 Name it, ‘reunion’ or ‘reconciliation’ but the BJP and Shiv Sena are onto something, especially after Uddhav Thackeray met Prime Minister Modi in Delhi, in what political leaders define as an extempore.

As we wait for details to emerge from the roughly 45-minute-long meeting, lets assume for now it was ‘peace talk’ on the table. Maharashtra CM Uddhav Thackeray led a delegation to PM’s office to discuss reservation – job and college seats – for the Marathas, an upper caste powerful community in Maharashtra. Following, PM Modi met the CM separately. This meeting, said a political leader, would have served as a chance for Uddhav Thackeray to put forth his reasons and circumstances that led him to break his 30-years alliance with the BJP, in November 2019.

Interestingly so, Sena MP Sanjay Raut, a fierce critic of the BJP was heard describing PM Modi as a ‘top leader of the country’. Consequently, following the Delhi’s closed-door meet, all members of the Mahrashtra Vikas Aghadi (MVA) – The Sena, Congress and NCP – have also discounted any threat to their government, as a result of the meeting.

Then came another news over the weekend that a Sena MLA Pratak Sarnaik in his letter to Uddhav Thackeray, requested for a reunion with the BJP. He also mentioned that despite a fall out, the leaders are good relations and ‘such relations should be used’ for the benefit of all. However, the MLA is undergoing investigations for a money-laundering case. With the reunion, Sarnaik believes that the investigation agencies will back off – as currently investigations are being carried out on BJP’s instructions to harass political opponents.

In November 2019, when Uddhav Thackeray swapped allies – BJP for Congress and NCP – Sharad Pawar’s party – he made a statement that the BJP was overpowering their existence and demanding a larger role in the Maharashtra government. But election results showed BJP as the winner with Sena only a runners-up. Uddhav Thackeray then formed a new coalition – the MAha Vikas Agadi (MVA) and flagged off his tenure as Chief Minister, for the first time ever.

But the leader who spoke to me said, that the Sena was unhappy with the current arrangements. He also added that apart from an occasional friction, the alliance is working well, with Uddhav Thackeray having a free hand in decision-making.

But the fact that a section of the Sena wishes to mend their ties with the BJP cannot be ignored. Primary reason – lack of bond between Sena and Congress, even after governing the state for two straight years. Uddhav Thackeray too finds solace with Sharad Pawar of NCP, who is reportedly playing a double role that of a mediator and a smart strategist when it comes to smoothening differences that come within the tripartie alliance.

Another leader quickly pointed to me that the Uddhav Thackeray in his annual addressal speech to the Sena’s Foundation Day, refrained from directly targeting the Mod-led government or the BJP. This comes as a surprise as only three days ago, Sena and BJP workers had a physical clash over an editorial published in the Sena mouthpiece – Saamna – on alleged shady land deals in Ayodhya by the Ram Mandir Trust.

However, in his speech Uddhav Thackeray targeted comments passed by the Maharashtra Congress chief, and affirmed that his party is keener to go solo in the future elections. Without naming anyone Uddhav Thackeray said, “If we do not offer solutions to people’s problems, but only talk about doing it alone in politics, people will beat us with chappals.” A significant ‘silence’ was thus observed against BJP in Uddhav Thackeray’s speech.

If at all there is a reunion between BJP-Sena, the obvious question then is who gets the Chief Ministership – as Uddhav Thackeray will not surrender and BJP wants this seat for his man. Don’t forget the unsolved friction between Devendra Fadnavis and Uddhav Thackeray, as the latter had replaced him. One of the primary reasons behind Sena-BJP break was rising political competition between the two.

Ever since his dramatic removal in 2019, Devendra Fadnavis has made several unsuccessful attempts to overthrow Uddhav Thackeray and recapture the chair, which according to him was wrongly usurped from him. This has only worsened the ties.

If at all a reunion is underway, BJP should insist on reclaiming the CM chair (an unlikely demand that Sena would agree upon), and Devendra Fadnavis should be provided a prominent role in the Centre, thereby paving a peaceful pathway for Sena-BJP parties.

The leader added, Uddhav stays on as CM but with two BJP deputies namely, Sudhir Mungantiwar, an OBC leader from Vidarbha, and Ashish Shelar, a Maratha leader from Mumbai. A speculation but these names are surely doing the rounds.

But the three political leaders I spoke to, said nothing is going to change in the immediate future. Like everywhere else, political parties in Maharashtra too are reading the ripples of the post-pandemic political water.

Come February 2022 and matters could come to a closure prior to Mumbai’s powerful and cash-rich municipal corporation elections, opine political leaders. One of them added, both BJP and Sena require clarity if there is a homecoming and if one of them is ‘going all out’ against the other or NOT AT ALL. Clarity may come sooner. He said, “Let’s keep a close eye on July.”