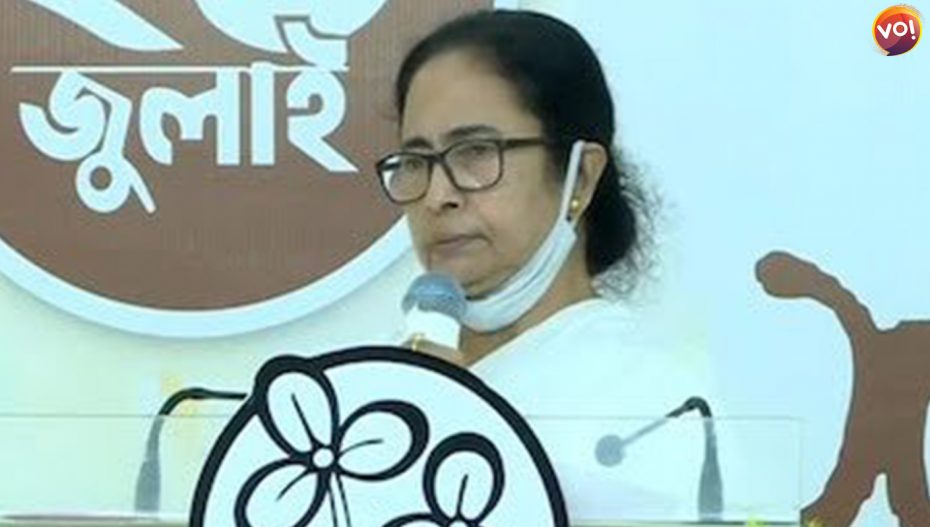 Buoyed by her an emphatic victory in the West Bengal elections where she humbled the combined might of Prime Minister Narendra Modi and Home Minister Amit Shah, a triumphant Mamata Banerjee on Wednesday announced that it is time for a Bengal model in the country, not Gujarat.

‘‘I have arrived’’ — she seemed to convey through giant screens set up in various states, as the TMC supremo for the first time broadcast her Shahid Divas speech outside West Bengal and across the country. It is clear a spirited Mamata, all set to take the battle bang into the opponents’ territory.

The giant screens were put up in Tripura, Assam, Odisha, Bihar, Punjab, Uttar Pradesh and Delhi on the occasion of Martyrs Day. Her posters in Gujarati were put up at various places in Ahmedabad city too, which were later removed. It was not clear immediately if the authorities got them removed or the TMC decided so.

Speaking in Bengali, Banerjee asserted that it was time for a Bengal model across the country and not Gujarat, as she took at a dig at the Centre over the Pegasus snooping row. In a stinging satire, Mamata said she could not talk to opposition leaders as she knew her phone was being tapped.

“Three things make democracy — media, judiciary and the election Commission — and Pegasus has captured all three,” she said. “In the name of Pegasus, they are intruding into our lives. I have covered my phone in plastic, the government should also be plastered,” she asserted.

TMC MP and Mamata Banerjee’s nephew Abhishek Banerjee paid tributes to those who were killed on July 21 in 1993. “The painful memories of July 21, 1993, are still fresh in our minds. We can never forget the gross atrocities meted out to the 13 innocent souls by the erstwhile government. I pay my solemn tribute on Shahid Dibas to the heroes for their supreme sacrifice. Jai Hind! Jai Bangla!” he said in a tweet. Mamata also paid tributes to the ‘martyrs’ and urged people to join her in honouring the brave souls. TMC national general secretary had avoided the questions on whether the TMC supremo will emerge as the prime ministerial candidate for the 2024 Lok Sabha Elections.

Abhishek had announced that within one month TMC will chalk out a strategy of expanding its foothold and how it intends to go ahead with its expansion plan.

Former TMC minister Madan Mitra had on Tuesday announced that the Trinamool Congress would make its formal entry into national politics on Wednesday.

He exuded confidence that there would be a Mamata Banerjee-led government in Delhi in 2024. Hitting out at the BJP, Mitra said Uttar Pradesh is a deciding factor in the 2024 general elections and BJP is going to lose the state polls there, next year.