Modi In Traffic Jam, And Decaying Of Our Democracy 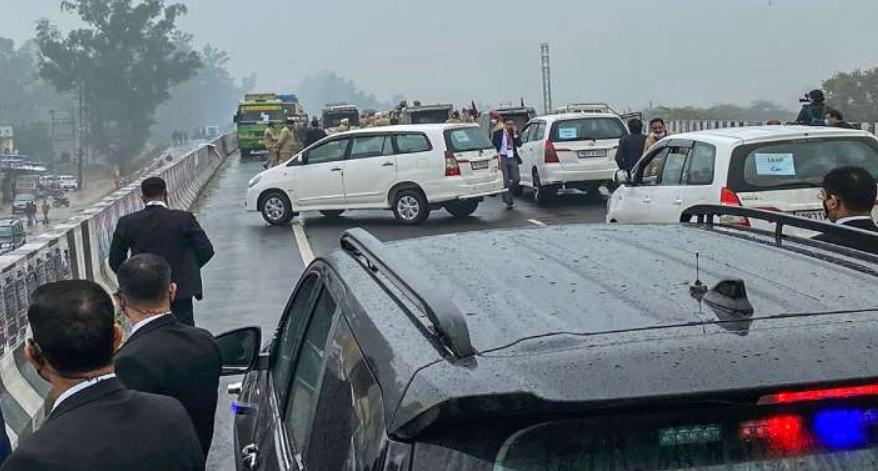 Today the nation feels threatened, our collective security and democracy compromised – or so the media would have you believe, with the prime minister’s cavalcade having to turn back due to protests and the allegations of ‘poor security management’ it has given rise to. But in reality, this incident reveals to us the many facets of a decaying Indian democracy.

1. Delegitimisation of protest, disagreement and dissent

The shock and furore regarding the protest being able to affect the prime minister’s route exposes our diminishing democratic sensibilities. In a democracy, our leaders are supposed to be responsible and accountable to us – and in most other democracies, that includes the leader at the helm, be it the prime minister or president.

However, there has been a normalisation of our prime minister’s inaccessibility. His reaction to being affected very slightly by as mass scale a movement as the farmers’ protest is reflection of how the prime minister, with all his pomp and paraphernalia, has become insulated from the man on the street and has no genuine interest and faith in his critics’ point of view. He sees no need to include them in the political discourse.

2. Reduction to a security state

The alarm that the event raised – even though there was no attack, no specific threat and no breach of the prime minister’s cordon – stands in stark contrast to how other head of states have, at their most insecure moments as well, much less security. The prime minister melodramatically latching on to this as a life-threatening incident reveals an insecure leader who doesn’t trust his own people, and gets scared by any modicum of access.

When a leader only feels secure behind the guns and batons of policemen, the process of reduction to a security state seems complete. The narrative in the media also dominantly engages with the event from the lens of a security lapse. The discourse in such a security state is driven by an endless insecurity, an obsession with control, a disregard for democratic dissent and elimination of nuances of public issues in favour of a singular focus on the security narrative.

Of course, unauthorised access can create a security problem but the Modi government has tended to take a far more benign view of such breaches in the past. (Instance 1; Instance 2).

3. A servile media that has reduced itself into the regime’s hound dog

The media left no stone unturned to frame the issue as a security lapse, thereby buying into the Union government’s narrative lock, stock and barrel, without examining the state’s rebuttal and without asking the Union about its own role in the alleged lapse. This fits in with the pattern of a significant section of the media having lost all sense of fairness, an extreme bias in favour of the ruling regime, poor fidelity to the facts and truth, and breeding a perpetual sense of insecurity amongst Indians.

4. The disregard and weakening of states

In this incident, the state has not been allowed to put out its side of the story. Blanket trust has been laid in the Union’s version, despite it being contested by the Punjab chief minister. This reflects a pattern of the media, courts and society looking at all Union vs state debates uncritically, assuming the truth must always come from the Union. The Union government engages in blatant hostility (like the outright blame game seen today by the Ministry of Home Affairs) with states governed by rival parties, and the media apparatus and the judiciary largely sides with the Union.

5. Cult of personality subsumes everything else

All the above vices are in no small part a result of the cult of personality that has been carefully created around our prime minister. We have been bombarded with stories of the man’s perfections, his selflessness, his efficiency, his incessant achievements.

The shrinking of our democratic dissent spaces, the thoughtless absorption of ‘security scares’ and the resultant solution of a security state, the creation of a servile media which has either been subdued through threat or lured and coopted, the disregard and weakening of states in favour of the Union are a direct result of the cult of personality that grips us.

For all these reasons it was not our “strong prime minister” who was threatened, as much as our threatened democracy revealed in all its vulnerability in our reaction to the event.

This article is written by Praneet Pathak (student of marketing at IMT and a keen observer of Indian democracy) and was first published by The Wire.