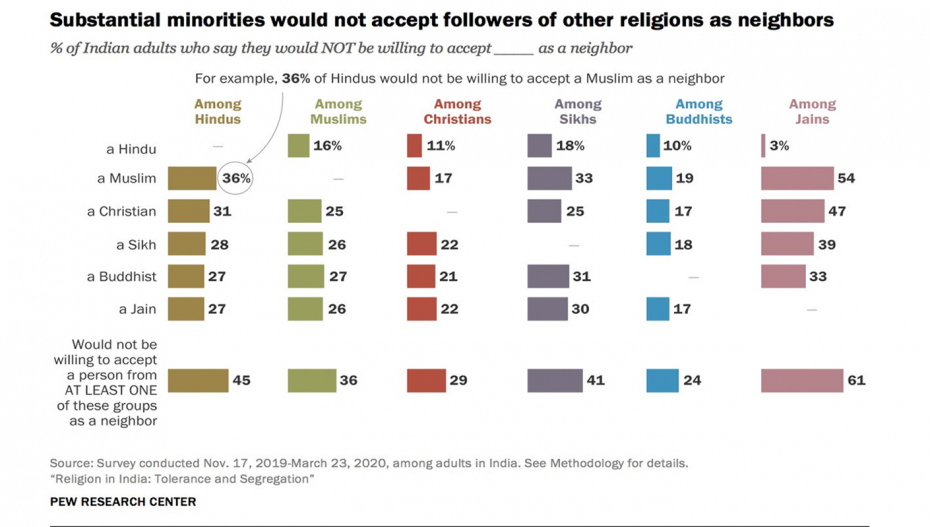 Indians take pride in the diversity, tolerance and freedom of all religions, but have little in common and prefer to live separately, states a new Pew Research Center survey. The findings are relevant, given that India is home to most Hindus, Sikhs and Jains, has one of the majority Muslim populations in the world and is also home to millions of Christians and Buddhists.

Dr Neha Sahgal, Associate Director of Research and one of the lead researchers of the survey, says, “This is the largest sampling outside the USA, considering the diversity in India.” Scientifically, 10,000-15,000 sampling is more than adequate but to represent six different religions and different regional groups, the Pew Center undertook the sample of 29,999 Indian adults. Local interviewers administered the survey between Nov 17, 2019, and March 23, 2020, in 17 languages. The questionnaire was prepared by qualitative interviews which were tested on groups from Uttar Pradesh and Karnataka.

When it comes to friendships, Indians mostly have friends among their own religious groups. Different religious communities live in different areas, and inter-religious marriages remain taboo across the nation.

Mostly, people consent to the possibility of cohabitation with other religious communities. Yet, many would choose to keep a few religions out of their residential areas or villages. Most Jains would not accept neighbors from a different religion, including 54% who would not accept a Muslim neighbor. Many Hindus (45%) say they are willing to have neighbors of all other religions, but 45% say they would not consent to accept followers of other religious groups, including more than one in three Hindus, who do not want a Muslim as a neighbor.

Dr Sahgal says, “Religious segregation in India has a political dimension, especially for Hindus who believe in Hindu Nationalism.” She adds, “People who follow the BJP express an even greater preference for segregation according to the findings of the survey.” This group is more likely to not want a Muslim neighbor.

Many beliefs are not bound by religion in the country. Hindus(77%) and a similar number of Muslims believe in karma, a principal Hindu belief. Around 32% of Christians believe in the purifying power of the Ganges river, along with 81% of Hindus. Despite this, two-thirds of Hindus believe that they are different from Muslims and 64% of Muslims think the same. However, 66% of Jains and half of the Sikhs feel that they have a lot in common with Hindus.

Two-thirds of Hindus want to stop marriages outside the community of Hindu women (67%) or Hindu men (65%). Similarly, 80% of Muslims say it is necessary to stop inter-religious marriages of Muslim women, while 76% say it is very important to stop Muslim men from doing so.

India’s Muslims almost unanimously say they are very proud to be Indian (95%), and express great enthusiasm for Indian culture. Finally, more Indians see diversity as a benefit than view it as a liability for their country, according to the survey.