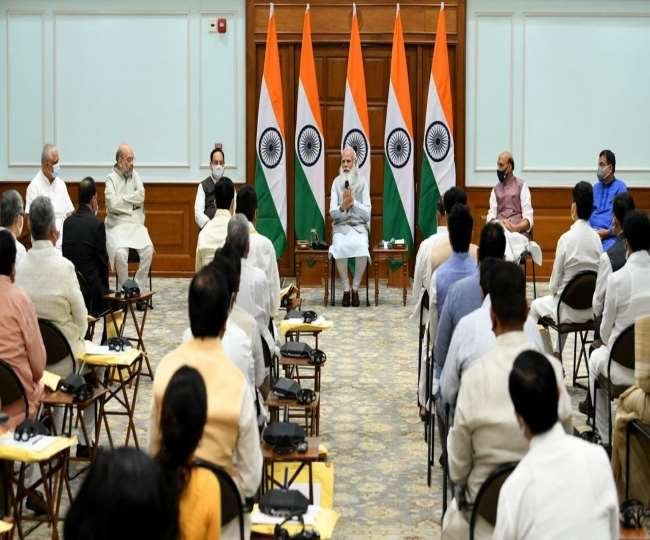 Two years into his second term and months before some key states go to polls, Prime Minister Narendra Modi carried out his first major overhaul of his council of ministers a day after a gubernatorial reshuffle, removing several ministers holding key portfolios and inducting new faces.

One of the rare occasions when the move was known in advance, it still had the element of surprise in the kind of high-profile heads among the 12 that rolled. Three ministries saw both cabinet ministers and ministers of state being shown the door.

It was a major revamp, perhaps hoping to change the face of the government. There were 43 who took oath on Wednesday, including seven old ones who were promoted to Cabinet rank. Prior to this, the Modi government had 21 Cabinet ministers, nine ministers of state with independent charge and 23 ministers of state – a total of 53 – of whom 12 were removed.

The Modi government can accommodate a total of 81 members in the council of ministers, which cannot exceed 15% of the total number of members of the Lok Sabha, which stands at 545.

Over the last two years, four positions in the council of ministers fell vacant due to the exit of the Shiv Sena and Akali Dal, the demise of ministers Ram Vilas Paswan and Suresh Angadi, and now the appointment of Thawarchand Gehlot as governor.

The move is intended to send out a message to the people – at several levels. The new council of ministers would be the youngest yet, the average age said to be 58 years and 14 of them being under 50 years of age. The list includes seven women, taking the total number to 11 in the council of ministers, even after dropping one.

Representation to states and castes, with special emphasis on Dalits and Other Backward Classes (OBCs), was also kept in mind to show inclusiveness or “sabka saath, sabka vikas”. Setting a record of sorts, there are 12 ministers belonging to the Scheduled Castes, who are from eight states — Bihar, Madhya Pradesh, Uttar Pradesh, Maharashtra, West Bengal, Karnataka, Rajasthan and Tamil Nadu. Besides, 27 of the minsters belong to OBCs.

There are a record eight ministers who belong to the Scheduled Tribes and come from Arunachal Pradesh, Jharkhand, Chhattisgarh, West Bengal, Madhya Pradesh, Maharashtra, Odisha and Assam.

There are five ministers from the minority communities, (1 Muslim, 1 Sikh, 2 Buddhists, 1 Christian).

Rajeev Chandrasekhar, who cofounded the Republic TV along with Arnab Goswami, has been made a minister.

Madhavrao Scindia got his reward for helping BJP bring down the Congress government in Madhya Pradesh. More significant politically was taking in Pashupati Kumar Paras, leader of the break-away Lok Janshakti Party group and uncle of Chirag Paswan who has strong reservations against his inclusion. While this indicates BJP’s complicity in the split in Paswan’s party, the cutting down to size of Nitish Kumar’s JD-U with only its president RCP Singh being made minister shows that Modi-Shah BJP is aiming at emerging as the dominant party in Bihar at the cost of its allies. In 2019, JD-U had walked out of swearing-in when Modi had offered only one ministerial berth to the party. Now, two years down, the JD-U is down.

Poll-bound Uttar Pradesh got the highest number of new entrants with seven MPs making it to Modi’s council of ministers. The party faces a tough situation in the state where discontent has been brewing against chief minister Yogi Adityanath. Adityanath, in fact, also had a run-in of sorts with PM Modi and the matter had to sorted out over a series of meetings with top party functionaries, including Modi, Home Minister Amit Shah, BJP president JP Nadda, and RSS deputy chief, sarkaryavah Dattatreya Hosabale. Perhaps the party hopes that the induction of seven ministers from UP would help assuage the sentiments of disgruntled elements.

In fact, political considerations were the overriding, if not the sole, consideration behind the removal and induction of ministers, and one can safely ignore all intricate speculation about concerns over administration and administrative competence and analyses of performance of ministers who were sacked, or such capabilities of those inducted or promoted.

After all, it is only Modi, hailed by fans as “the strongest PM ever”, and his trusted master strategist Union Home Minister Amit Shah, labelled “Chanakya” by that lot, who run the government and take all its decisions. It is not for nothing that this is called a government of two men: most people of the country would not be able to name even 10 ministers in this government. To say that ministers were sacked, appointed, or promoted because of their performance or capability is meaningless when every decision was and will be taken by the Modi-Shah duo.

The concerns were political. The drubbing in Bengal elections was the background, the Assembly elections in some key states, including Uttar Pradesh and Gujarat, is the context, and the miserable handling of Covid-19 pandemic second wave provided the excuse in the case of Health Minister Harsh Vardhan, his deputy Ashwini Choubey. Job losses and plight of migrant workers due to Covid-19 and ensuing lockdown cost Labour Minister Santosh Gangwar his job. Some also believe that Education Minister Ramesh Pokhriyal Nishank and his deputy Dhotre Sanjay Shamrao also fell victim to Covid-19 wreaking havoc with education.

The ouster of Ravi Shankar Prasad is significant in the context of the Modi government’s ongoing battle with social media, especially Twitter, to make the latter agree to the government’s prescriptions.

Not that it was these ministers who were directly or solely responsible for the failures or shortcomings in these departments. PM Modi was directly involved in all these matters, but somebody had to be held responsible and the PM himself could not have resigned. Removing these ministers does imply an admission of government’s failure, though.

Sending out a political message was an imperative, the necessity probably driven home by the Bengal election results that proved a reality check on limitations of what intense propaganda and polarisation could yield. With elections due early next year in Uttar Pradesh, Uttarakhand, Goa, Manipur and Punjab, and in Gujarat towards the end of 2022, perhaps the Modi-Shah led BJP felt the need to expand the council of ministers to provide representation to various states and caste groups and attempt to refurbish the government’s image.

Hours before the reshuffle, a dozen ministers resigned, notable ones among them are Ravi Shankar Prasad who held important portfolios like Law and Justice, Communications, and Electronica and Information Technology, Health Minister Harsh Vardhan, Prakash Javadekar who was heading Environment, Forest and Climate Change, Ministry of Information and Broadcasting and Ministry of Heavy Industries and Public Enterprises, Education Minister Ramesh Pokhriyal ‘Nishank’, Labour Minister Santosh Gangwar, Minister for Chemicals and Fertilisers DV Sadanand Gowda, Minister of State for Health Ashwini Chaube, and Minister of State for Environment, Forests and Climate Change Babul Supriyo.

INDUCTED AS MINISTERS OF STATE