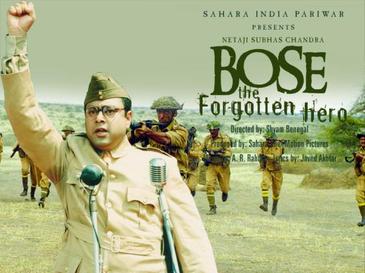 Depending on who is in power, Subhas Chandra Bose, either lies neglected in dusty history books, or is pulled out to lend credence to vested political policies. Somewhere, the real Bose gets lost. On the occasion of his 125th birth anniversary, watching the 2005, Shyam Benegal-directed film, Netaji Subhas Chandra Bose: The Forgotten Hero, is thus a good starting point to understand the man and his idealistic approach to obtaining freedom for his country.

Written by Shama Zaidi and Atul Tiwari, the film focuses on the last few years of Bose’s life, when he is in a tearing hurry to evict the British from Indian soil. Beginning with his parting of ways with Gandhiji and the Congress, the film takes you through his clever escapades from jail, home and country to reach Germany; and thereafter to the East.

Initially, he had what might seem like an impossible or even simplistic plan to obtain German, Italian and Russian recognition of a British-free, independent India. Towards achieving this goal he meets Italian officials who help him enter Berlin. Unfortunately, even as he meets German officials, his strategy of marching to India through Russia with an army of Indian soldiers, who are Prisoners of War under Hitler, is upturned with Hitler attacking the Soviet Union. Unfazed, Bose seeks an appointment with Hitler, fully aware that Hitler is no great admirer of Indians or their ability to run an independent country,

When Bose, played endearingly by actor Sachin Khedekar, finally meets the Fuehrer, they have a rather heated conversation, with the latter flaring up about Nehru’s proximity to the Russians. Clearly not inclined to helping Bose, Hitler advises him to take Japan’s help to enter India from the East, as Japan has defeated the British in Singapore; and gives him a submarine to travel via the old route, around Africa. Using a large globe, to explain the details, the Nazi leader looks all set to take over the world, confident and all-powerful. So, when Bose opines that he made a mistake to attack the Russians, he retorts angrily, “By winter we will have defeated them.”

Forced to abandon his earlier plans, Bose embarks on a journey to the East, with Abid Hasan, one of his trusted aides, leaving behind his Austrian wife, Emilie Schenkel, and their daughter, Anita. After some months at sea, Bose reaches Malaysia where Japanese soldiers welcome them. After that, they travel to Singapore where Rash Behari Bose and soldiers of his Indian National Army welcome Bose and hand over the reins of the army to him. The battle cry Chalo Dilli, Chalo Dilli is coined at this gathering of patriotic soldiers eager to be led by Bose.

Next, Bose has an audience with Prime Minister Tojo of Japan where both are in military gear. “You will have Japan’s unconditional support in ending Anglo- Saxon domination of India,” assures the Japanese premier.

Unfortunately, like the Germans, the Japanese, too, let him down. On the field, Bose’s men realise the Japanese want to treat them as subordinates to provide cover to their soldiers, not as partners fighting a common enemy. But spurred on by Bose, the fiery patriots battle it out and manage to progress towards Assam, hoisting the Indian tricolour at Imphal, destroying an enemy airfield in Manipur and capturing the rail-head at Dimapur.

Eventually, however, their patriotic fervour is not sufficient to counter attacks from the skies.

The ultimate blow is the surrender of Japan after America’s atom-bombing of Nagasaki. “This means we are the only ones in the whole world who have not bent before the Allied Forces,” Bose tells his aides, grimly. Realising that his men are now in grave danger of being captivated and humiliated, he instructs one of them, “Get ready to disband our forces. Whatever happens, we will not bend before the British.”

He, himself, is advised to escape to a safe place. Easier said than done. With only two seats available on a Japanese plane from Saigon to Manchuria, with a very heavy heart, he is forced to leave behind his two trusted lieutenants, Abid Hasan and Aiyer, and take only Col. Habibur Rahman with him. The plane never reaches its destination, crashing en route and killing many on board, including Bose. Benegal doesn’t go into the details of the crash that, till date, is clouded in controversy.

His wife Emilie hears the news on the radio, in Vienna. She rushes to gather their daughter, Anita, in her arms. Anita is all she has left of a selfless love that she knew would always be second to Bose’s love for his country. Perhaps, one day, Emilie’s life could be portrayed on screen…

Bose’s idealistic path was far from easy, and you see his vulnerable moments when he was with Emilie. At one juncture, he tells her, dejectedly, “Every time I am within an inch of achieving my goal, God has other plans. When war broke out in Europe, mass civil disobedience in India would have crippled the British and we would have got our freedom. But Gandhiji did not agree, and I was forced to leave the Congress. Then, when I wanted to take Soviet help, the Communists thwarted my plans. Now, when we were planning to march into India with the Azad Hind Fauj via Russia, Hitler marches into that country!”

These moments of dejection were, however, momentary, and he never gave up. Till the end, he believed INA would gather together again and snatch freedom for its country, sooner than later.

The film ends with Om Puri’s voice-over telling you how the trials of three INA luminaries, Colonel Prem Sahgal, Colonel Gurbaksh Singh Dhillon and Major-General Shah Nawaz Khan, caused a nation-wide stir, including mutinies in the Royal Indian Air Force and Royal Indian Navy. The British could not now depend on their army to keep Indians subjugated and realised their time was up. When the Indian tricolour was hoisted on August 15, 1947 at the Red Fort, Netaji was not there, but who knows when India would have got its Independence without him and INA? asks Puri.

The film is dedicated to Indian National Army, 1942- 1945. What better day than today to remember the love and sacrifices of its men and their leader? And, also to introspect on whether we have let them down, or made them proud?