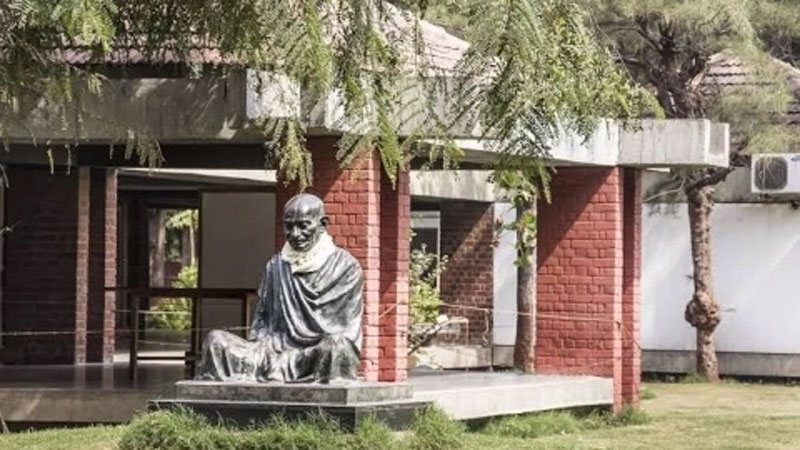 Sabarmati Ashram is all set to hold a flag hoisting ceremony on Republic Day. The irony however is that Ashram inmates the government plans to displace to make space for a ‘’world-class monument’’, will also attend the function along with special dignitaries and school children.  The Ashramvasis and their descendants have lived and worked with Mahatma Gandhi while he was living on the banks of the Sabarmati river. If all goes as per the government’s plan, this would be the last Republic Day Ashramvasis will be celebrating,

The Gujarat government formally gave a nod to the Rs 1,200 crore Sabarmati Ashram redevelopment project on March 5, 2021. According to the formal notification, the project entails merging areas around the Sabarmati Ashram to make a “world-class memorial”. Located on the banks of the Sabarmati River, the ashram, in its present form, exhibits books, manuscripts and photocopies of  Mahatma Gandhi’s correspondence, photographs of his wife Kasturba and other ashram associates, life-size oil paintings and actual relics like his writing desk and spinning wheel. The Gandhi Museum inside the ashram was developed by renowned architect Charles Correa in 1963.

There are over 260 tenant families, mostly Dalits, whose forefathers had worked directly with Gandhi living here between 1915 and 1930. The families pay rent anywhere between ₹ 100-150 per year, depending on the size and location of the house . Of these, 80 families have decided to protest the government’s move.

The Sabarmati Ashram, managed by SAPMT, is spread over five acres of land. When the new redevelopment project comes to fruition, the memorial will occupy 55 acres of land — merging the settlement and the road dividing the two structures with the Ashram.

The government has fixed one-time compensation of Rs 60 lakh. For those who refused the compensation, the government proposed a new building near the new structure. Now, the officers have begun a new round of negotiations. Nitin Rathod (78), a retired government officer who has been living there for seventy years, is not happy with what the government has to offer. “There are so many loopholes in what they are promising. They first said that they would build a tenement for all the Ashram inmates behind the settlement, with schools and ‘Anganwadis.’ Now, they are saying that since they don’t have land, they can only offer compensation. I have lived in this house for nearly 70 years and my sons have set up shops here. They cannot expect Rs 60 lakh to cover the cost of my house and my business,” he said. Nitinbhai is one of those opposing displacement.

His wife, Nanduben Rathod who is an Anganwadi worker, told VOI, ‘’Come what may, I will not leave my home. The government is deliberately targeting the poor to benefit the rich. ‘’

Neetaben Mahadev (63), a Gandhian activist, told VO!, “When put in perspective, Rs 60 lakh is not enough. There would be tax deductions and compensation has already been brought down from Rs 71 lakh to Rs 60 lakh. While the houses do belong to the trust, people living here are on rent. There must be more clarity.’’

Bhavna Ramrakhiani, an activist, is convinced that any redevelopment project, judging by the past patterns, is exclusionary in nature. “Take the example of Kakaria and Ravivari. They have made public places expensive for people. I am afraid this might happen with the newly proposed Sabarmati Ashram as well,” she said.

On relocation, Ramrakhiani said, “Taking the most recent example of riverfront relocation: The rehabilitation done by the authority was largely satisfactory, but only in terms of shelter. People living on the riverfront had their shops/offices in the vicinity. They were not earning much. Suppose someone earns Rs 6,000 per month and is relocated some kilometres away from his original house, he has to incur more expenditure on commuting.’’