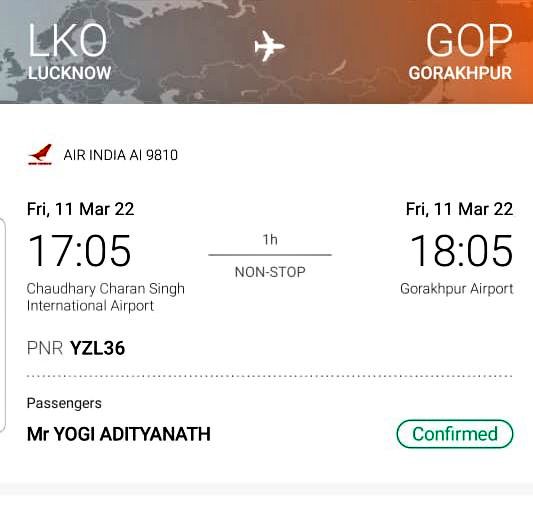 Politics is the game of uncertainty but National Spokesperson of Samajwadi Party I.P. Singh seems to have taken for granted that as he said Uttar Pradesh is going to rout out Yogi Adityanath and the BJP in the forthcoming assembly election as results will come on March 10.

Mr. Singh booked a Lucknow to Gorakhpur ticket for Yogi. He interestingly booked an economy class ticket on Air India.

A BJP MP from Uttar Pradesh told Vibes of India that this is blatant arrogance on part of Samajwadi Party and the people of Uttar Pradesh will not forgive the SP for this lowly act.

“We welcome the announcement by the Election Commission and are confident of a landslide victory in the forthcoming election as we have the backing of the people.”

his tweet reads,”10th March will be the day of the ‘Janta’, 10th March will see the sun of truth rising in the state of Uttar Pradesh as Samajwadi Party will get a massive mandate to run the Government.”

Important to note here is that just a few hours ago the Election Commissioner announced the date of the Election in the state and 10th March holds importance as it will be the day when votes will be counted.

Much awaited Uttar Pradesh election will happen in seven phases with the first phase starting on 10th February and the vote counting on 10th March. Samajwadi Party is leaving no stone-unturned in taking on the Yogi Government be it with their rallies or with their social media strategy as everyone knows how much importance BJP gives social media as a part of their overall campaign.

This twitter frenzy that the SP leader has created points to the fact that this election will be a blockbuster and ‘Janta’ will be the ultimate winner.

Court of Inquiry on Chopper Crash Will Be Thorough...