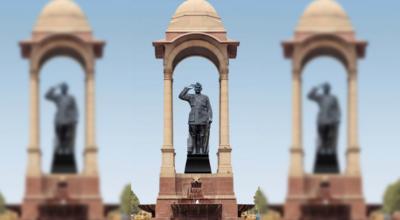 Prime Minister Narendra Modi announced on January 21 that a statue of him will be installed at the India Gate to mark Netaji Subhash Chandra Bose’s 125th birth anniversary.

“At a time when the entire nation is marking the 125th birth anniversary of Netaji Subhas Chandra Bose, I am glad to share that his grand statue, made of granite, will be installed at India Gate. This would be a symbol of India’s indebtedness to him,” he wrote on the micro-blogging platform.

Prime Minister also said that he will unveil the hologram statue on 23rd January at the same place till the grand statue is completed.

“This is a befitting tribute to the legendary Netaji, who gave everything for India’s freedom. PM Narendra Modi’s decision to install Netaji’s statue at India Gate will inspire our generations to come,” Shah tweeted.

The birth anniversary of Netaji Subhas Chandra Bose is celebrated as Parakram Divas or a day of valour across the country. The Central government announced the same last year in order to honour and remember Netaji’s indomitable spirit and selfless service to the nation.

The Republic Day celebrations in the country will now begin every year from 23rd January instead of 24th. This decision was taken to include Netaji’s Birth anniversary.