The 2021 Gems Of Malayalam Cinema 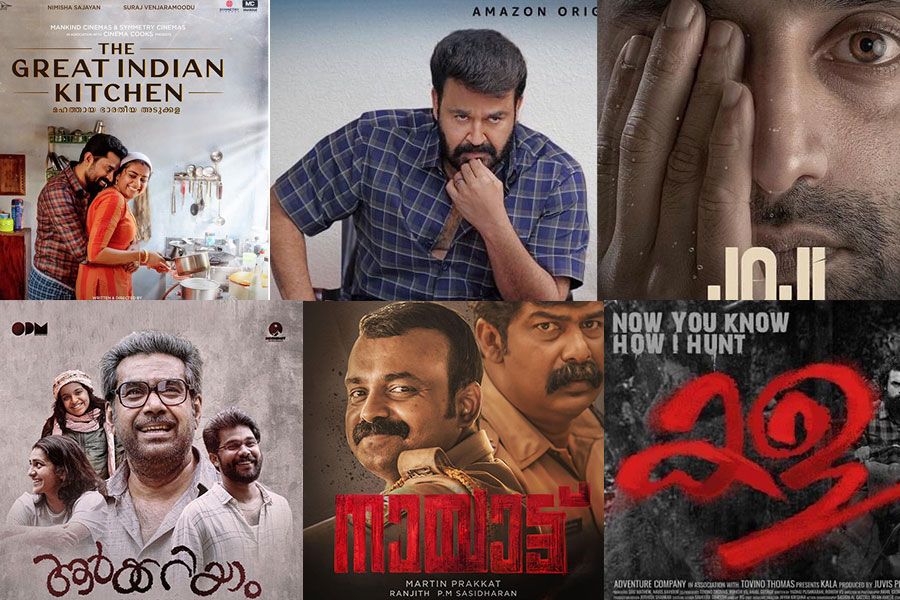 2021 belonged to Malayalam cinema. Primarily catering to its relatively small (compared to Telugu and Hindi) native audience, diaspora and an elite section of cinephiles, Malayalam cinema stood out for one superb factor: its ingenuity. The filmmakers themselves turned the pandemic into opportunity as they created rooted, atmospheric cinema at a budget that was a fraction of what most would use for promotion.

The range of human stories that the Malayalam industry was churning out at a breathtaking speed was a force to reckon with, nationally. Nuanced takes on patriarchy, the caste and religious divide, unrequited love – these films dealt with a gamut of subjects, yet, each entertained and stayed with us. Here’s taking a look at the gems the Malayalam film industry offered up in 2021.

Director Jeo Baby’s movie may have had a quiet OTT release, but, soon after, the film exploded nationally. Jeo uses the form of repetition to show how generations of women were entrapped and exploited within the walls of the kitchen. Subtle yet direct, it would have made patriarchs squirm in the comfort of their homes.

Director Jeetu Joseph couldn’t believe the global success of Drishyam and obviously, dreaded the idea of a sequel. But he stuck to the basics and turned Drishyam 2 into an intimate family drama: which succeeded.

Director Rohith V. S and writer Yadhu Pushpakaran unapologetically use several tricks to set up our expectations in this 130-minute non-stop flow of escalating violence – and then invariably subvert them.

Martin Prakkat’s film examines how the honest truth becomes the first casualty of political vanity. A drama set against the election season, the film dissects the media circus that keeps the public distracted from issues that actually matter. Sounds familiar?

Jude Anthany Joseph’s feel-good drama starts an important dialogue on a touchy subject— abortion and women’s rights, and gets the credit for taking ‘her body, her choice’ debate to every living room.

Filmmaker Mahesh Narayanan’s craft is at its zenith in this reimagination of director Mani Ratnam’s classic gangster drama Nayakan. Mahesh’s experiment with a variety of shots and editing techniques, clear screenplay and notable performances, including from Fahadh Faasil and Nimisha Sajayan, gives it an epic status.

Kuruthi is a brave attempt to explore the rising tide of hate, which turns friendly neighbors into sworn enemies. The film captures the radicalization of young minds, which breeds violence, tragedy and destroys the peaceful coexistence of people of different faiths. Quite the greenhorns themselves, director Manu Warrier and writer Anish Pallyal leave it for us to decide the end of this story.

Director Rojin Thomas’ film explores how technology, which has brought the world closer, is driving a wedge between personal relations. The film reflects the truths of our time, where the lust for fame turns people into self-obsessed and indifferent to the feelings of others.

Director Manu Ashokan has helmed the film from a script written by Bobby and Sanjay. The slow-burn thriller is about a grieving father trying to get to the bottom of who killed his daughter. Suraj Venjaramoodu is in top form and Aishwarya Lekshmi and Tovino Thomas also deliver solid performances.

Written and directed by Senna Hegde, the story plays out in a day. Set in Kanhangad, the film revolves around the patriarch of a family. The highlight of this comedy is its authentic portrayal of the lifestyle, culture and family relations of people living in Kerala’s countryside.

Lijo Jose Pellissery’s film is a mix of mythology and the psychology of human nature. The film argues that by nature, man is wicked, and when provided with the right time and place, people will drop the pretence and embrace chaos. Enjoy the mind-melting climax.

The Malayalam film industry is ending the year with a bang with the release of Basil Joseph’s homegrown superhero movie, Minnal Murali. Written by Arun Anirudhan and Justin Mathew, Minnal Murali offers solid performances from Tovino Thomas and Guru Somasundaram.