Trump Does A Putin: Gets Taekwondo Nineth Dan Black Belt 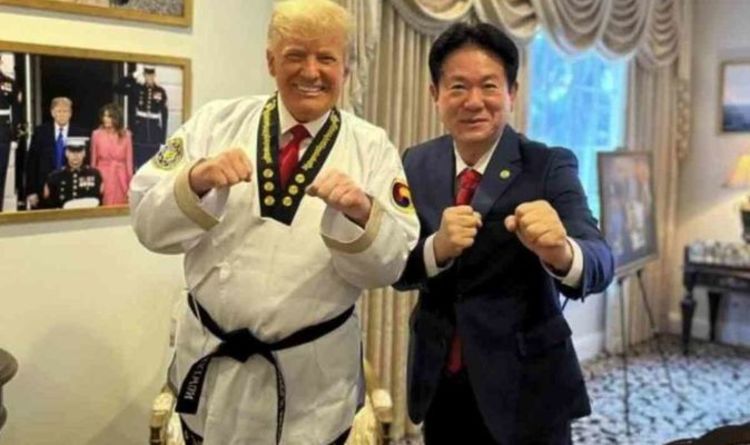 In an incident which reinforces the image of Donald Trump as the Lalu Prasad meets Athavale meets Sakshi Maharaj equivalent in US politics, he is conferred with, hold your breath, ninth degree black belt in taekwondo.

The World martial arts body claiming to be non-political and informed that the choice of former US president for the title was due to his touting the benefits of ‘self defence’. Trump is learnt to be elated by receiving this honorary title.

As expected, memefest on social media erupted as soon as the images of the ceremony appeared on Facebook. Donald Trump was handed over the honorary black belt by the Seoul based World Taekwondo Federation (Kukkiwon) President Lee Dong-seop at Trump’s private resort in Mar-a-Lago in Palm Beach, Florida.

Some posts were funny.

Unfazed and typically oblivious of the irony of it all, Trump has declared that he will wear it in Congress if he makes it back into the White House. The Ninth level black belt is the highest that is attainable by a practitioner of taekwondo.

Trump is not the only world leader who has attained 9th Dan Black Belt in Taekwondo. In 2013 Vladimir Putin also received a black belt and was made a grandmaster of Taekwondo during an official visit to South Korea. Putin is known for his physical fitness which is not the case for Trump though.

Another Twitter user said ” he has not done anything to promote martial arts or fitness in general. It is the case of just another person sucking up to Trump’s vanity.”