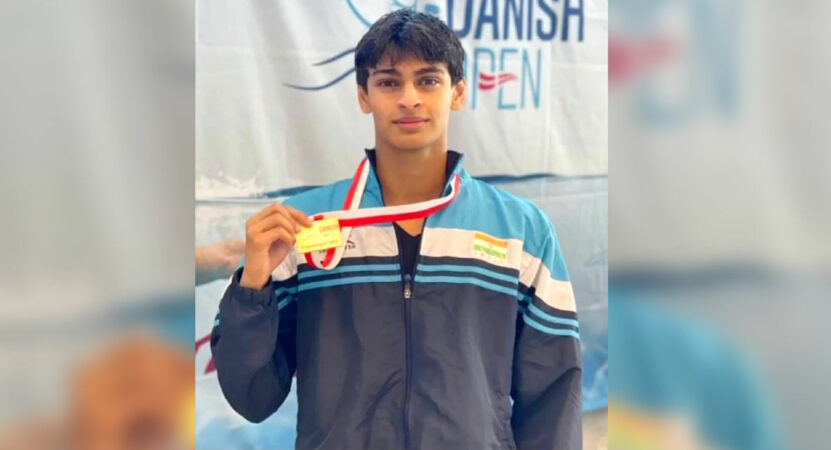 Vedaant Madhavan, the 16-year-old son of the actor R. Madhavan won a second medal, this time gold in the men’s 800m freestyle at the Danish Open in Copenhagen. He has already won 1500m Silver in the same tournament.

Vedaant won this gold in 800m freestyle with a timing of 8:17.28, 11:48 seconds less than his last personal best. He beat the runner up Alexander L Bjorn by 0.10 seconds. The family of strict vegetarians is getting pat on the back by the people advocating vegetarian food over non-vegetarian food. Though nothing suggests one is better than the other.

Started as a taekwondo aficionado in his childhood, when he participated at the national level, Vedaant Madhavan took to swimming four years ago. He has shifted base to Dubai to be coached by Dronacharya awardee Pradeep Kumar. Apparently, the move has paid off. It is evident from the current winning streak.

Vedaant is appreciative of his parent’s support especially of his mother Sarita Madhavan who is living with him in Dubai. Despite coming from a background with a celeb father, the youngster’s maturity and attitude are striking. Vedaant’s father is an acclaimed actor in Bollywood and South Indian Film Industry. His known performances include ‘Three Idiots’ and “Guru”.

Vedaant’s performance though is a long way from international standards. The timing for the Gold medal at Tokyo Olympics by US’ Robert Fink was 7:41.87. The world record stands at 7:32.12. Unlike other swimmers of his age, the junior Madhavan does not spell out his dreams of the Olympics as yet, preferring to focus on short term goals.

The proud father R Madhavan took to tweeter to announce to the world his son’s achievement. He has thanked the coach also in the tweet. The superb actor also is known for his grounded manners.