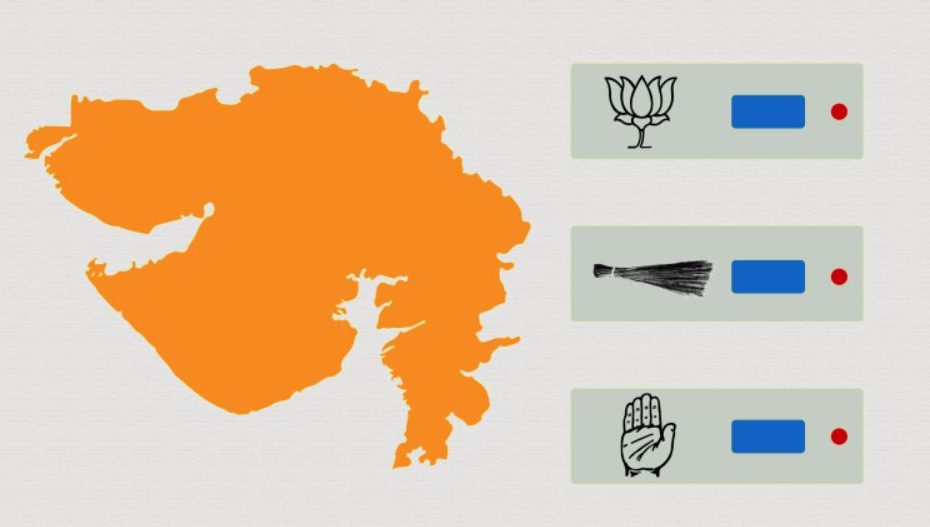 Even as it is still a year to go for the 2022 assembly polls in Gujarat — assuming that the elections are not advanced to hold it along with Uttar Pradesh in March-April as is being speculated — the BJP and the Congress, along with an apparently serious contender AAP, have already launched the preparations.

With the Congress in a disarray as of now and the Aam Aadmi Party poised to further queer the pitch for it, the BJP seems to have an upper hand having already hived off all its ministers, including the CM, to usher in a new team of greenhorns last month.

Vibes of India takes a quick update on what are the parties doing, with their masks off and social distancing thrown to the winds in the wake of an assumed lull in the Covid-19 pandemic.

Bharatiya Janata Party, in a hurry:

Emboldened by the BJP’s series of election victories since February and by the fact that he played a pivotal role in unseating the entire Vijay Rupani Cabinet, Gujarat BJP chief CR Paatil is calling the shots. After ensuring MLAs from his South Gujarat region got good ministries, including finance and home, in the Bhupendra Patel Cabinet, he is asserting himself further.

Call it arrogance or confidence, Paatil on Tuesday announced that 100 sitting MLAs would be dropped for the 2022 polls. At a party function in Himmatnagar, he also told all and sundry: “Don’t come to me with recommendations, no connections with work. Either perform or perish.”

This is BJP, desperately pulling out all stops to undo the perceived damage caused by the outgoing chief minister and his team — to such an extent that all of them were sent packing lock, stock and barrel.

After the party’s huge win in Gandhinagar Municipal Corporation elections with 41 out of 44 seats early this month, CR Paatil even said, “The strategy of changing the ministry went in the BJP’s favour.” It is another matter that the BJP managed huge victories in the local body polls in February, held under Vijay Rupani’s chief ministership.

Sources said while urban areas continued to be the BJP’s strongholds, the party is now focussing on the rural areas where the Congress party had better base.

After a frustrating delay, the Congress high command has appointed a new Gujarat in-charge in place of late Rajiv Satav, who fell victim to Covid-19 complications. The party has named Raghu Sharma, Rajasthan’s Health Minister who has been credited for effectively handling the Covid situation there and, more significantly, a close confidante of Chief Minister Ashok Gehlot. Gehlot played a stellar role in the Congress’ bright performance in the December 2017 Gujarat elections.

The party also now hopes to get a new state president and Leader of Opposition in place of Amit Chavda and Paresh Dhanani respectively. They had resigned thrice earlier in the wake of the party’s poll debacles, but were continued for long by the leadership that left its Gujarat unit in a limbo.

With Raghu Sharma, who is accessible and has risen from the ranks, the party expects to return to some action. Sharma is learnt to have conveyed to the party that there is no dearth of issues in Gujarat to attack the BJP but the first priority is to set the house in order. The Congress also hopes to find some youthful energy with Dalit leader Jignesh Mevani joining hands with its State working president Hardik Patel. They have the ability to lend the necessary aggression to the party’s campaign.

The Aam Aadmi Party already sees a state-level opportunity after it managed a mind-boggling 21.77% vote share in the recent Gandhinagar Municipal Corporation elections for 44 seats. Though the AAP won only one seat, it successfully put a spanner in the Congress works.

Coming after the party wiped out the Congress from the Surat Municipal Corporation winning 27 seats in February, AAP supremo Arvind Kejriwal is excited. He convened a meeting of the entire Gujarat unit of the party, including all 27 Surat councillors, in New Delhi earlier in the week to give them a pep talk. Besides stating that Gujarat offers a huge opportunity to the AAP, Kejriwal even told them not to be ‘sold out’ going further. According to a councillor who was there, “He said AAP doesn’t have money, but you people don’t get carried away and look at the big picture for the future.”

While a third front has never succeeded earlier in Gujarat and the AAP doesn’t have either a state-level network or effective leadership, it is sure to prove a spoiler for the Congress if the latter doesn’t get its act together. The Congress may call it the BJP’s ‘B’ team, but the AAP is only getting into the space being ceded by the principal opposition party.