Abandoned As Baby, Ranna Is On Her Way To US To Start New Life As Ally Ruth 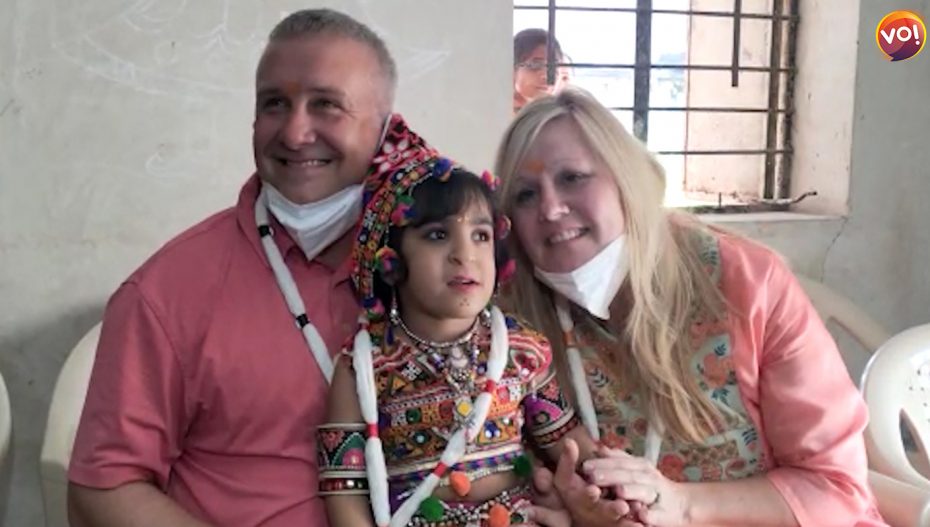 On Friday morning, at Jamnagar’s Kasturba Stri Vikas Gruh a five-year-old child’s life changed forever. Abandoned as a baby, Ranna was adopted by a couple from the US. The child wore traditional clothes to also mark the auspicious celebration of Navratri and beamed happily throughout the day.

The couple, Dustin and Tory, have decided to change Ranna’s name to Ally Ruth.

When Vibes of India contacted Karsanbhai Dangar, the president of the organisation, he said “Five years ago, we got this call from the government hospital about a two-day-old baby abandoned on the side of the road. The police tried to trace her parents but failed. Hence, we, in accordance with the hospital and police department, brought the child into our family,”

“Adoption is a centralised process. The central adoption resource authority (CARA) undertakes this process and connects the needful kids to suitable adoption-seeking families. They take utter care in the selection of both kid and family as it is crucial for both to adjust and sustain a lifelong loving bond. A lot of cross-checking and verification is done to make sure that everything is viable. Once they select the family, their home is verified according to their given status of wellness, be the family in India or abroad,” he explains.

When asked about other recent adoptions, he said the organisation currently has six more kids. Three were adopted in the last 10 days. One more child is likely to be enrolled in a few days. The enrollment is done after due health checkups, he stated.

The US couple already had 3 children. But they felt a need to give another a new lease of life and thus they applied for adoption and ended up with Ranna, says Karsanbhai.

He added that this was the organisation’s 287th adoption, under the central rule that 40% of the children have to be adopted by non-Indians and 60% by Indians.

Poonamben Madam, Jamnagar MP,  recalled meeting Ranna a few years ago when she visited Vikas Gruh. She expressed her faith in the US couple to provide Ranna with a bright future.

Shri Kasturba Stri Vikas Gruh (KSVG) was founded in Jamnagar, India, in 1957 with the purpose of lifting women out of injustice and exploitation. KSVG provides shelter for infants, girls and women, counselling services, a legal aid centre, a school for orphaned, abandoned and victimised girls, crafts training, a library and a hostel for girls and women from outside of Jamnagar.