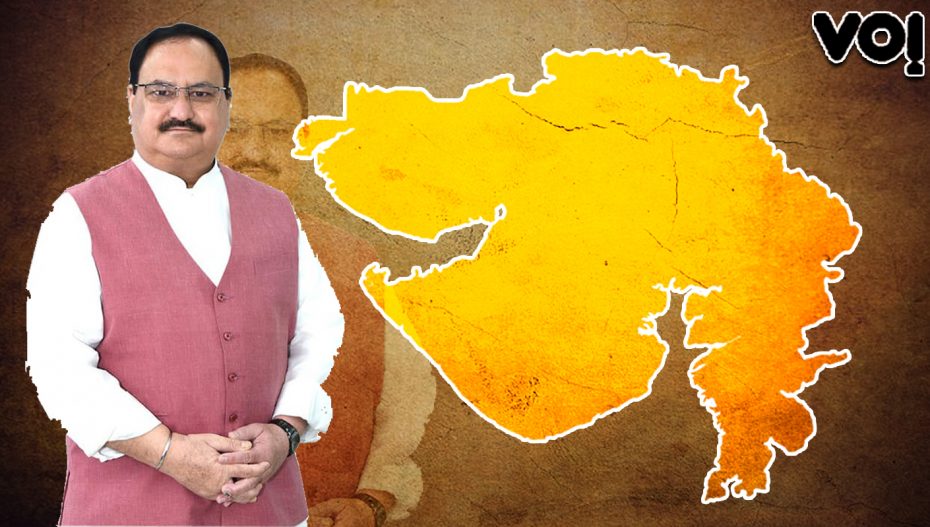 Always known to be the campaign mode, whether in power or not, the BJP’s national leadership has already taken the entire strategy of the Gujarat elections in its own hands. This is why after two back-to-back tours of Prime Minister Narendra Modi and Home Minister Amit Shah recently, national BJP President JP Nadda is arriving here on Friday morning.

Though the BJP has never lost a single election in its prized state since 1995, sources indicated that the party is not wishing to leave anything to chances, given that it is committed to break the 1985 Madhavsinh Solanki Government’s still unbroken record of winning 149 out of 182 seats.

And this time the challenge is tougher, with the Aam Aadmi Party also in the picture and the Congress having invariably retained 50 or more assembly seats even in its worst performance. The best was in 2017 when the Congress bagged 77 seats without a chief ministerial candidate. Of course, the BJP has already poached 8 of them and the Congress has been reduced to 65 seats.

The BJP realises well that despite Gujarat being its fort, it is tough to cross the 149-seat record it intends to break.

Small wonder that the hands of JP Nadda are full, but he has no public gatherings on his agenda but his purpose is to get a first-hand feedback on the State of affairs in Gujarat BJP.

During his various meetings, there is likely to be a special discussion on at least 22 seats that the Congress has never lost and other nine on which it had lost by less than 3,000 votes. Sources claimed there was also a possibility of some prominent public figures, including Khodaldham Trust chairman Naresh Patel who was being wooed by all parties until now, and several others may embrace the BJP.

According to Gujarat BJP’s spokesman Yamal Vyas, the BJP President is expected to land at the Ahmedabad airport at 8  am and head straight to the Sabarmati Ashram.

His next important schedule is an interaction meeting at the Gujarat BJP headquarters, Shri Kamalam, with all State leaders, members of the State Parliamentary Board, all MLAs, city BJP presidents Central, the elected of all eight municipal corporations as well as former MPs and MLAs. The BJP chief’s next engagement is his address to all State as well as district and block level office-bearers of the party at the Convention Hall of the Gujarat University.

On the same evening, he will undertake meetings with Chief Minister Bhupendra Patel, the Core Committee and members of the various election committees. Before that, Nadda would also reach Vadodara to participate in a sant sammelan.

Before he leaves for Delhi on Saturday evening, he will have a closed-door meeting with the Chief Minister Gujarat BJP president CR Paatil.