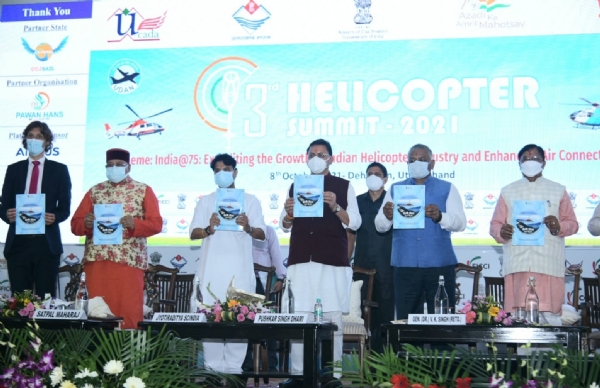 Union Aviation Minister Jyotiraditya Scindia has announced a new helicopter policy at the ongoing Heli Summit in Uttarakhand. The new policy proposes to develop helicopter corridors on Route 82 in 10 cities across India. To create awareness about helicopters and their flight operations in district administrations across India, The booklet, “Heli-Disha” was released by Scindia.

Scindia said that heliports would be developed on three expressways, including Delhi-Mumbai Expressway, Ambala-Kotpuli and Ambala-Bathinda-Jamnagar Expressway. The helipads to be built on all three expressways will be used in case of medical emergencies and accidents to transport victims to the hospital.

Under the new policy, he said, the government will be upgrading a centralised “Heli-Seva” portal and all permissions for a helicopter flight will be granted online. The Minister also disclosed that officers both from the Airports Authority of India (AAI) and Air Traffic Control (ATC) will engage with helicopter industry stakeholders so that adequate training is given to all individuals regarding issues concerning helicopters.
The new policy aims to abolish all landing charges and parking deposits for helicopters or helicopter companies to boost commercial helicopter operations.

Helicopter services will initially start in 10 cities in the country. These include Mumbai’s Juhu-Poona-Juhu, Mahalakshmi-Race Course-Poona, Gandhinagar-Ahmedabad-Gandhinagar route. However, no further details have been released on how soon the helicopter service will start. But the aviation ministry will set up a helicopter acceleration cell to start the service quickly.

During the second wave of Covid-19, in April-May, there was a great need for air ambulances in Gujarat for the treatment of coronary heart disease patients. Among them, 15 patients from Rajkot were shifted to other states by air ambulance. Out of which a hefty fee of lakhs of rupees was charged from the patients to reach Delhi and Chennai.