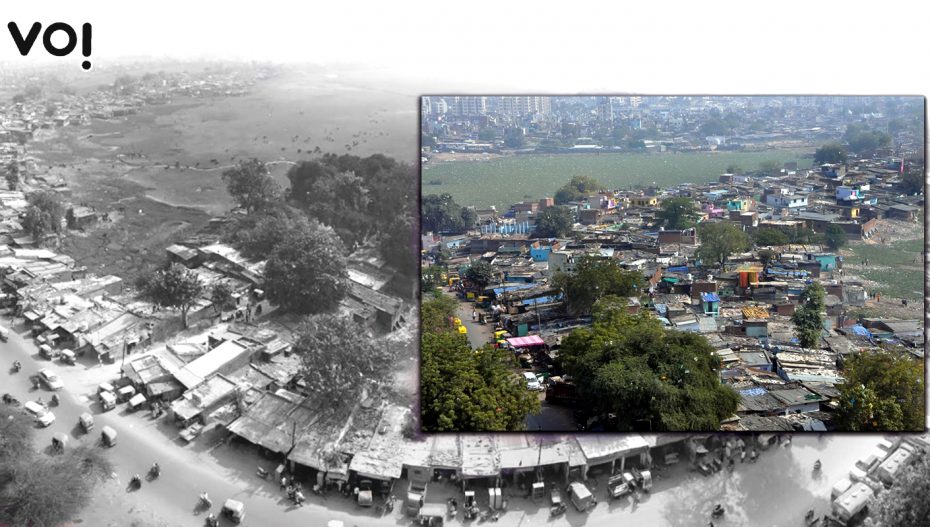 A small, dingy room in Nawab Nagar — barely a kilometre away from a filth-choked ravine that runs parallel to the slums surrounding an almost dried-up Chandola Lake in Danilimda ward — is all Mumtaj Begum Pathan (70) has to her name.

“I just have one light bulb and a fan in my room but I have a pending electricity bill of over ₹17,000,” Mumtaj says, pulling out an old, crumpled power bill showing pending dues of ₹16,120.

“I beg for a living and have no one to look after me. How am I supposed to pay ₹17,000?” asks Mumtaj as she chastises her neighbours for not giving her lunch today.

The Chandola lake is a large reservoir with slums dotted along its rim. As you stand atop a tekri, you could see the flies buzzing around as a child openly defecates along the littered banks on the lake. Sania Bano (45), a resident of these slums says that most of the people living in this area were Mulism and Dalits. “The lucky among us have single-pit latrines, even though it’s a crude one. Others have to answer the nature call out in open,” Sania said.

Recently, Shehzad Khan Pathan (32), the corporator from Danilimda ward and Leader of Opposition in the Ahmedabad Municipal Corporation (AMC), sent a legal notice to the municipal commissioner and the state government, demanding basic amenities and housing under the ‘Pradhan Mantri Awas Yojna and Regulations for the Rehabilitation and Redevelopment of Slums 2010’ for the 5,500 families living in the vicinity of Chandola lake.

Pathan said the AMC had promised to develop the lake a couple of times and had even allocated a budget of Rs 50 crore. “However, not even a single penny has been spent so far. When I ask AMC for a reason, they say the plot comes under the state’s irrigation department. I went to the Collector who said they have written to the AMC, giving a go-ahead to develop the plot. The only condition was they cannot make any revenue out of it – like setting up stalls as seen at Kankaria. It has been five years since the AMC handed over the letter but they refuse to acknowledge it.”

“The issue is being handled like a football: the corporation passes the buck to the Collector, the Collector asks the irrigation department for development, the irrigation department says developing a plot of land does not come under its jurisdiction and sends it back to the Collector who again sends the proposal to AMC. Amidst all these, 5,500 families are being denied basic amenities like drinking water, public toilets, sanitation, drainage and disposal of waste needed for a meaningful right to life as guaranteed under Article 21 of the Constitution,” Pathan said.

Sahin Bano (35) a single mother of two who earns a paltry ₹60-80 per day by stitching garments said she has a pending electricity bill of up to ₹2 lakh. “The power company has cut our connection. We have no choice but to light our homes by connecting pole wires.”

Sahin also points out the daily struggle of getting water. “We go to anyone having a private borewell and take as much water as we can by paying ₹ 250-300 per month,” she said, adding that the corporation is in the process of setting up a borewell connection, but the pipes are not enough. Pathan adds to this,” It took me four years of convincing the AMC to set up the borewell. They have now done that, but further networking of all houses to the borewell through pipes will have to be done by us. Borewell is also a short-term solution as when summer arrives, the groundwater dries out. AMC needs to take the handover of the area and start the development project right away”

“The authorities say we are illegal residents and therefore the development of the area is not being carried out. My question is, how can they term us illegal when our families have been living here for over 50 years with all required paperwork?” asks Sahin.

Pathan told Vibes of India (VoI) that, in case the AMC does not reply to the legal notice, he is ready to take the matter to the High Court. “We will, of course, take to the streets as well,” said the AMC LoP, who has a reputation for holding agitations for the development of his constituency.

The residents, in turn, have full trust in Pathan, the corportor who won the Dalinamda seat for three consecutive terms. “He will make things work. We have waited for 50 years to get basic amenities, we can surely wait for a couple of more months,” said Saiba Bano (40), a resident of Nawab Nagar.

The lake came into focus when in 2000 when a resident of Ahmedabad filed a public interest petition seeking court orders to save the lake. In 2001, the Gujarat High Court gave an interim judgement stopping all the new constructions in wetlands. As many as 21 years later, the vicinity surrounding the Chandola lake is swarming with party plots.

“As many as 50 tractors are seen there every day, undertaking illegal construction. When I appeal to the AMC to take action, the officer says it’s not under our jurisdiction. When I ask the Collector to arrest illegal construction by bringing in land grabbing laws there, the Collector also says it is not under my jurisdiction,” Pathan said, adding that “as it is a minority settlement, the BJP is paying to the problems of the dwellers.”

The AMC officials and the Collector’s office were not available for comment till the publishing of this story.