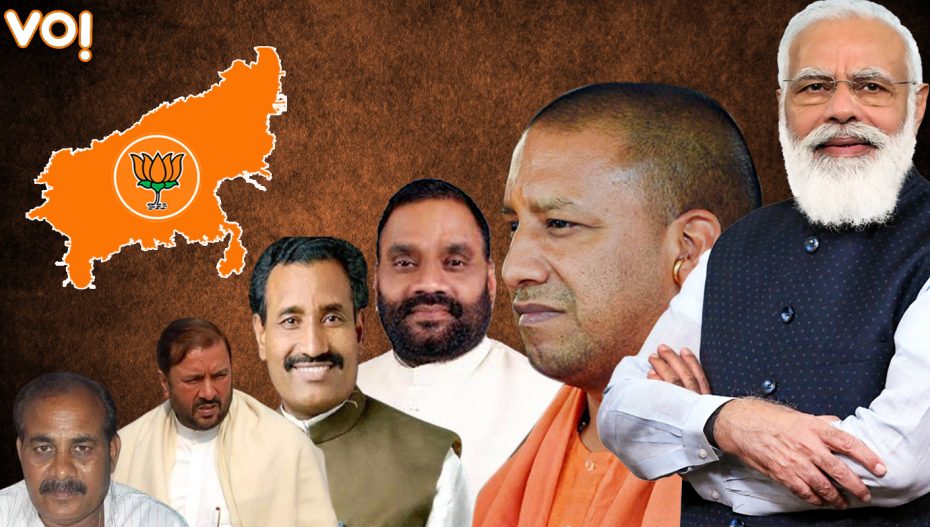 Defections and cross-over are par for the course before an election and more so in a state like Uttar Pradesh where politics is the lifeblood of survival of a large, extended community that depends on it in one way or another. However, the turn-around rarely added up to a revolt. Individuals left the parties they were elected on because they feared they would be denied tickets or they were in search   of greener pastures. In cases, they were pressured by their voters to look for an option where the incumbent party had become unpopular and possibly facing a rout.

In the last few days, the BJP in Uttar Pradesh, which polls in February-March, lost a spate of ministers and legislators to the Samajwadi Party that has emerged as its principal rival. The quitters included two senior ministers, Swami Prasad Maurya and Dara Singh Chauhan. Maurya’s departure hit the BJP really hard because he took away half a dozen of his loyalists with him.

Certain trends have emerged. Most of those who left were from the Other Backward Classes or backward castes that form the spine of the BJP’s support in UP. A few Brahmins and Dalits also followed suit. They gravitated towards the SP and not the Bahujan Samaj Party or the Congress. Maurya and Chauhan were originally with the BSP but left because they were allegedly upset with the BSP chief Mayawati’s “mercantile” approach to politics which, they felt, repudiated the core of Bahujan politics and the commitment that the BSP founder, Kanshi Ram, had injected in them. Chauhan was briefly in the SP too but exited when he discovered that the SP was too angled in favour of the Yadavs and had left little space for the more backward castes which he represented. Several of the defectors are from Poorvanchal, the eastern region, that returns a majority of the MLAs and MPs. Prime Minister Narendra Modi’s Varanasi constituency is seated in the heart of UP’s east while the chief minister Yogi Adityanath’s Gorakhpur home turf and political “karma bhoomi” is also in the east.

Questions were naturally raised over why Chauhan and Maurya resigned a little less than a month before UP voted and if they feared they were not getting tickets. Indeed, the BJP’s cheerleaders on social media have argued that most of the turncoats were “told” they were being rejected. It was also contended that in West Bengal, the BJP had adopted defectors from Mamata Banerjee’s Trinamool Congress Party, “rewarded” them with tickets, bolstered their chances but the experiment didn’t help because many lost to the TMC. This large scale TMC “import” was suddenly cited as a reason why the BJP was routed in West Bengal. The SP would face the same fate, warned the BJP’s social media endorsers.

The line didn’t ring true because Amit Shah, the home minister, who monitors UP microscopically, put the state general secretary, Sunil Bansal and the deputy chief minister Keshav Prasad Maurya on the job of dissuading the deserters instead of letting go of them, as the Congress tends to do. Indeed, this morning, there was a new break that Maurya could return to the BJP. He himself went on record to deny the news and emphasised he was going to the SP after which a court issued an arrest warrant against him for an alleged hate speech he had delivered in 2014.

Why was Keshav Maurya, who fancied himself as the CM in 2017, deputed to speak to the runaway MLAs? His choice reflected a belated awareness on the BJP’s part that its formidable backward caste base had cracked and only an OBC leader had an outer chance of warming up to the deserters. A BJP insider said, “It is clear that our party’s OBCs are on the warpath. They hoped that the leaders would not project Adityanath as the CM face again and give Maurya a chance. That didn’t happen and it was the last straw on the back of the OBCs.”

Adityanath is a Rajput, originally from Uttarakhand, who adopted Gorakhpur as his home under the tutelage of his spiritual guru, Mahant Avaidyanath, who was a leading light of the Ramjanmabhoomi “andolan” and headed the Ramjanmabhoomi Nyas or trust entrusted with the task of building the Ayodhya temple. From day one after taking over as the CM, the principal complaint against Adityanath was that he overtly patronised the Rajput in politics and the institutional domain, notably the administration and police. It was alleged that non-Rajputs, especially Brahmins, were “victimised” while those from the other castes were ignored or discriminated against.

Under duress, in 2018, Adityanath appointed a backward caste social justice committee that was mandated to carve a sub quota of reservations for the more backward and extremely backward castes. The appointment followed a perception that the smaller and marginal backward castes who constitute a wide swath of votes across UP missed the reservation bus because the majority of the benefits were cornered by the Yadavs, Kurmis and Lodh-Rajputs. The committee was headed by Raghavendra Kumar, a retired High Court judge. Although the panel submitted a 300-page report which broadly suggested that the 27 percent quota for the OBCs should be made more equitable, the specific recommendations were not revealed. But the Adityanath dispensation sat on the report because the Kurmis and Lodh-Rajputs are as important to the BJP’s electoral schema as the smaller and marginal castes and couldn’t be antagonised.

The BJP ignored the warning that was first sounded by a former minister in the Adityanath cabinet, Om Prakash Rajbhar. Like Maurya and Chauhan, he also came from the BSP. He was wooed by Shah before the 2017 polls, cemented an alliance with the BJP and helped the BJP enlarge its circumference of influence in east UP beyond Varanasi and Gorakhpur. Rajbhar quit the government in protest against its failure to implement the recommendations of the Raghavendra Kumar report, kept his party, the Suheldev Bharatiya Samaj Party alive and has now firmed up a pact with the SP.

Akhilesh Yadav, the SP’s president, promised to implement the report if elected to power although like the BJP, he faces the tricky issue of alienating the Yadavs by distributing the loaves and fishes of reservation to the less well-off castes. It’s a small piece with too many claimants and the BJP has to contend with the fault lines that Mandalised politics it successfully co-opted since 2024 under Modi’s leadership has etched.

Crucial to the near revolt by the OBC members is another matter. When Adityanath was chosen over Manoj Sinha and Maurya in 2017 by the RSS to further its Hindutva agenda in UP and convert it into another social lab like Gujarat, was the Sangh unaware of the state’s caste complexities that no party has ever reconciled into a unified whole? Adityanath implemented the Hindutva programmes to the last letter but he also allowed his caste leanings to get the better of a pan-Hindu identity. MLAs frequently carped that he was inaccessible even during the pandemic that ravaged UP. The chickens have come home to roost for the Sangh, BJP and Adityanath. Is the mahant of a powerful “peeth”, used to working like an overlord, the best fit for politics?