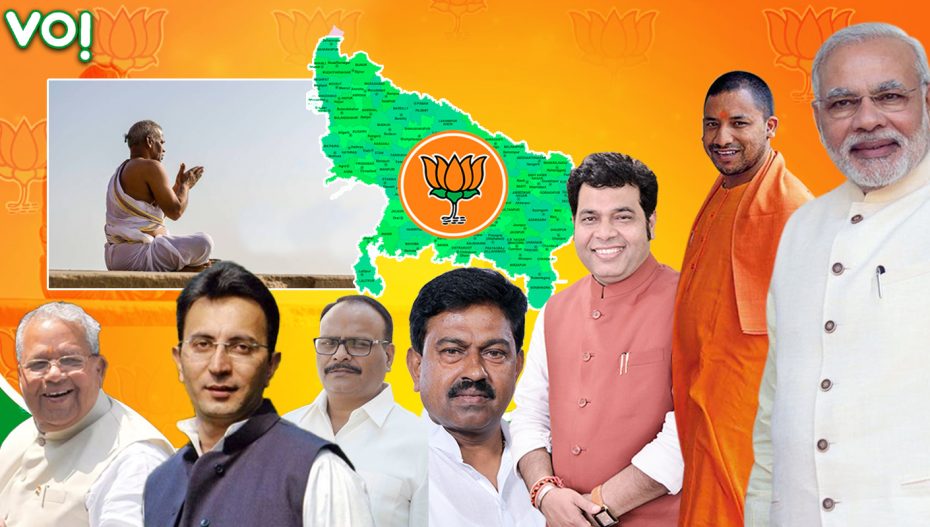 The Uttar Pradesh BJP’s large contingent of Brahmin representatives are upset with the leadership on various counts and in a churn just a month before the state votes.

Their angst and anger poured out on December 25, when the Brahmin leaders met central minister Dharmendra Pradhan who is overall in charge of the state elections. Attended by the MPs (barring Ajay Mishra Teni who is in disgrace after the killing of farmers in Lakhimpur Kheri, his constituency, for which his son, Ashish Mishra, is the principal accused and in jail), state cabinet ministers Shrikant Sharma, Brajesh Pathak and Jitin Prasada as well as Rajasthan Governor Kalraj Mishra—who is still regarded as the only significant Brahmin leader of UP—and Laxmikant Vajpayee, the former UP BJP president, the representatives stressed that under Yogi Adityanath, the chief minister who is a Rajput, a perception had gained currency that the BJP was “anti-Brahmin”. Some delegated emphasised that the BJP was bereft of a “Brahmin face” despite appointing five ministers from the community.

The BJP set up a four-member panel, led by Shiv Pratap Shukla, a Rajya Sabha MP from Gorakhpur and a long-standing Adityanath rival, Gautam Buddh Nagar MP Mahesh Sharma, and state leaders Abhijat Mishra and Ram Mokariya. The committee’s mandate was to “correct” the “Opposition-inspired misconceptions” about the BJP’s “unfairness” towards Brahmins, highlight the construction of the Ram temple and the Kashi Vishwanath corridor as “evidence” of the party’s “unwavering commitment towards Hindutva”, and reach out to the “disgruntled” Brahmin “netas” in the Samajwadi Party (SP) and Bahujan Samaj Party (BSP). The last task was considered significant because over the last few months, the SP attracted a bevy of Brahmin leaders from east and central UP into its fold. Prominent among the inductees was Hari Shankar Tiwari and his sons, Vijay Shankar and Kushal from Chillupar in the Gorakhpur region. Hari Shankar was among the original “bahubalis” of the east who spent long years in the Congress, before switching over to the BSP. The SP also drew in a former MP Rakesh Pandey whose son, Ritesh Pandey, was elected from Ambedkar Nagar in the Lok Sabha polls on a BSP ticket and Digvijay Narayan alias Jai Chaubey, a sitting BJP legislator from Khalilabad. These entrants added to the SP’s Brahmin bench strength because its only known upper caste face was Mata Prasad Pandey, a former assembly Speaker.

At the meeting in Pradhan’s residence, members emphasized the importance of giving more tickets to Brahmins than in the past elections. The demand was a fallout of the SP’s claim that it will give Brahmins a share of tickets in proportion to their population and the BSP’s refrain that if elected to power, Brahmins will be more visibly represented in the power structures than they are presently.

Since 1990, when the National Front-Left Front government declared it would provide 27 percent reservations for the socially and educationally backward classes in jobs in government and the public sector, Brahmins reacted en masse to the implementation of the Mandal Commission’s recommendations by switching their allegiance from the Congress to the BJP in UP. Despite the BJP’s clear tilt towards the backward castes, Brahmins remained wedded to it except when they backed the BSP in 2007 and to a lesser extent, the SP in 2012. In the 2017 elections, as many as 58 Brahmins were elected from the BJP after an estimated 82 percent voted for the party. However, with the anointment of Adityanath as the CM, the Brahmin-Rajput fault lines—rooted deeply in mythology and contemporary contexts—emerged soon enough.

In the absence of an overall caste census (barring the counting of the scheduled castes and scheduled tribes), at best it is possible to arrive at reasonable guesstimates of a community’s population, discounting the tendency of each caste grouping to exaggerate their number. Brahmins are said to constitute between 10 and 12 percent of UP’s population while Rajputs are 7 to 8 percent. Every BJP Brahmin privately pointed out that while the Rajputs had five cabinet ministers including the CM, the Brahmins had “only” four representatives, until Jitin Prasada was absorbed in the last expansion and the “imbalance” rectified.

Religious symbols and iconography are useful to contextualise resentment, especially in UP. One of Adityanath’s first moves was scrapping the public holiday on “Parashuram Jayanti” that upset Brahmins. Mythicised as the sixth incarnation of Vishnu, Parashuram, a lesser-known figure in the Hindu pantheon, was embraced by the heartland Brahmins because he signified a muscular quality that took shape after he annihilated the Rajputs 21 times to avenge the killing of his father by a Rajput king, according to lore.

The SP promised to restore the public holiday to commemorate Parashuram and raise a tall statue of his, if elected to power and the BSP gave similar assurances.

However, caste unrest also needs a contemporary context and living names and faces to propel the undercurrents to the surface, flag them in political discourse and amplify the import. The personas of Khushi Dubey and to a smaller degree, Hari Shankar Tiwari and Mata Prasad Pandey came in handy. The trio has nothing in common except for being Brahmins.

Khushi, 26, is not a politician unlike the other two. She is the wife of Amar Dubey, an associate of Vikas Dubey, the infamous gangster who shot dead eight cops when they came to arrest him in July 2020 from his home at Bikru village near Kanpur. Amar was slain in a police encounter shortly thereafter at Hamirpur. Khushi, who he had married just a week ago, was arrested and jailed. She is in prison although the charge against her as a co-conspirator in the cops’ massacre has not been nailed. Various lobbies, including the All India Brahman Mahasabha, headed by Umesh Dwivedi, a BJP UP legislative council member, had petitioned Adityanath to secure Khushi’s release. The Opposition saw her as a rallying point of anger among Brahmins, especially the women.

The home of Hari Shankar Tiwari, now an octogenarian, was raided because Adityanath did not forget that when Tiwari was an active “bahubali”, he had confronted his guru, Mahant Avaidyanath, in Gorakhpur. Mata Prasad Pandey, 79, was allegedly roughed up by BJP workers when he campaigned for the SP in the panchayat polls.

Isolated incidents but together they added up to a narrative of the “victimisation” of Brahmins, a narrative that was not necessarily backed by hard data but potent enough to stoke the community’s anger. This is why the BJP played safe on Ajay Mishra Teni despite his son’s crime.

The Brahmin vote is an imponderable. The BJP hoped to retain much of it on the back of its Hindutva agenda while the SP and BSP tapped into the community’s anger that was latent at first but bubbled over in the public domain every now and then.