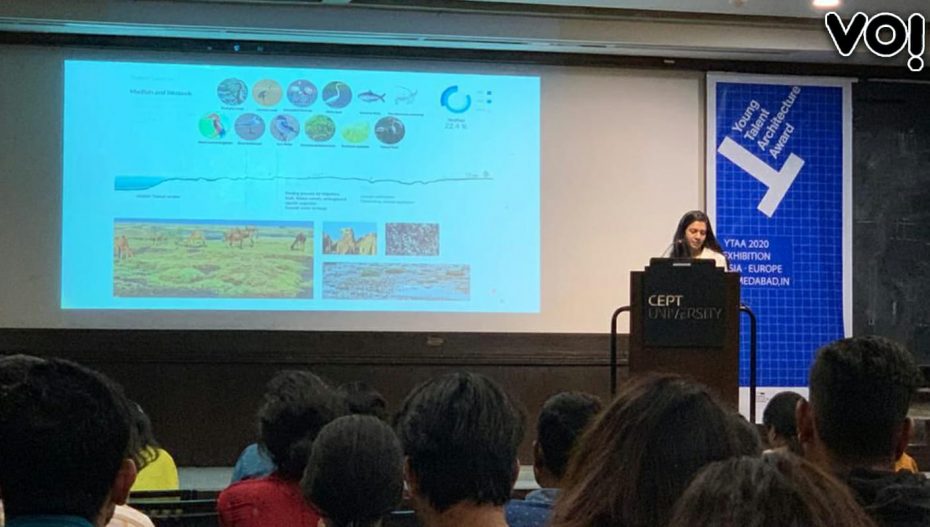 The fortnight long exhibition which will be open for public viewing from 11 a.m. to 7 p.m. till April 30, focusses on the role of informal spaces in modern urban planning.

The first independent Asia edition took place in 2020 and involved the four Strategic Partners of the European Union in Asia: China, India, Japan and South Korea, to promote exchange and cooperation with their European counterparts.

CEPT alumnus Shreeni Benjamin is one of the three winners of the Asian Edition of the YTAA 2020 and the only winner from India. Based on her thesis, Shreeni’s entry focuses on coastal management, which is one of the most important factors to be considered in urban planning for a resilient future. In her project, she aims to investigate the island of Alia Bet, an estuarine island in the Narmada river system that has reconnected with the mainland as a result of anthropogenic changes.

While explaining her thesis,  Ahmedabad based Benjamin who is a landscape architect with a demonstrated history of working in the field of urban design and landscape,

stated that her study is based on ways of reviving the ecological life balance on the island of Alia Bet in the Gulf of Khambhat. The research also focuses on preserving the island from the over-exposure of the salty oceanic water.

Benjamin said, ” Due to the construction of Sardar Sarovar dam, the island is not getting adequate Narmada river water and the place is suffering huge ecological loss. Previously, this place attracted a variety of birds from Siberia as it is situated on a central Asian fly-way. Since the river water is not able to reach there, the place is lacking an important mixture of sea and river water which supports a lot of vegetation. Apart from this, the Jatt Maldhari residents of this island and their Kharai camels are also suffering as those camels depend largely on grass. This project is an effort to revive the island. “

It is worth mentioning that the Jats are a Maldhari cattle-herding group and are mainly distributed in Kutch and Saurashtra. The word “Maldhari” can be loosely translated into English as “herdsman”. It comes from the Gujarati words maal (animal stock) and dhari (owner/keeper).

So, the one who owns animals, breeds them and/or herds them is called Maldhari.

Benjamin said, ” Mangroves play a vital part as defensive fences in the coastal areas. Bur, since the eater has gone, extremely salty mangroves, are not able to thrive there. We will focus on planting another species of mangroves that can flourish in salty water as well. We will plant them in such order that those plants that can sustain salty water will be planted in the first three rows and then we will plant mangroves in the fourth row. This is our first defense strategy. During the high tide, we can create an embankment to stop the seawater on strategic points which will focus on collecting rainwater and will slowly help in reducing the salinity in the water. This can help the vegetation flourish.”

What got her interested in this topic is also interesting.  She recalls, ” My guide talked about this island where there are camels, now since camels are not found in the wilderness and this is the only place where you can find camels that can swim as Alia Bet is inundated during monsoon, they can eat salty grass, they can roam around. This rarity intrigued me a lot so I got more interested and started digging material about this”,  said Shreeni.

It took Benjamin three to four months to put this project together and she took help from the faculty, paid a visit to the Jatt Maldhari communities and spent hours researching the geographical system of the place. A graduate from IPSA Rajkot, 29-year-old Benjamin pursued her postgraduation in CEPT from 2017-to 2019.

The CEPT University was established in 2005 by the Gujarat government to study, plan, design, and construct human habitats.