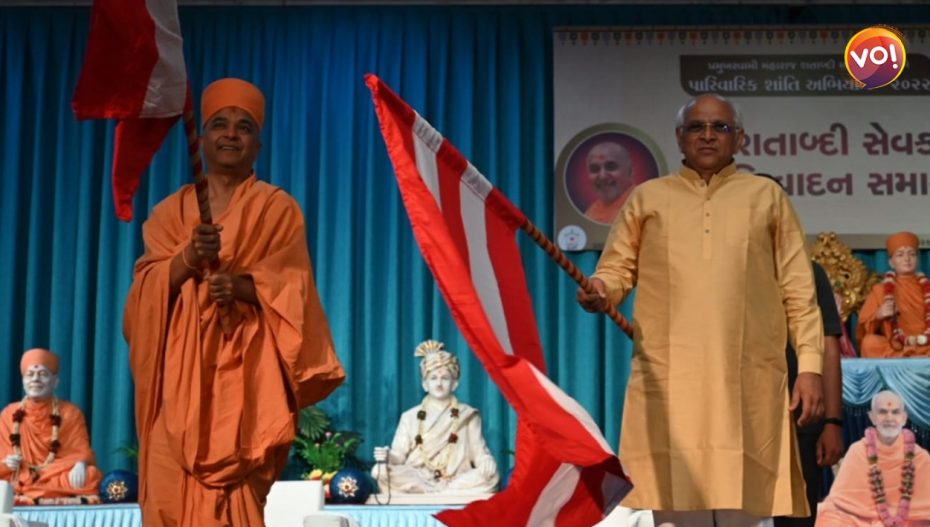 The Chief Minister of Gujarat Bhupendra Patel attended the programme to felicitate the volunteers of the Socio-religious organization BAPS at Ahmedabad. He was accompanied by his cabinet colleagues Jitu Vaghani and Jagdish Vishwakarma. The saints in the top hierarchy of the organisation welcomed them with Kothari swami garlanding the CM and the Education Minister.

BAPS, an organisation founded by disciple of Sahajanand Swami, Shashtriji Maharaj in 1905 now is a mammoth entity with millions of devotees all over the globe. Run by the lineage of spiritual leaders, the sect has enormous clout especially in Gujarat, particularly amongst wealthy Patel community in Central Gujarat and Saurashtra. Sahajanand swami was a wandering monk born in 1781 in Chhapaiya, UP, preached in Gujarat at the beginning of early 19th century.

BAPS known for it’s impeccable organisational acumen is planning birth centenary of late Pramukh Swami Maharaj, the previous head of the organisation in the month of December. In the run up to the event, several campaigns are run. One such campaign is “Parivarik Shanti Abhiyan” ( Harmony In Family Campaign ). The event was organised to facilitate the volunteers who participated in the campagin.

Speaking at the event, one of the leaders of the organisation, Brahm Vihari Swami said that the campaign was carried out by more than 70000 volunteers by reaching out to 24 lakh homes in 10000 villages and cities across 17 states, conveying the message of harmony in family preached by Pramukh Swami Maharaj

The solemn event was also showcased the discipline and power of social unity of the organisation. Touted as one of the most professionally organised socio-religious movement, BAPS stand out in the execution and clarity of it’s campaigns.

Jitu Vaghani, the Education Minister who was involved into a huge controversy due to his insensitive remarks telling those who did not like the education system may go elsewhere, also spoke about the time he spent at the BAPS headquarter at Sarangpur when he was State BJP Chief . Jagdish Vishwakarma, MOS (independent) Cottage Industries, Cooperation, Forest & Environment also spoke about the social work of BAPS.

Connecting to the people gathered in an affable manner, the CM talked about the PM Narendra Modi and praised him as visionary leader. CM said that we all are working for the betterment of society but sometimes a small lapse can harm us. He added that wise people here know what he means. Education Minister Jitu Vaghani was present on the dais. The Chief Minister talked about the planning capabilities of the BAPS and said any assignment taken up by them is executed with precision. The Birth centenary celebration of Pramukh Swami Maharaj are going to be organised at a 600 acre venue in west Ahmedabad near Bhadaj-Science City road from 15 December 2022 to 13 January 2023.