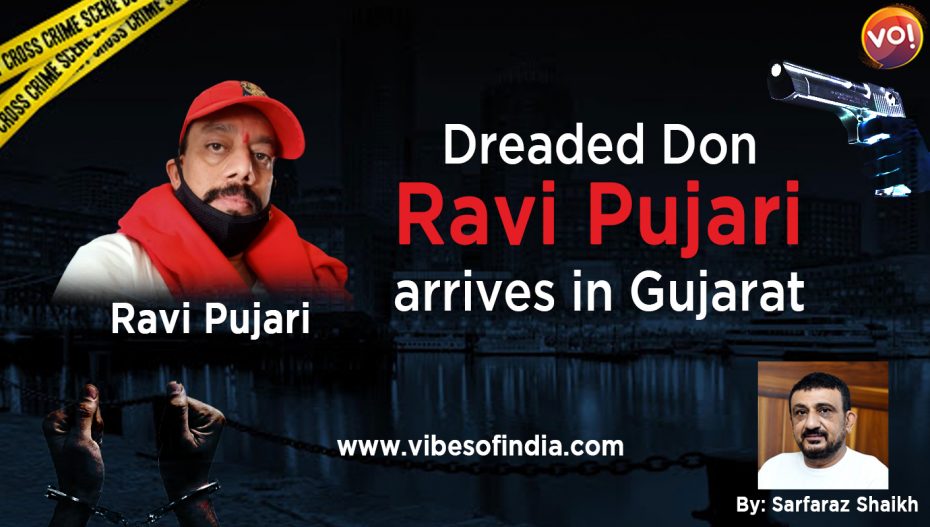 Elusive for 15 years, dreaded don, Ravi Pujari arrives in Gujarat. Born in Karnataka’s Udupi Pujari was once a right-hand man of Chhota Rajan and was shifted to Andheri in Mumbai. Pujari got mired in local gang activities and shot into infamy after allegedly killing a dreaded gangster in the area named Bala Zalte in 1990. Since then, he became a headache for the Mumbai police.

In the ’90s, Chhota Rajan a right-hand man of underworld don and the world’s most wanted terrorist Dawood Ibrahim supposedly based in Pakistan recruited Pujari. Together they created havoc on the streets of Mumbai city killing builders such as Om Prakash Kukreja, for extortion.

After the 1993 Mumbai serial blasts, Chhota Rajan split with the D gang. Pujari and another gangster Guru Satam sided with Chhota Rajan. However, Pujari broke away with Chhota Rajan also in 2006 and formed his gang. He later shifted to Burkina Faso in South Africa and also opened a chain of restaurants there. However, he continued with his nefarious activities.

Ravi Pujari has 39 cases registered against him in Bengaluru, 36 in Mangalore, 11 in Udupi, 49 in Maharashtra and about 26 cases of firing an extortion threat in Gujarat. However, sources from Gujarat Police said Pujari had made threat calls to over 70 jewellers, businessmen, builders, politicians, including some Congress MLAs and professionals in Gujarat. Most of them refrained from lodging police complaints.

“Even three businessmen including a doctor had paid ransom money to Pujari. They were identified later but they refused to complain”, added a senior police official of Gujarat.

After remaining elusive for about 15 years, Karnataka police managed to track him down in 2018 in Burkina Faso in South Africa where he was living under the fake name of Anthony Fernandez. However, before the authorities could reach him, the gangster who had more than 15 red corner notices against him fled to Senegal.

Later he was tracked down in Senegal in early 2019 and detained by Senegal police. “Pujari there also denied that he was Pujari and maintained that his name was Anthony Fernandez. However, the Senegal authorities ruled in favour of the Karnataka police and were extradited to India.

After remaining in the custody of Karnataka police, Gujarat police who applied for his transfer warrant ultimately got success in June 2021 and got his custody on 19th July 2021.

Senior DCP Crime Branch Chaitanya Mandlik said that he was brought to Ahmedabad in a special flight from Bengaluru with enough security and was sent to Borsad. “We will produce him in the court for remand, on July 20, for several cases registered against him”, added Mandlik.

According to crime branch officials, Pujari’s men had made a threat call to Amul MD RS Sodhi on his landline number and asked for protection money of more than Rs 25 crore. “The call was made from an international number and threatened Sodhi of dire consequences if he did not pay the protection money. Sodhi had later approached the police,” said the official.

Pujari is wanted in a firing case on one Pragnesh Patel in Anand, Gujarat

Since 2016, Pujari has been creating havoc in Gujarat. At the end of 2016, Ravi Pujari’s men had shot an independent councillor Pragnesh Patel of Borsad in Anand, Gujarat. He was injured in the firing. Gujarat ATS had at that time arrested Pujari’s sharpshooter Suresh Pillai, Ghanshyam Giri and Shabbir. On the other hand, Gujarat ATS had traced the primary accused Chandresh Patel in Thailand. Patel is still under detention in Thailand. According to sources from the ATS, Prangnesh had defeated Chandresh’s mother who was fighting the elections on a BJP ticket and hence Chandresh had given a Supari of Rs 25 lakh to Pujari to eliminate Pragnesh.