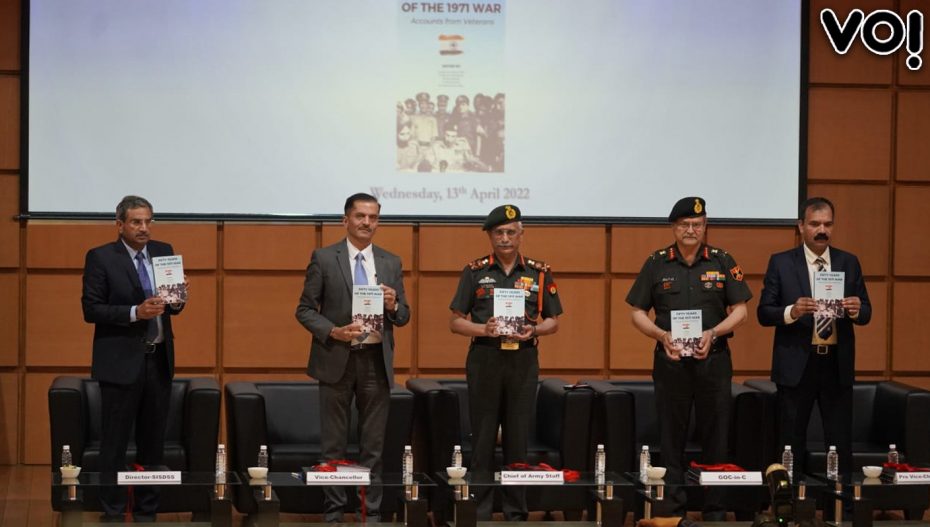 The Chief of Army Staff (COAS) General M. M. Naravane today stressed the need for a stable Army for a peaceful environment in the country. ” Investment in the armed forces is for good returns not a burden on the economics of the nation. All the organs of the nation are a major part of the country and each one of us is responsible for the growth of the nation.”

General Naravane made these inspiring remarks after releasing a book at the Rastriya Raksha University (RRU) in Gandhinagar. Titled ’50 Years of the 1971 war: Accounts from veterans’, the book is authored and edited by the School of Internal Security, Defense and Strategic Studies of RRU.

Formerly called the Raksha Shakti University, the RRU is a central university in Gujarat that specializes in national and internal security. Its motto is ‘ National Security is Supreme’

While addressing the crowd,  General Naravane said that that it was a privilege for him to visit the university. He said that the Indian Army has a Memorandum of Understanding with the RRU and is happy to use various expertise, types of equipment and technologies of RRU. He said, ” I’m sure that future also this partnership will grow much stronger. I have no experiences to share.”

He said that he is always asked by the audience, ‘What would be your message for the youth of the country?’ To this, General Naravane said, ” My message to the youth is that whatever you do, do it because you feel passionate about it, it should be in your heart, don’t do it just because your parents told you to do it, don’t do it out of peer pressure. I see a lot of people becoming doctors and then handing over the degrees to their parents and leave. Hence, when passion is there then you will all excel in whatever field you chose.”

General Naravane emphasized that women get a warm welcome in the armed forces. He mentioned two women who are undergoing training to become pilots.

On this gracious occasion, Lt. General Asit Mistry, the Director of School of Internal Security, Defence and Strategic Studies, said, “The India Pakistan war commenced on December 3 when Pakistan launched pre-emptive airstrikes on a large number of Indian Air Force bases. A swift response to these unprovoked attacks was launched by the Indian Armed Forces on the western and eastern fronts. The defining characteristic of the 1971 war was the coordination and cooperation achieved among the three services of the Indian Armed Forces. This, more than anything else, along with diplomatic and intelligence cooperation made the lightning campaign leading to the liberation of Bangladesh look so effortless. ”

He further said, ” Since December 16, 2020 , SISSDSS conducted a series of 12 monthly webinar series on the 1971 War. Every month we have brought out new aspects of the 1971 war including the key battles.

The first webinar was titled ‘Vijay Diwas 2020: Dawn of the Golden Jubilee year. This was followed by many webinars on themes discussing the – Battle of Hilli in January, Battle of Naya Chor in February, a detailed discussion on the Bangladesh genocide in March, Battle of Basantar in April, Naval operations in May, Battle of Longe Wala in June, Air Force operations in July, Battle of Chamb in August, Battle of Fazilka in September, fall of Dhaka in October and the last on the diplomatic actions before, during, and after the 1971 War in December.”

After the book release, the COAS along with all the dignitaries took a tour of the VAPT lab and CTI lab at SITAICS. Many equipment made by RRU were on display. These were bioelectrical impedance analyzer, spirometry, Viana test system, leg and back dynameter, hand dynameter among others.