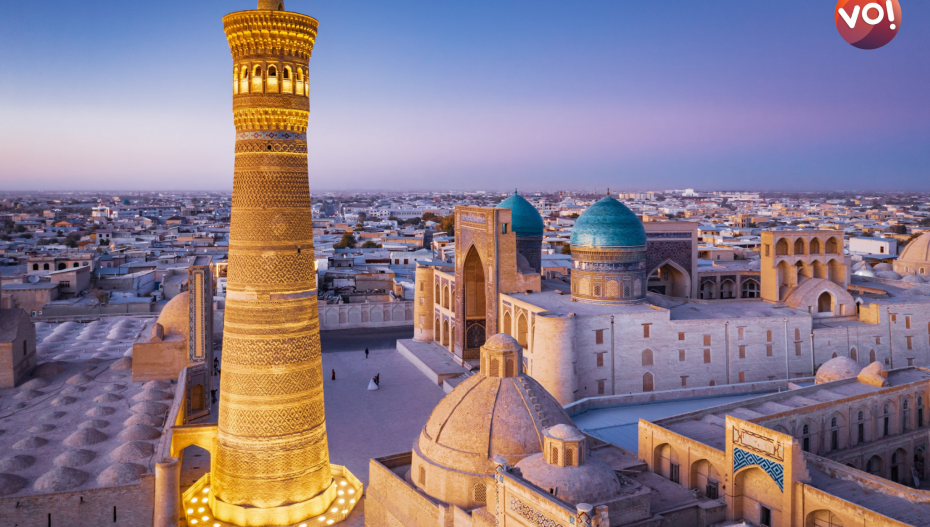 Uzbekistan is a Central Asian nation and used to be part of the erstwhile Soviet Republic. The Uzbek’s culinary repertoire is vast. Food being an intrinsic part of any nation’s culture, in Uzbekistan, the recipes are a delicious blend of Eastern styles of cooking with South Asian herbs and spices, all put together in the quintessential Central Asian meaty stock, pilafs or breads.

1. Plov:  Plov (sometimes also called “osh”) is widely considered to be the national dish of Uzbekistan. It’s a hearty rice pilaf and you’ll probably notice that the word “plov” and “pilaf” are essentially the same. You can expect a generous portion of rice that has been cooked together with lamb or beef, onions. garlic, raisins, carrots, and apricots. Plov is not only the most famous dish in Uzbekistan, it is also one of the most delicious.

2. Shashlik: Shashlik is simply skewered meat cooked on the grill. The word “shashlik”, in fact, is just the Russian word for “shish kabob”, and this style of cooking became widespread in Central Asia during the time of the far-reaching Russian empire.

Given that most Uzbeks are Muslim, it’s unlikely that you’ll encounter any pork while you’re in the country. But if you’re lucky you might be offered some shashlik made with horse meat! Also, if you’re feeling overloaded on meat during your time in Uzbekistan you can often order grilled skewers of potatoes, mushrooms, tomatoes, and peppers.

3. Lagman (Soup): Lagman (sometimes also spelled “lahg’mon”) is served as a hearty noodle stew that includes lamb, onions, carrots, bell peppers, tomatoes, potatoes, and garlic. The rich broth is also seasoned with cumin seed, parsley, and basil. The term “lagman” is derived from the Dungan word, “lyumyan” which means to “stretch the dough,” and lagman noodles are typically hand pulled, giving them a deliciously chewy texture that you would pay top dollar for in Italy or Korea.

When in doubt about what to order in Uzbekistan, lagman is generally a great choice especially if it’s cold outside!

4. Fried Lagman: Another wonderful way to enjoy those delicious hand-pulled lagman noodles is stir-fried. The noodles are pan-fried with peppers, onions, tomatoes paste, and whatever other vegetables the kitchen has on hand. It basically tastes like stir-fried spaghetti. And, if you’re lucky, you might find it topped with a fried egg!

5. Shurpa: Shurpa is an Uzbek lamb soup that you’ll find in almost every eatery in the country. In addition to chunks of lamb, you can expect thick slices of vegetables such as carrots, potatoes, and onions. Spices such as fresh dill and parsley are also used to add flavor to the soup.

6. Dimlama: This is a robust one-pot stew typically associated with harvest time in Uzbekistan. It’s full of meat (lamb or beef), potatoes, onions, carrots, cabbage, peppers, and garlic. To prepare dimlama, all of the ingredients are layered in a deep pan, covered, and simmered for several hours.

7. Manti: Another extremely popular food in Uzbekistan, manti (or “mantu”), are large steamed dumplings filled with ground lamb or beef. Extra fat is often added to the dumplings to enhance the flavor. They are served with yogurt for dipping, and in Uzbekistan, they are traditionally eaten without utensils so don’t be afraid to dive right in with your hands.

8. Chuchvara: Chuchvara are simply smaller versions of manti, and these delicious little dumplings can be served steamed (like manti), fried, or in a soup. It’s especially good when served with a healthy sprinkling of fresh dill on top and is a great starter to any meal in Uzbekistan!

9. Fried Chuchvara: Fried chuchvara is a perfect dish for sharing if you’re dining as a large group as they are much easier to eat with your hands than the steamed version. In Uzbekistan, they are often served at weddings or parties.

10. Samsa: Samsa (also sometimes spelled “samosa”) is another popular style of dumplings in Uzbekistan. Similar to manti, they are filled with lamb or beef and an extra helping of lamb fat for flavor. They are then baked in an oven, resulting in a flaky pastry that is a staple breakfast food in Uzbekistan. In fact, a plate full of samsas and a pot of tea is a very traditional start to a morning in Uzbekistan.