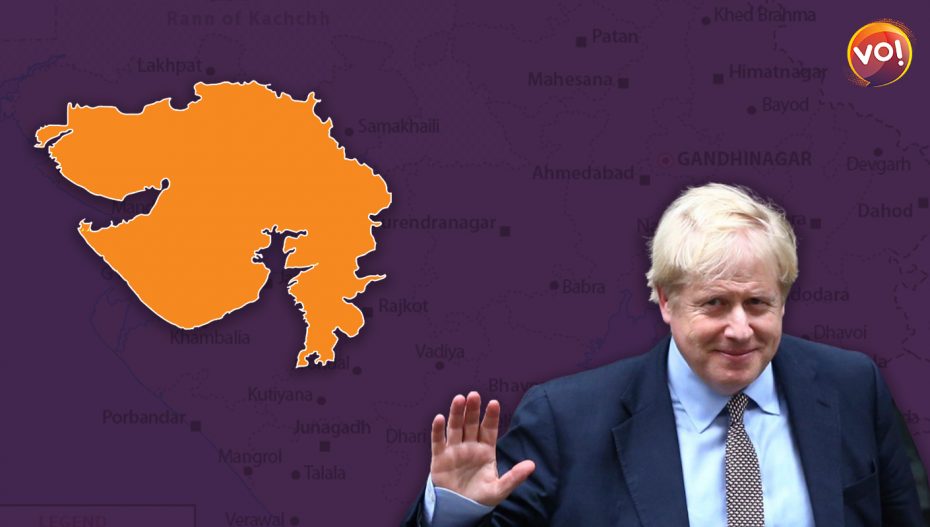 The United Kingdom Prime Minister Boris Johnson will begin his India visit next week from Gujarat. He is likely to land in Gujarat on April 21 and is expected to announce his plans of investment in key industries in Gujarat. Boris will be on a two-day visit in India from April 21-22.

Boris Johnson will be the first British Prime Minister to visit Gujarat. He will meet industrialist Gautam Adani–who recently funded the Science Museum of London to highlight the perils of climate change. The gallery ‘Energy Revolution: The Adani Green Energy Gallery was announced last October when Adani also had lunch with the UK PM.

Apart from Adani, Johnson will visit Vadodara–another business hub in Gujarat. He will be meeting the makers of construction equipment company JCB. JCB’s chairman who is a major donor of the Conservative Party may also accompany Johnson. Another spot for the PM is Akshardham temple in Gandhinagar.

This will be an opportunity for both countries to explore the bilateral Free Trade Agreement that is currently underway. Johnson is expected to announce investment in key industries in both the UK and India.

Everything in Gujarat revolves around business and corporates, the State is also PM Modi’s home state. Another reason for Boris to put Gujarat in his priority list is Gujarati diaspora in the UK. The third largest overseas diaspora of Gujaratis, is in the United Kingdom. At a population of around 600,000 Gujaratis form almost half of the Indian community who live in the UK. Approximately 1.2 million Indians are currently estimated to be living in the UK, including 6 lakh Gujaratis.

During a visit in India, it’s unusual for a Prime Minister to start his visit from any other state but New Delhi. Gujarat is the ancestral home of half of the British-Indian population in the UK and that’s an important reason for visiting this State. India has been identified as a priority relationship for the UK in the 2021 Integrated Review and was invited as a guest to last year’s G7 in Carbis Bay.

Earlier, Boris said,  “India, as a major economic power and the world’s largest democracy, is a highly valued strategic partner for the UK in these uncertain times.”  Job creation and economic growth are two major priorities on PM’s visit to India. He is the first European head of government to visit India since the Russian invasion of Ukraine, something that will dominate the agenda.

The focal point of Johnson’s India visit is bilateral discussions and interactions with Indian business leaders are on the cards. It will cover agreements across a variety of sectors, including defence and security and education.

Last year, twice the UK PM’s India visit was cancelled. First in January, when he was the chief guest at India’s Republic Day, but due to the COVID-19 crisis in his country, it could not materialise, and then in April, when India was in the midst of a pandemic wave.