How A Bereft Teen Ran Away From Home And Was Reunited With His Family: A Tale Of Caution For Parents 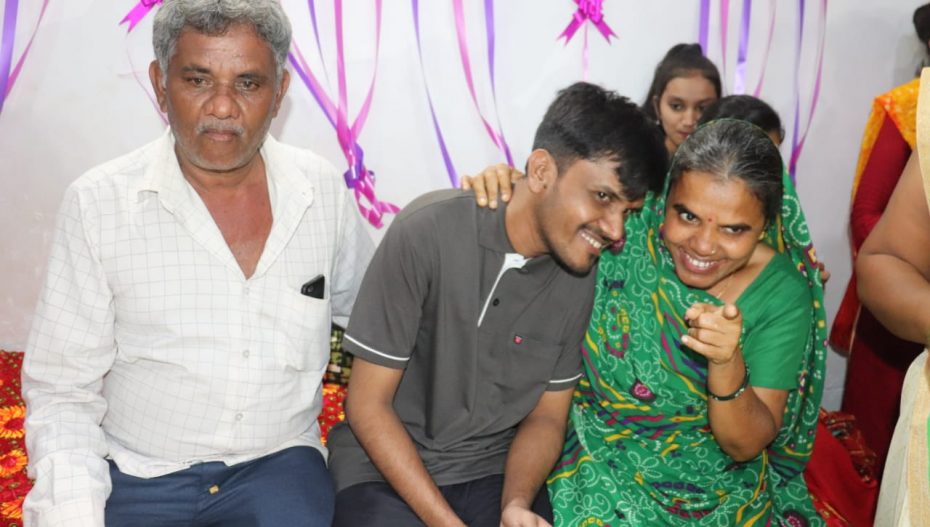 When they found their son living in a slum near Mumbai, the Makwanas couldn’t believe their eyes or hearts. They had last seen him when he was a teenager. He was a now strapping young man of 26. Both Nareshbhai and Ramaben Makwana had not seen Mohit for seven long years.

Mohit, an introvert, had always prefered his own company over friends. After completing his Class 12 in Science from Alpha High School, Junagadh, he enrolled in CU Shah College in Surendranagar for his graduation. In 2014, during his second year of college, he failed his exams. Dejected, unable to bear the humiliation and fearing his parents’ wrath, he decided to run away from home. Mohit’s parents are small-time farmers in Mangrol and to support his education, had moved to Junagadh.

After seven years, a missing person can be declared legally dead. This window closed in Mohit’s case in July this year. It was pure destiny that brought back the boy. When Vibes of India contacted Mohit’s uncle Kiritbhai Makwana, he said, “For seven years, we didn’t see him but didn’t give up hope. We kept looking for him. He is a simple boy who would have one pair of footwear, two pairs of clothes and was content with it. He was depressed when he performed poorly in exams.”

It seems, Mohit found himself in Mumbai – the city of dreams – to find his destiny. He worked at several places, did odd jobs to survive. After working in Mumbai for a few months, he reached Pune. For two years, he worked in a mall. He didn’t have a bank account so would save the cash he earned.

Through his work, he managed to save about Rs 2.36 lakh, and having no one to share it with, he donated it to an orphanage in Pune. After this, he left Pune and decided to move back to Mumbai and got a job in a mall. He didn’t have a roof over his head and therefore slept in the mall after work.

Even in a new city, strangers can become friends and that’s what happened to Mohit. He found his guardian angel. Salim Shaikh, who also worked in the same mall, noticed Mohit and lent a helping hand. Eventually, they formed a personal bond and Salim invited Mohit home for lunch. Salim and his wife Reshma didn’t have a child. Their parental instincts kicked in when they learned that Mohit had nowhere to go.

The couple had a vacant flat in the outskirts of Mumbai which they offered to Mohit.  Salim and Reshma generously offered him food, a fridge, television and parental care. Reshma kept in touch with Mohit through weekly phone calls and also insisted he reach out to his parents as they must be concerned about him.

Meanwhile, Reshma had to fly to Dubai for work and Salim got into the catering business. During Covid-19 lockdown, Mohit lost his job and he had little savings by his side. When Reshma found out, she went out of her way to help Mohit. She sent him Rs 3 lakh and insisted again that he meet his parents.

Mohit’s family had filed a missing complaint with Surendranagar Police Station but even after two years, they couldn’t trace him.  Their family then requested the Home Department in Gandhinagar to transfer this case to CID.

DSP Junagadh, Vasamsetty Ravi Teja IPS (Gujarat 2015) said, “Police force worked on this case for seven years. This was totally on humanitarian grounds. Everyone assumed Mohit is dead or stuck in a bad situation but this incident came as a pleasant surprise. Mohit came to meet me two days back and we had a good laugh. I told him, next time if you feel like running away please come to meet me first.”

DySP Jugal Purohit had worked on this case when he was a police inspector at CID, Gandhinagar. “Recently, the family approached me again to help them out but the case was registered in Surendranagar Police Station and that didn’t fall under my jurisdiction. However, human life is more important than jurisdiction. Considering the sentiments of the family, we got on the case again.”

The police had Mohit’s Aadhaar number so they went to a nearby vaccination centre and requested them if they could check the vaccination status linked to it. To their surprise, Mohit had taken the Covid vaccine at a centre in Thane, Maharashtra. It was a significant discovery. Purohit requested Junagadh SP Raviteja Vasamshetty if he could further probe the case. After getting the details, he also got in touch with his batchmate in Mumbai. The location of the centre was found to be near Ambernath, the local police were informed and Mohit was traced to a nearby slum.

Purohit and the Makwanas immediately went to Mumbai and brought him home. “Mohit’s parents couldn’t stop their tears when they met SP Ravi Teja sir. Their son’s appearance had changed and so had his life but they were overjoyed with the reunion,” said Purohit.

Mohit’s uncle Kiritbhai Makwana said “When Mohit was in Mumbai, he came to Junagadh twice. He sat at the railway station and wept but couldn’t gather the courage to meet his parents and apologise. Even when he was in Mumbai, he talked about his days of loneliness and how much he missed his family. It’s been four days that he has returned home and there are hundreds of people who have come to meet him.”

“As a family, we have learned our lesson: never put pressure on your child. You might dent a fragile mind. This is Mohit’s second life and it will be full of gratitude,” concluded Kiritbhai.