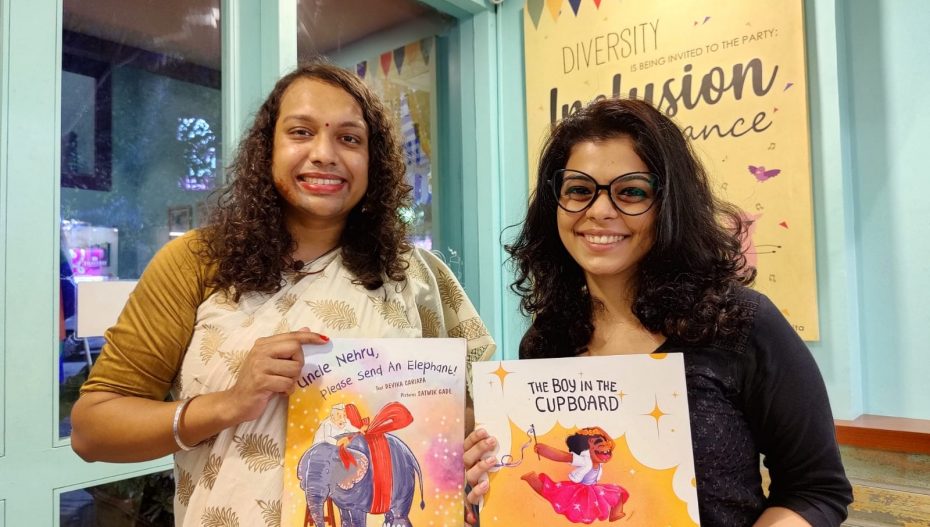 The recently formed LGBTQIA+ Cell of the Indian National Congress celebrated Children’s Day in an unusual way in Mumbai this Sunday. It organized “Chacha Nehru Story Time,” a book reading session by transgender activist Nishtha Nishant in Café Arpan in Juhu. Ten children in the 6-12 age bracket attended the event, with their guardians in tow and according to Mario de Penha, the prime mover behind the event, “Nishtha was a big hit with the children, and with their parents. They had never met a transgender person before. This was an educative experience.”

The Congress has plans to introduce much bigger LGBT-inclusive interventions in Maharashtra, where it is a coalition partner in the government. State education minister Varsha Gaekwad, who belongs to the Congress party, is set to introduce a training program for teachers, where they will be sensitized on how to engage with children who are “different.” The party is also trying to educate its own party members, who are largely clueless on LGBT issues.

“It will take time to sensitize the average Congressman,” says Mathew Anthony, who heads the Mumbai unit of All India Professionals Congress (AIPC), under whose aegis the LGBT Cell functions. “Political parties have never considered LGBT people to be a significant voting community, so they have been ignored. But then, even Catholics and Parsis are considered insignificant as voters. We’ve created this committee for LGBT Affairs because we believe in inclusiveness.”

Chaired by Shashi Tharoor, the AIPC is a pan-India organization, whose aim to bring middle-class professionals into the political ambit. Anthony is a lawyer by profession and though he is not a part of the LGBT community himself, he has been instrumental in recruiting a few key members into the cell, who are now in touch with others in the LGBT community.

Started in January, one of the major initiatives of the LGBT Cell was the hoisting of the Rainbow Flag at Congress Bhawan in Pune in June, to mark the third anniversary of the repeal of Section 377 by the Supreme Court. This involved an enormous amount of lobbying, as Shyam Konnur of the Pune LGBT Cell explains: “The only flags that had ever been hoisted at Congress Bhawan were the national flag and the Congress party flag. Hoisting the Rainbow Flag was big thing. We had to meet all the senior Congressmen in Pune and convince them. They all welcomed the idea, but the whole process took a lot of time.”

Konnur is the founder of MIST Foundation, an on-line LGBT collective that operates from Pune, Bangalore and Hyderabad. In the aftermath of the Supreme Court verdict, several political parties sought Konnur out for his social activism and organizational abilities. “The NCP and Aam Admi Party (AAP) invited me to join them, but I finally decided to go the Congress,” he says.

Both the Congress and AAP have LGBT Cells in Delhi and have been organizing online seminars during the pandemic. What about the BJP? “They seem to be focused on the traditional transgender community rather than the LGBT community as a whole,” says de Penha.

Nishtha Nishant is by no means a traditional Indian transgender. She is a research scientist, with a job in a well known laboratory in Navi Mumbai. “I’m glad the political parties are making these efforts. I’m happy to help, but I’s rather not join any one party,” she says.

At the Café Arpan event on Sunday, Nishant read two books. The first was “Uncle Nehru, Please Send an Elephant,” by Devika Caripa and Satvik Gade, which is about Nehru’s “elephant diplomacy,” where he would gift Indian elephants to zoos in various countries. The second book, “The Boy in the Cupboard” by Harshala Gupte and Priya Dali, is closer to Nishant’s heart. It is about a boy who likes to dress as a girl. Other children mock him when they find out and he hides in the cupboard, until his parents coax him out, promising unconditional support. “It is a moving story,” says Nishant. “The children asked me if I had suffered the same way and I told them I had, but I had family who supported me, so it was okay.”