I was working on an Ambani story when Pegasus hacked me 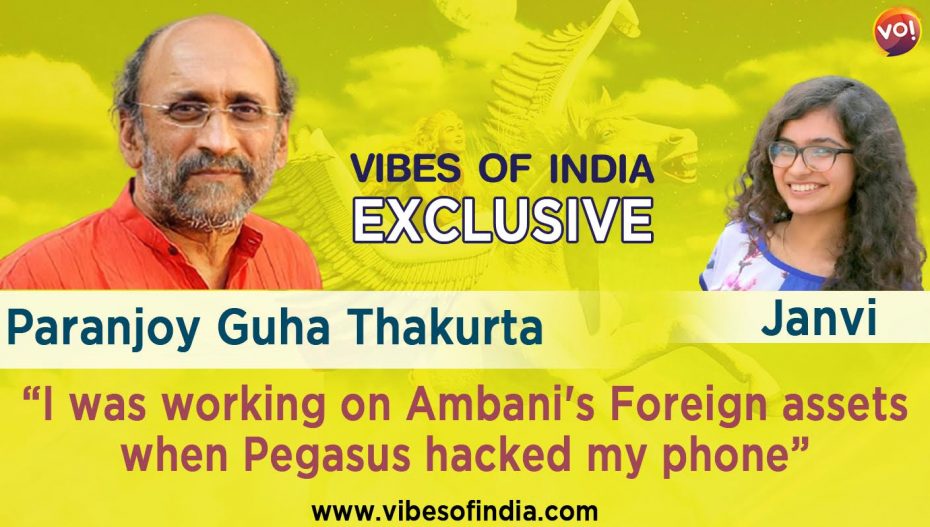 Senior journalist Paranjoy Guha Thakurta was working on an important story on the foreign assets of the Ambani family when Pegasus, the sinister spyware, hit his phone and kept tracking whatever he was doing. In fact, Thakurta was not aware that it was Pegasus or for that matter any other malware that would have struck his phone. I phones are known to be the safest phones on the globe and hence Thakurta was confident. It is not even 24 hours that Thakurta came to know that it is the dangerous spyware Pegasus that was let loose on him to track his Ambani story in 2018. It took him a year to know that he was being consistently monitored.  An Indian journalist, Sandhya Ravishankar who was associated with France-based Forbidden Stories got in touch with him to inform Thakurta that he was a victim of the deadly spyware Pegasus and he should submit his phone for a forensic inspection.

The forensics of the phone was done at The Citizen Lab based at the University of Toronto in Canada. The technical team was Amnesty International’s.

Janvi Sonaiya and Pooja Kanjani spoke to Paranjoy Thakurta to find out more on this.

“I was working on an Ambani story when Pegasus hacked me”.

Thakurta says, “I was investigating the case of Late Dhirubhai Ambani’s foreign assets and how the Brothers, Mukesh and Anil Ambani transferred from one tax haven to the other in different provinces. It was a sensitive story on the powerhouse company, Reliance”.

Thakurta adds, “I wrote a detailed questionnaire to brothers Mukesh Ambani and Anil Ambani but I got no answers. I eventually published the story three months later on Newsclick in 2019,”

It must be noted that even after this story no tax investigation on Reliance company was not undertaken by the Government who ignored the story completely. Thakurta worked on the story from March-April-May, 2018. He considers this one of the main reasons for the government snooping on his phone.

Another sensitive work was a book he was working on during the time when his phone privacy was compromised. This was about the Indian government-sponsored hate propaganda spread through Facebook and WhatsApp.

“Social media platforms were being used to spread hate speech, fake messages and in an organised way, it is used for spreading personal propaganda. This was another sensitive thing I was pursuing,” Thakurta told VoI.

“I came to know about Pegasus just yesterday”

“In May of this year, a representative of Forbidden stories, a non-profit media organisation based in Paris, France— Sandhya Ravishankar, an Indian origin journalist from Chennai contacted me. She told me about my phone being snooped on. Till yesterday I didn’t know about Pegasus or what the software was but Sandhya and her team convinced me—to give my phone for forensic analysis to understand how my phone was compromised between March-May, 2018.”

“I thought my iPhone was safe but I was told they can snoop into an iPhone also. And this is the time when they asked me the kind of stories I was working on during that time and their probable connection to my privacy being compromised”.

The Modi government has used the Taxpayers’ money for surveillance.

“They (the Modi government ) is neither confirming nor denying that they purchased spyware from some agency. Pegasus software is very expensive; it costs millions of dollars.  In the Indian context, Vibes of India has found out that Pegasus unleashing on any phone or individual costs a minimum of Rs 50 lacs each. Imagine the amount of the taxpayers’ money spent on surveillance on journalists pursuing the truth.

“The software agency just sells their products to the government and not individuals. As a citizen, it concerns me if your money and mine are used to snoop on me. I want to know what’s going on”, asks Thakurta.

“Does the government have the permission to snoop on its citizens? According to the law, prior permission of the secretary and ministry of Home Affairs is mandatory. “Does our government seek permission? We don’t know.”

Surveillance was not used on Godi Media

Thakurta emphasises that Pegasus was unleashed on journalists who were working on sensitive stories, stories that would embarrass the government and the few selected government favourite corporates.The blue-eyed ones.

“All the 49 journalists who were snooped working on stories critical to the government.  Is it a criminal offence? Are they all terrorists? Why were they trapped?” Thakurta asks.

Smaller countries like Morocco, Hungary, Mexico, Kazakhstan, Bahrain, Saudi Arabia, Rwanda, UAE, and others were targeted.  The speculation is that all countries with authoritarian regimes have become victims of snooping. Across the globe, over 180 journalists were snooped and 49 are from India. “Here, the real question is those who ask tough questions are under the scanner. People like Akshay Kumar ask, “Aap konse aam khate hain, kese khate hain..’ are not snooped. Even someone like Arnab Goswami or the Godi Media didn’t suffer from this breach of privacy,”

Pattern in the surveillance?

Thakurta has also observed a pattern in the way this surveillance is taking place.  “We need a joint parliamentary committee and an independent organisation to identify the authenticity of these government claims and counterclaims. The surveillance followed a set pattern of targeting individuals who questioned the government.”

Phone tapping in the past

Thakurta agrees that his phone can be legally scrutinized, but the prerequisite is “Was this in public interest? Even in the past phones have been tapped, Former chief minister of Karnataka, Ramkrishna Hegde had to resign from his post due to a phone-tapping scandal, former corporate lobbyist Niira Radia’s phone was tapped and the PM had to order an inquiry in the matter and other cases. The only question here is where the laws followed?”

“Not just as a journalist but as a citizen of India, I’m concerned about the future of world democracy, freedom of speech, and the future of journalism.” Thakurta signed off.