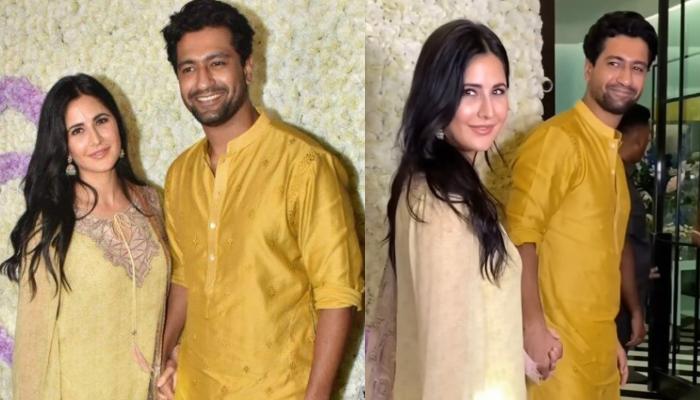 Katrina joined her husband Vicky Kaushal wearing a lovely lime-yellow ‘Sharara’ with a poplin lycra dupatta. This Tarun Tahiliani set was worth INR 89,900. Meanwhile, actor Salman Khan too was seen posing for paparazzi in his white-shirt paired with blue-jeans.

Every year, Ganpati festival is celebrated in full spirit across Maharashtra. It’s a 10-day festival that observes the birth of Lord Ganesha, the god of wisdom and prosperity. This year, celebrations for Ganesh Chaturthi began on August 31 and would conclude on September 9, when the Ganesh Visarjan will take place.

Katrina Kaif married Vicky Kaushal in December last year, after dating him for 2 long years. They hosted a big, fat private wedding in the presence of family members and a very few friends from across the film industry in Sawai Madhopur, Rajasthan.

Katrina Kaif and Arpita have been very close friends for the longest time, but she wasn’t invited to Kaif’s wedding with Vicky Kaushal last year.

Bollywood actor Khan had introduced Katrina into the industry and they were said to be dating for a few years. The duo have co-starred in films such as Ek Tha Tiger, Tiger Zinda Hai, Maine Pyaar Kyun Kiya and Partner among others.

Salman Khan has also made guest appearances in several films that have featured Katrina. The duos were last seen together in Bollywood’s movie Bharat.

They will be seen in Tiger 3, the third part directed by Maneesh Sharma, slated to be released in theatres on the occasion of Eid on April 21, 2023, in three Indian languages- Hindi, Tamil and Telugu.