Love Is In The Air: Gujarati Couples Hire Helicopter For Their Wedding Day 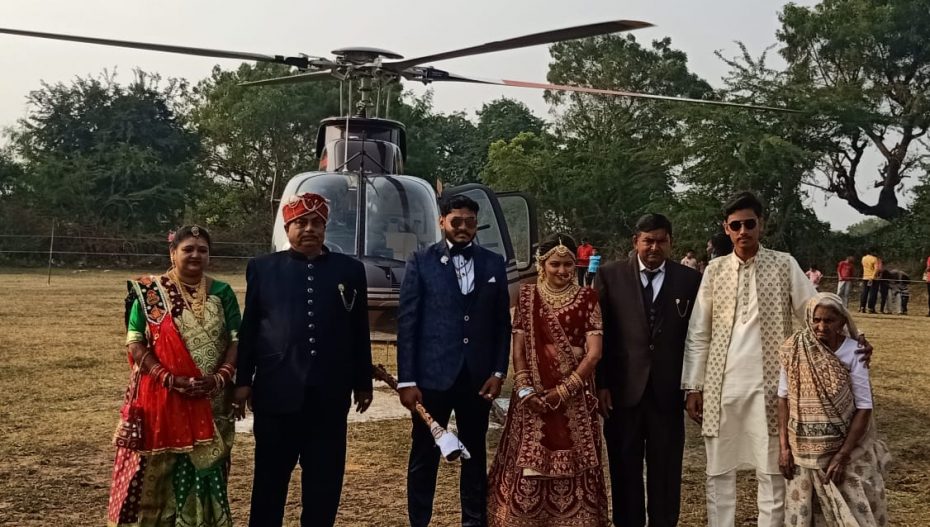 The idea of Big fat Indian wedding is getting a makeover. Now, the groom arriving in a luxury car seems like a thing from a bygone era. Couples in Gujarat are increasingly hiring helicopters to make their wedding filmy. Recently, the villagers from Hadiyana village, Jamnagar district were amazed at the arrival of the groom in a helicopter. Situated 25km from Jamnagar, Hadiyana houses around 1000 families and a helicopter landed in their village for the first time.

The Parmar family of Satwara Samaj in Hadiyana village organised the wedding. Though the family is currently in Kandivali West; parents Varsha and Hemraj Parmar wanted to celebrate their daughter Priya’s wedding in their hometown.

On Sunday morning, the groom arrived in a helicopter from his hometown Chela village to Shri Kashi Vishwanath Mahadev Mandir, Hadiyama with the family. He received a grand welcome from the villagers.

The wedding procession is also a first for residents of Jamnagar’s Chela village. Rushirajsinh Mahendrasinh Jadeja aka Jayrajsinh, the groom, who hails from Kunad village near Jamnagar, arrived in a helicopter to the bride’s place. Most residents of Chela village saw a helicopter for the first time. They were later left amazed when the groom and his family showered currency notes of Rs 500 and Rs 2000. Village sarpanch Rajendra Bhatti said that they must showered currency worth around Rs 35 lakh.

Commercial business of helicopter rental services for marriage are also booming In Gujarat. The charges are Rs 50,000/10-15 minutes. It has the sitting capacity for three people.

In another incident in Vanzar village, Aravalli, the bridegroom came to get married in a helicopter. A young man named Dheeraj Chaudhary was greeted in bollywood style and a huge crowd flocked to the village to witness the sight.

Earlier too Gujarat was soaked in one of the most lavish weddings of all time. Rushiraj Sinh Jadeja, the social media influencer who is known for his love for high-end cars and horse riding had a wedding where his fans showered almost Rs 1 crore in the form of Rs 2000 and Rs 500 notes.

The ceremony that was held 20 km away from Jamnagar in Chella village had the baraat flown in by helicopters. There are videos of Jayraj getting to his wedding venue in a black helicopter on TikTok platform.