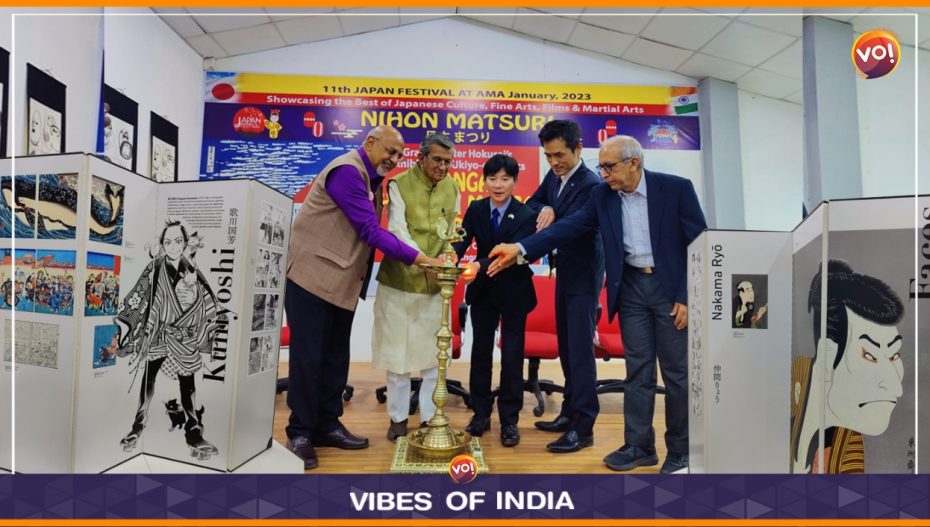 The Japanese Manga is an art form of pictorial storytelling and now, you experience a glimpse of this revolutionary art in Ahmedabad. To mark the 70th anniversary of the Establishment of Diplomatic Relations between Japan and India–the Consulate-General of Japan in Mumbai has organised the international travelling exhibition in Ahmedabad. This was earlier on display in Chennai, Kolkata and Mumbai.

The Japanese Manga is the art form of pictorial storytelling which has evolved over the years in Japan. Manga art has its roots in ancient Japanese Art. The term Manga is used in Japan to refer to both comics and cartooning. The origins of Manga can be traced as far back as the 12th century. The exhibition also displays Artworks by Artist Katsushika Hokusai who laid the foundation for the Manga movement in Japan. Katsushika Hokusai or popularly known as Hokusai was a Japanese Ukiyo-e Artist of the Edo period.

The meaning of Ukiyo-e is ‘pictures of the floating world’. Ukiyo-e laid the foundation for the Manga movement in Japan. The tradition was followed by Master Hokusai’s “The Great Wave off Kanagawa” and artist Hiroshige’s “The Fifty three Stations of the Tokaido.” Manga represents all that is fragile, whimsical, funny, prosaic and entertaining. It paves a brave and revolutionary artistic inroad into a world that transforms the fleeting into something enduring, abiding and artistic.

The self-explanatory exhibition is divided into four parts that will walk you through the history of Manga and Hokusai’s Manga. The first part ‘Hokusai Manga: Funny Pictures?’ shows block printed figures on 15-stitched-bound volumes while also explaining the etymology of the term ‘Manga’. These block-printed images are portrayed every-day-life in Japan and Hokusai’s version of it.

The second part ‘A Character Named Hokusai’ displays several contemporary Mangas which featured Hokusai as a part of their narratives. Some of the manga artists who incorporated this are – Kamimura Kazuo, Sugiura Hinako, Ishoinomori Shotaro, Samura Hiroaki, Sakura Sawa, and Saeki Konosuke.

The third part ‘Manga Like Ukiyo-e, Ukiyo-e Like Manga’ explores the Manga techniques like- balloons, symbolic lines, paneling, and eye size. The fourth part ‘Hokusai Manga: Shared Manual!’ displays the playful side of Hokusai’s Manga. Towards the end of the exhibition, people can see various famous Manga.

The exhibition is open to the public at Ahmedabad Management Association from 12noon to 7pm.

Raja Ravi Verma's Painting Made For Maharaja Of Ba...