‘Mahatma Gandhi Was Sad About Chauri Chaura Massacre In UP As Britishers Had Died’, Claims Gujarat School Teacher 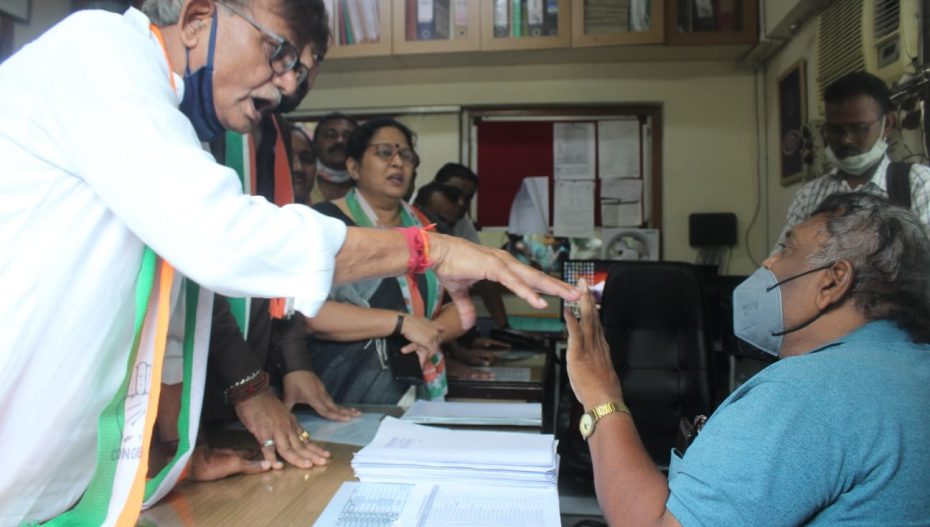 Mahatma Gandhi didn’t mind if Indians die but Britishers shouldn’t die; that’s what Mahatma and Nehru believed. Mahatma was sad about the Chauri Chaura massacre in Gorakhpur as Britishers had died.  Dono ki mili bhagat, a Social Studies teacher has been recorded making a series of comments on Mahatma Gandhi and Jawaharlal Nehru–which clearly were not linked with the syllabus. In the three short videos, the teacher commented that any number of Indians could have died, but Britishers should not have died.

Parth School of Science and Competition in Karelibaug, Vadodara has run into trouble due to their teacher, Raj Bhatt who made such objectionable remarks about Mahatma Gandhi and Jawaharlal Nehru while conducting a class.

While teaching Social Studies to Class 9 students Raj Bhatt said, “Gandhiji promoted Swadeshi, Nehru was fond of Videshi. Nehru used to smoke imported cigarettes from Britain and a special plane was sent to fetch them after he became the PM. Ironically, back home, Indians used to beg for food. Even the parties and celebrations of his kids took place in a chartered plane and then they claim ‘hum garib pariwar se aate hain’. Do you think there are any poor families in Congress? Mahatma was sad about the Chauri Chaura massacre in Gorakhpur, UP as Britishers had died. Mahatma didn’t mind if Indians die but Britishers shouldn’t die; that’s what Mahatma and Nehru believed. Dono ki mili bhagat.”

“Earlier there was Hindu-Muslim unity, there were attempts to eradicate untouchability. Even today there is unity between Hindu and Muslims it’s that some political parties consider these people as their vote banks. Political parties understand that they can survive only if they divide people, they would collapse if they don’t divide.” he said.

The principal of  Parth School of Science and Competition said that the teacher is suspended. In an official statement, he said the organization did not agree with the statements made by Raj Bhatt, a Social Studies teacher– in a video that went viral on social media as his personal views. “We strongly condemn such a controversial statement. The matter has sought his written explanation. Due to his act of offense of misleading students with such statements, we will not hesitate to take strict action against teacher Raj Bhatt.” School administrators have also given due notice to Bhatt on this matter.

The Vadodara unit of Congress submitted a memorandum to the district collector against the school teacher, who made derogatory remarks against Mahatama Gandhi and Pandit Jawaharlal Nehru during an online class session. In their memorandum to the district collector, the Congress leaders have sought action against the teacher and the school. Vadodara Congress unit President said that the teacher has presented a distorted version of factual history and disrespected leaders like Mahatma Gandhi and Pandit Nehru. The teacher should be immediately suspended.

Arjun Modhwadia, Senior Congress member blamed BJP and RSS philosophy for spreading lies in the society. He said, “RSS and BJP are all about spreading lies and many people get brainwashed by the way it spreads misinformation through its IT cell. In Vadodara’s case, it was clear torture on children. It’s their long-term plan to manipulate children and thus sow the seeds of their propaganda. The teacher should be arrested for spreading misinformation. This case should be an example of all the repercussions one can face if such an act is repeated.”

Jignesh Mewani, Vadgam MLA said “This is a strategic move by BJP and RSS to influence young minds and make them anti-Gandhi and anti-Nehru. This unfortunate incident in Vadodara is an outcome of decades of propaganda by the party. Those who focus on Nehru smoking a cigarette do not realise that he spent a decade of his life in jail for our country. While BJP puts Gandhi’s chasmah in Swachh Bharat Abhiyan, they make Gandhi temple but the only philosophy they run on is Hitler and Nathuram Godse.”

Keeping Demands of People In View, Statue of Unity...