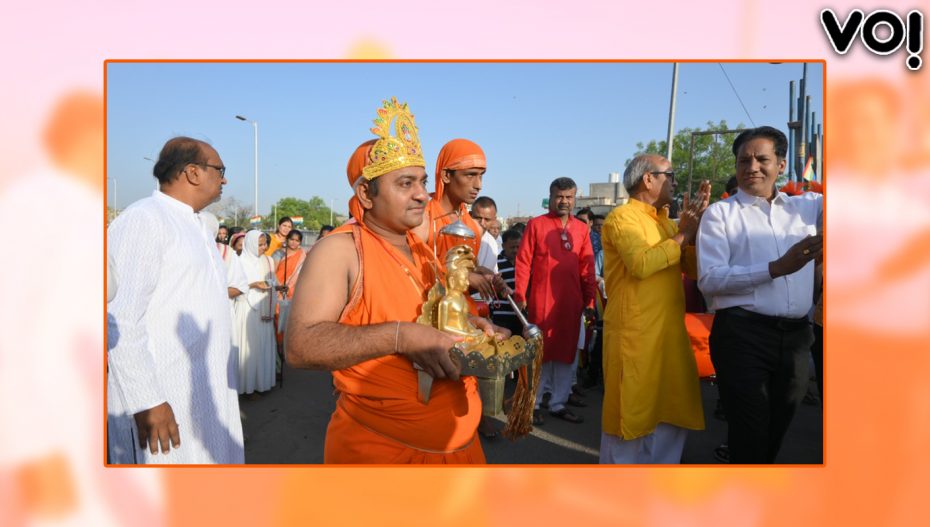 To mark the auspicious occasion of Mahavir Jayanti, an elaborate procession of Lord Mahavir was taken out from the Adinath Digambar Jain Temple in Naroda, early Thursday morning. Hundreds of devotees thronged the entourage while the organising committee was generous with food, Prashad and water for participants and any needy en route to Chamunda Bridge and back to the temple.

The Mahavir Janm Kalyan Rath Yatra was organised by JITO, Jain Yuva and Ahmedabad and Digambar Jain Social Group. For Jains the world over, the day is of special significance as they renew their pledge to live and let live in peaceful co-existence. The procession in Ahmedabad was in full form and force after the two-year pandemic break.

“Lord Mahavir preached ahmisa and equality for all. His message of non-violence and tolerance is especially valid in the present turbulent times,” shared mahant Manilal, who has been in service of the last Tirthankara for over 45 years. He explained that the colourful yatra and chanting of hymns along the way are an overt expression of celebration. “The day also entails fasting and prayers, all a statement of control over the baser self,” he added.

A bit of History:
Lord Mahavir was born in Kundalagrama in Bihar on the 13th day of the waxing moon in the month of Chaitra. He was born as the son of King Siddhartha and Queen Trishala. Mahavir abandoned all worldly possessions for a spiritual path when he was 30 years old and renounced his crown. During his exile, he was involved in meditation and led an austere life for about 12 years before achieving omniscience (Kevala Jnana). He is also referred to as Vardhamana, one with exceptional control over primal instincts. Seeking truth and spiritual freedom, he finally attained enlightenment (nirvana) at the age of 72.