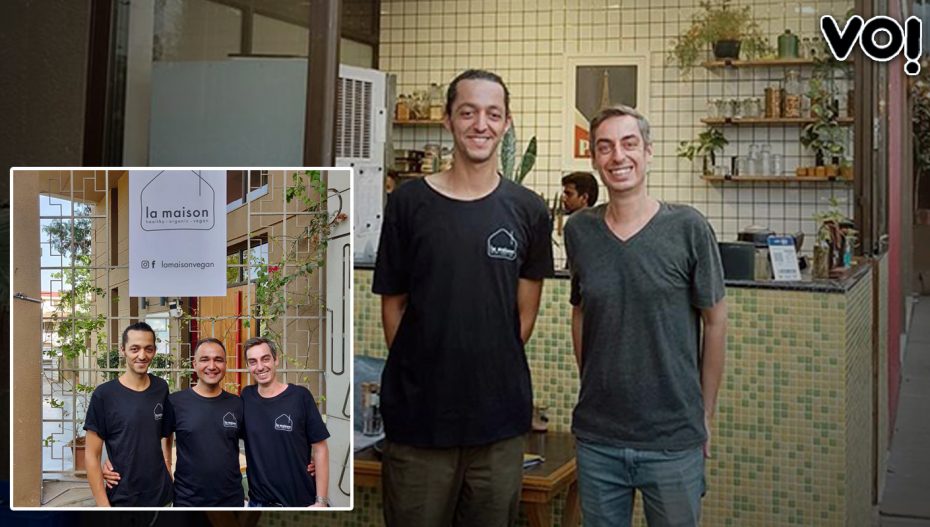 Antipasti Bruschettas. Mushroom Tartine. Avocado Toast. All priced at less than Rs 350. All made by French chefs Flavien Lafosse and Brahim Messaoudene. It was once the prerogative of Ahmedabad’s luxury hotel chains to import Chefs from Europe to serve in their restaurants for limited periods. But now we have La Maison, a casual café owned by two Frenchmen. “The organic, vegan concept sells in Ahmedabad,” says Brahim. “We are making plans to start a second outlet soon.”

A former banker, Brahim, 37, has travelled India widely in India in the past, but this is his first time in Ahmedabad. On the other hand, Flavien, 45, had travelled to Ahmedabad as a professional theatre trainer. “I met our third partner Chintan Pandya here and he suggested we start a vegan café in his Fanatika Theatre. That plan didn’t work out because of the pandemic, and Chintan is now in Paris doing a PhD in theatre production. But then another opportunity opened up at the Alliance Francaise (AF) Ahmedabad and we grabbed it,” says Flavien.

The old café at AF, which served up pastas and pizzas, had closed down in the initial phase of the pandemic and AF director Gael de Kerguenec was looking for alternatives when Flavien and Brahim met him. “We are the first AF in India to have a café run by French people,” he says. “Having a café has always been important to us. It is a place where people can come together, have conversations, exchange ideas.”

With business picking up, the most popular items on La Maison’s menu are Jacque’s Burger, French Apple Tart and La Vie En Rose, an almond milk, rose syrup concoction with chia seeds and beetroot powder. But it hasn’t been easy getting a restaurant going in the midst of the pandemic. An outdoor café, La Maison opened in April 2021 and had to shut down in a week because of the second wave. When it re-started in October, it was open for lunch and dinner, but with the current heat wave, it is now open only for dinner. “Ahmedabad’s weather is so complicated,” says Brahim. “When we opened, it used to be cold in the night. Now it is so hot.”

Both first-time entrepreneurs, Flavien and Brahim’s lives changed when they turned vegan seven years ago. They could no longer eat out since the restaurants in Montpellier, their home town in Southern France, were all non-vegetarian. “We had to learn to cook at home,” says Flavien. “We read many books; we went to workshops. We invited friends and family to try our dishes. French cooking uses a lot of meat and butter, so our dishes were different from what they were used to, but they still liked it. That is how we became chefs.”

The duo is planning to set up a terrace garden at AF, where they will grow vegetables organically. They also plan to organise workshops on vegan cooking and are happy to train other restaurateurs. How do they spend their free time in Ahmedabad? “The café leaves us with very little free time but when we go out, we love walking around the Pols in the old city,” says Flavien. Do they have any favourite Indian restaurants? “We like 1944,” says Brahim.

Besides being the city’s first French café, La Maison is also the first restaurant in Ahmedabad to market itself as LGBT-friendly, which automatically puts in on the map for LGBT travellers. It’s also bringing new event concepts to the city. This Sunday, for example, the café is hosting The Fluid Flip-Flap, where participants can exchange clothes. If you have a shirt or dress that you’re bored of wearing, you can swap it on the spot with someone else at the café.